Portugal penalized by UK for "speaking the truth", claims Algarve Tourism board

The Supreme Court in Spain handed down verdicts of “gross negligence” for the captain, the British insurer, and the owner of the of the Prestige* tanker which sank in 2002.

The vessel went down after being damaged, adrift for six days and then breaking in half. That sent 63,000 tonnes of oil into the sea and eventually onto nearly 3,000 kms of shoreline in Portugal, Spain and France.

It was one of Europe’s worse environmental disasters, with massive damage to wildlife, the environment and to the fishing industry.

The Supreme Court ruling reverses that of a lower court which earlier had acquitted Captain Apostolos Mangouras. Now he has a two year prison sentence.

The court also ruled that both the insurer London P&I Club and the owner Mare Shipping Inc were liable for the disaster.

The London P&I Club could be liable for up to $1 billion (€920 million), though no sum has yet been decided.

For those that still imagine nothing like this could ever will happen off the Algarve or Alentejo coastline, most of the shipping to and from the Mediterranean to northern Europe passes by, including ships carrying crude oil cargos, 200 million tons of oil a year at a conservative estimate.

*The Prestige was a Greek-operated, single-hulled oil tanker, officially registered in the Bahamas, but with a Liberian-registered single-purpose corporation as the owner.

The French, Spanish and Portuguese governments refused to allow the Prestige to dock in their ports.

On November 13, 2002, while the Prestige was carrying 77,000 metric tons of cargo of two different grades of heavy fuel oil, one of its twelve tanks burst during a storm off Galicia, in northwestern Spain. Fearing that the ship would sink, the captain called for help from Spanish rescue workers, with the expectation that the vessel would be brought into harbour.

However, pressure from local authorities forced the captain to steer the embattled ship away from the coast and head northwest. Reportedly after pressure from the French government, the vessel was once again forced to change its course and head south into Portuguese waters in order to avoid endangering France's southern coast.

Fearing for its own shore, the Portuguese authorities promptly ordered its navy to intercept the ailing vessel and prevent it from approaching further.

With the French, Spanish and Portuguese governments refusing to allow the ship to dock in their ports, the integrity of the single-hulled oil tanker was quickly deteriorating and soon the storm took its toll when it was reported that a 40-foot (12 metre) section of the starboard hull had broken off, releasing a substantial amount of oil.

At around 8:00 a.m. on November 19, the ship split in half. It sank the same afternoon, releasing over 20 million US gallons (76,000 m3) of oil into the sea. The oil tanker was reported to be about 250 kilometres from the Spanish coast at that time. An earlier oil slick had already reached the coast.

The Greek captain of the Prestige, Apostolos Mangouras, was taken into custody, accused of not cooperating with salvage crews and of harming the environment.

After the sinking, the wreck continued leaking oil. It leaked approximately 125 tons of oil a day, polluting the seabed and contaminating the coastline, especially along the territory of Galicia. The affected area is not only a very important ecological region, supporting coral reefs and many species of sharks and birds, but it also supports the fishing industry. 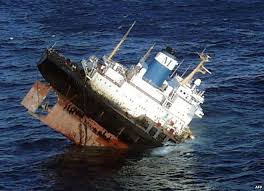 Portugal was 'established' and guarded so diligently by northern European states! .

What kind of nonsense is this?
0 #1 Harry.T 2016-01-27 07:53
This is a classically Graeco - Roman solution to a problem the 3 Governments involved so obviously caused through inept emergency planning. Far more useful would be knowing that a 3 State report has been prepared that examined impartially what went wrong during that week and what precautions have been put in place to make sure it does not happen again.

Ships have needed shelter from storms off the Galician coastline for over 2,000 years and it has always been assumed that a captain makes his way to the nearest safe harbour. After all, having shelter for shipping from storms was the primary reason Portugal was 'established' and guarded so diligently by northern European states!

As always these decisions after the event leave a bad taste in the mouth knowing that this was a situation with a highly probable shipwreck outcome that need not have occurred.
Refresh comments list