At last - Madonna has made her property choice

When I bumped into Madonna at the Ritz last week, I thought she was looking particularly driven. Now I can tell you what must have been on the superstar’s mind, writes James Mayor.

For weeks, Madonna has been keeping Lisbon’s gossip circuit on tender hooks. Everywhere you went people have been asking the same question: “have you heard anything new?”

The cause of this buzz of expectancy has been the pop icon’s protracted search for a property in Portugal. A tornado of rumour embraced a succession of stately piles, momentarily considered and then instantly forgotten: an erstwhile Spanish royal residence in Estoril, a historic quinta deep in the Douro countryside, a mansion in Principe Real…

Now, at last, the suspense is over. The Queen of pop is aid to be buying Quinta do Relógio, a romantic Moorish Revival palacete in Sintra.

The Quinta comes with a price tag of €7.5m, tastefully modest I’m sure you would agree. Although the property is part of the Sintra Unesco World Heritage Site, it has been on the market for several years and will now be undergoing extensive renovation to make it suitably comfy for the star, her children, her partner and their team of minders.

Only last week I was having a drink at the Ritz with a journalist friend. We were in the elegant Almada Negreiros Lounge, tasting an excellent Meruge Branco, from the Lavradores de Feitoria range, when who should whirl past but the superstar herself, easily recognisable despite an enormous pair of sun glasses.

In each hand Madonna clasped the tiny hand of a twin. The trio was followed by Madonna’s partner (looking a little tired, I couldn’t help thinking) and a man in a rather sharp suit.

With hindsight, I now suspect that the sharp suit must have been a real estate agent. This party surged past us with the assurance possessed only by the super-rich and their entourages.

Quinta do Relógio was designed in the late 18th century by the architect António Manuel da Fonseca Jr. in a style similar to the nearby Monserrate and Pena palaces.

In 1886 crown prince Dom Carlos and his bride Amélie d’Orléans spent part of their honeymoon at the Quinta.

It remains to be seen how much of the year Madonna herself will be spending at the Quinta, if indeed she buys it. My bet is that we’ll be seeing quite a lot of the star as it was reported she recently paid a visit to Lisbon’s French lycée. 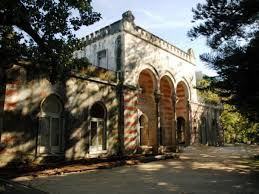 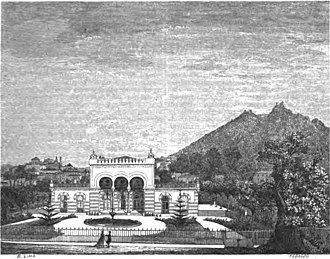