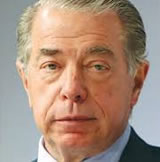 Ricardo Salgado, the disgraced former president of Banco Espírito Santo, currently under house arrest as part of investigations into the collapse of the BES and Grupo Espírito Santo, issued a categorical denial of the accusation printed today in the Sol newspaper.

According to Salgado, the content highlighted on the front page of the weekly is a false and the result of “well-known motives.” In addition to confused facts, the report is nothing but "pure falsehood and fantasy."

According to Sol, five months before the collapse of Banco Espírito Santo, Ricardo Salgado transferred some of its most valuable assets to his wife’s name and those of his three children.

Ricardo Salgado says the Sol report is "not surprising", and today’s headline is just another episode in a saga started by Sol which is controlled by Álvaro Sobrinho, the former president of BES Angola.

In its August 14th edition, Sol published headline, "Salgado transferred fortune to his wife and children," adding that "Ricardo Salgado moved his assets, amounting to €1.8 billion, to his wife and three children before the collapse of the group. But this ploy did not prevent his arrest."

Salgado contends that this report "is false and continues a pattern of behavior whose motivations are well known. The report says that ‘273 buildings and 346 shares in buildings were passed to Salgado's wife, Maria João Bastos Salgado,’ which is a pure falsehood and fantasy.”
Whatever the truth, Salgado will end up in court where these many of these details will be exposed.

The director of Sol, José António Saraiva, refutes the charges levelled by Salgado.

"My independence is known and I have never published news at the request of anyone. The question that arises is whether the word of Sol is true or false, and we have documents that prove unquestionably its veracity. This kind of communicated (from Salgado) aims to question our information, but Sol has proven since its foundation that is not able to be manipulated.”

If the owner of Sol indeed is using his position as media proprietor to claim Salgado has been even more duplicitous that he already is suspected of being, we can expect yet another court case.

+1 #2 Daphne 2015-08-16 09:58
Damien's comment is not as wild as it seems - the Secret Services of the advanced and developing nations are involved in tracking mafiosi corrupt deal money - around the world. Sometimes with different intentions!

Hence we have the British agent mysteriously found dead inside a locked sports bag in 2010.

His specialism being developing software and decoding bank transfers to track suspect money involving the Russians and criminal gangs in Europe.

http://www.dailymail.co.uk/news/article-3199587/Agents-killed-body-bag-spy-got-flat-skylight-destroy-evidence-New-theory-solve-mystery-five-years-later.html
+2 #1 Damien 2015-08-15 16:26
This must be feedback from a foreign secret service - most likely Germany's. Or the UK's or, as Goldman Sachs is involved in reclaiming investments - the US's.

No Portuguese could possibly be involved in unearthing this not actually surprising piece of news. Portugal is a state within a state and Salgardo will have all the best contacts in the 'inner estate' to know if any Portuguese is digging into his affairs.

We need only recall the secret list of special VIP people whose tax affairs were so secret an alert sounded if they were accessed. Clumsily denied. Then it was finally accepted that it existed - but was far smaller than troublemakers in Financas were saying. Obviously the Salgardo's would have been on this list for generations but it would be unlikely the elite would get all their family onto it. Make it too unwieldy.

And, if the list was ever revealed to a tax official with backbone - it would be a giveaway if someone's teenage son, supposedly busy at school, had somehow acquired several million the previous year. From where if not Dad the wheeler dealer - Municipal President doing property speculation during his term of office ?

Or in this case - Dad the billionaire banker planning to bail-out.
Refresh comments list