When thirty-three years ago André Viane first came to Portugal (after living for some time in Spain), he was bowled over by the amazing light and the incandescent sunsets in the Tavira area. As a painter, he knew that he had to escape the dreary atmosphere and gloomy light of Belgium in order to benefit from the Algarvian light. He chose to move to the hills above the quiet city of Tavira and he has now lived there for twenty-nine years. Like many of us estrangeiros, he felt that in the Algarve he had arrived home.

That André was born in Holland was a miscalculation on the part of his parents, since their town of residence was Ghent in Belgium, and he is Belgian, not Dutch.  He contrived to leave school at the age of 17 with no particular training.  But he had a passion for the arts and cinema and like the character in the Italian film, Cinema Paradiso (1988), he learned everything that a projectionist needs to know. For this teenager it was magic to see celluloid stills transferred to the big screen as moving images. Images and imagination that could transport him far away from the cold pavements of northern Europe. The few beers he was given for his help were also attractive.

Although cinema and film constitute André’s main interest, he is also committed to both painting and music. And despite having no training, he managed to teach himself not only to draw but also to play the guitar.

The Northern Renaissance flourished in the fifteenth and sixteenth centuries and in Bruges and Ghent the painters were known as the Flemish Primitives but it was the Flemish expressionist painters of the early 1900s that had most impact on the young André Viane. He was acquainted with modern painters in Ghent, Antwerp and Bruges and picked up many practical techniques from them, and his own interest moved towards magic realism genre, which had developed as an art movement in the years after World War 1.  The term magic realism was coined by the writer Franz Roh in 1925 and refers to work in which some mystery or secret is hidden in quite detailed, realistic subject matter.

He also found himself attracted to the work of the Russians. This attraction is no surprise to the cognoscenti of art because Russian Avant-garde painters used paint-mixing techniques which are similar to those used by the Flemish Primitives. 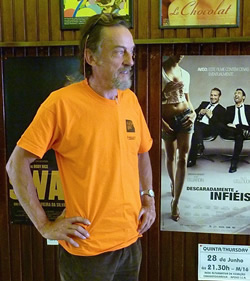 It is not easy to make a living as an artist, but André had already begun to exhibit and make a name for himself in Belgium and when he moved to the Algarve he began to exhibit his work in Quinta do Lago near Almancil.  It took him nine years to build his own house in the hills above Santa Catarina da Fonte do Bispo, whilst augmenting his income from painting by selling his home grown vegetables and rabbits at the local markets. Soon after completing his house he met his partner Cherry.

Although life in the foothills of the Serra do Caldeirão is attractive, he felt the cultural aspects of town life calling.  With very little support from the local Council he organized the International Film Festivals of Tavira in 1992 and 1993, but whilst preparing its third edition in 1994 he was forced to cancel the event because of lack of support and funding. It was then he made a vow to himself that he would not make further efforts to support cultural life in Tavira unless he was asked.  During the electoral campaign in 1998 for Presidente of the Câmara of Tavira, candidate José Macário Custódio Correia met André to discuss his ideas.  Once elected as Presidente, Macário Correia invited André for a meeting and offering him support to organise cultural events, asked him to prepare a project based on what he thought would be important and to inform him about the costs. André was firmly of the view that the weekly screenings of a cinema club would attract a film-going public interested in films other than the Rambos and Rockys  The creation of the town’s Cineclube would provide a weekly input to the cultural life of the town. Influenced by the film seen in his youth, André was creating his own cinéma paraíso. The Presidente was as good as his word and provided André with support for the new venture. 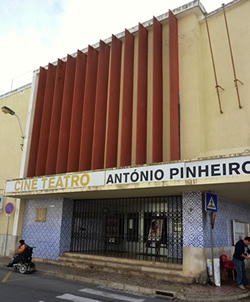 The Cine-Teatro António Pinheiro in the Corredoura of Tavira was remodelled in 1968 and was purchased by Tavira Câmara in February 2001.  It is here that André started the Cineclube’s screenings on Thursdays and at weekends. His personal preferences are for European, Chinese and Japanese films and his favourite film is Love and Anarchy (1973) directed by Lina Wertmüller and set in Fascist Italy just before the outbreak of World War II.  This film was nominated for the Palme d´Or at the 1973 Cannes Film Festival.

In 2005 the Câmara installed an air-conditioning system in the cine-teatro and the Portuguese Film Institute (I.C.A.) installed a so-called digital projection system, by use of which films would be downloaded from the internet but which can be used to screen films in DVD or Blu-ray format only. This system is one of only three digital projection systems in the country and ironically, the I.C.A. has yet to make available any of movies in digital format as it had promised.

Not much caring to travel outside his adopted country, André is nevertheless invited regularly to attend International Film Festivals (Berlin, Tallinn, Kristiansand, Cottbuss etc…) as a jury member for the International Federation of Film Clubs.  For him, attendance at these festivals is food for the soul, since he may indulge his appetite for a cosmopolitan menu of films in the company of people who share a similar passion for the silver screen.

As far as music is concerned, André declares I would like to write my own music but Bob Dylan said it all. His heteronym Boris Buggerov came into being in 1999 at a time when André was trying to raise funds to help the Cineclube.  Since that time Boris Buggerov has been joined temporarily by musicians from the US, Belgium, Argentina, Canada, Wales, Portugal and Ukraine to play American country, rock, folk and blues.  Lately, Boris has concentrated on the works of Bob Dylan. How did André create the name Boris Buggerov?  It seems that the name was born as a joke.  André began to jam with Kevin (mandolin, violin and vocals), a friend of Liz Beaupied, American-born owner of Tavira’s Lura dos Livros Bookshop.  At the first jam session Kevin was constantly ribbing André, to which he responded in a mild English way of expressing displeasure – Bugger off Kevin. When choosing a name for the band, one of the musicians shouted Bugger-off which immediately became Boris Buggerov which sounded Russian enough in the light of André’s love of Russian Avant-garde art. Thus was born the name for André´s band of occasional musicians. 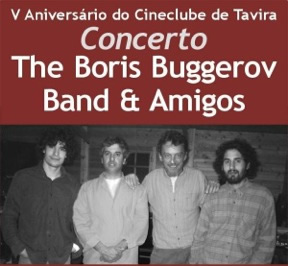 Cineaste, musician, artist and writer, André speaks Flemish, Portuguese, English, French and Spanish and also writes in these languages. He is able to provide commentaries and programme notes on his films and he used to write in general about cultural life here in the Algarve for the local Tavira newspaper and even launched and presented (in Portuguese) his own programme on a local Tavira radio station, significantly called Uma luz na escuridão (A Light in the Darkness).

The annual summer festivals of European and non-European Film were a major achievement for the Cineclube de Tavira. Each year these open air screenings have attracted not only locals and Portuguese but also film buffs from all over Europe, often more than 2400 visitors.  In the year 2012, the Cineclube would have staged the 13th European Film Festival and the 8th Non-European Film Festival. It always has been André’s aim to raise money by means of sponsorship of these Festivals to ensure that the Cineclube was able to run for the remainder of the year without relying too heavily upon financial support from official institutions. Sadly, the Cineclube had to cancel both Festivals this year because the necessary assurances from the Câmara were not forthcoming.

The Cineclube is André’s chief interest and he is now attempting by other means to raise the necessary money to keep it in being.  His plans include more Buggerov concerts, the sale of film posters and an auction of art work.  He is asking artists and the public to donate one painting, sculpture, lithograph, pottery, a photograph, artesanato, knitting (even hand-made machinery, kitchen implements, furniture etc) for auction to ensure that quality cinema continues to exist in Tavira.  (Please contact cineclu@cineclube-tavira.com or cinetavira@gmail.com).  Volunteers are also required to help organise, catalogue and collect items which may be delivered at the Cine-Teatro António Pinheiro by prior arrangement with the Cineclube.  The deadline for delivering items is 29 November, and the auction itself will take place on Saturday 8 December 2012 at 9.30 pm at Casa das Artes in Tavira.

What does the future hold for the Cineclube?  André is pragmatically not looking too far into the future.  Apart from time spent in keeping his Clube alive, André would like to spend more time in playing music and enjoying his quiet life in the hills above Tavira. He wants to paint again, to write and to compose music and, after twenty years of silence, to pick up his radio-programme Uma luz na escuridão.  He feels strongly that the quality of life and the quality of the light here in the eastern Algarve are perfect for him. His home is a peaceful paradise where he can grow his own fruit and vegetables and express himself through his writing, his art and his music. André Viane cannot imagine living anywhere else in the world, and we are lucky that he chose to live in Tavira.