President since the inauguration of the Association in 2006, for 25 years António was also a deputy for the Partido Socialista in the Olhão Assembly.

His mother is an Olhanense, but António himself is a Lisboeta (the nickname for which is alfacinha - a small lettuce), although he remembers spending nearly all of his childhood holidays in Olhão. Only later did he choose to live in Olhão and later still, showed his commitment to the improvement of society. 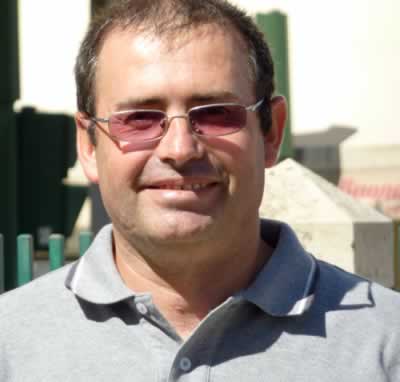 I chose to interview António for get real´s ´Living Legend ´series not just because of what APOS has achieved, but because of the courage, determination and commitment he has shown, in the belief that individuals and organisations without political support can achieve change in society. He has shown enormous moral courage in standing up for his beliefs despite the personal cost and he puts the interests of society as a whole above his own. Anyone in such a position is lonely, as I myself have discovered to my own personal cost.

To achieve success in setting up a voluntary organisation requires vision and genius (genius was defined by Einstein as 10% inspiration and 90% perspiration). Local government support was lacking at first and APOS found it extremely difficult to gain credibility. The motto of APOS is Olhão para Cidadão (Olhão for the Citizen) and it encourages citizens to be proactive in identifying, protecting and valuing their cultural and environmental heritage.
What António has achieved with APOS is remarkable. True, he enjoys the support of a voluntary committee, but all of his own work and commitment has been contributed in his own spare time and he admits that his work with APOS takes about 3-4 hours per day. His fulltime day job is leader of a team of doctors and psychologists in the field of parent support. He sees that our successful future depends on the correct bringing up of today´s children and to him it is even more important than APOS.

Since its inauguration in September 2006 one of the main aims of APOS has been to ensure a high level of communication. APOS communicates with its members, with the public, with the local council and with other organisations through means of the website and internet, local newspapers Brisas do Sul and Olhanense, national newspapers and via the TV. The organisation has arranged cultural visits to Estoi, São Brás, Moncarapacho, Mértola, the watch towers of the area and most remarkably to distant Rio de Janeiro. The visit to Rio took place between 19 and 26 September, 2008 as part of the bicentenary celebrations of the famous trip of the fishing caíque Bom Sucesso. By taking the news to Brazil in 1808 of the defeat in the Algarve of the French invaders, Olhão fishermen earned from the Prince Regent D João a new title for their village, Vila de Olhão da Restauração, a title which it still bears. 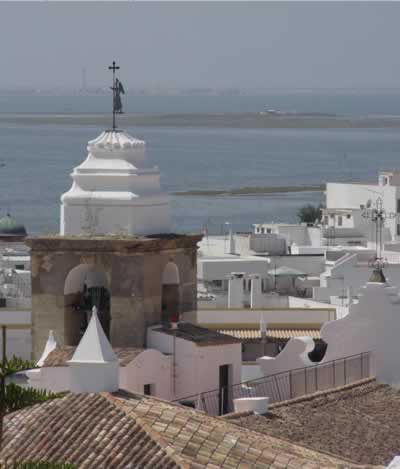 APOS has fought hard to preserve the environment of the Ria Formosa and has followed up complaints by local people about pollution of the natural park and about threats of building development in this protected area. Members also took part in a renewable energy rally between Faro and Quarteira.In terms of the built environment, APOS instituted a process with IPPAR (the Portuguese Institute of Protection of the Architectural Heritage) for the classification of municipal markets as part of the national heritage. APOS has staunchly defended friendless buildings such as Casa Baeta and its priceless azulejos, an outstanding example of Olhão´s architectural heritage. During the construction of the Palace of Justice in Olhão some public benches featuring azulejos by the famous Portuguese artist Jorge Colaço were destroyed. Colaço created azulejo panels in 1907 to illustrate the Battle of Buçaco and they are located in Buçaco Palace, which is now a five star hotel. He also created azulejos for Queen Alexandra, and these panels are now at Windsor Castle. His other great work in Olhão decorates the Casa Baeta, which is nowadays sadly in need of protection. The house is under threat of demolition and APOS is trying to ensure that the Colaço tiles in the Casa Baeta are not destroyed. APOS stands up for the protection of the historical centre of Olhão.

This voluntary organisation has produced a 42 page tourist guide to Olhão. The booklet is in both Portuguese and English and gives not only a suggested walking tour but also has details of local legends. The organisation has also worked with an association of the blind and has pioneered a guided tour of Olhão for the blind.

Many books about Olhão have long gone out of print and are no longer available. Under António´s leadership, APOS has created an e-archive which is probably bigger than that of any other local organisation or of any municipal archive. APOS has made available on-line 27 books including Alberto Iria´s A Invasão de Junot no Algarve and his Do Algarve ao Brazil no Caique de pesca " Bom Successo" em 1808. Also available is the poet Robert Southey´s History of the Peninsular War. These are real gems for those interested in the history of the Peninsular War. The next publication planned by APOS is a drama written just after the first French invasion of 1808 and features the events of that year. This book will be ready by November 2010.

One of António´s most remarkable achievements is the APOS website (www.olhao.web.pt). Here you may find a brief history of Olhão; events; e-books, photographs; details of pharmacy opening times; tide information; what´s on at the cinema; information about the Ria Formosa National Park; information; local legends; local clothes; tourist information; bus, boat and train times; information about the council and you can get information about Olhão´s famous football team. You can also use an interactive map of Olhão to explore its history. Part of the archive of the APOS website is devoted to old photographs, and we may follow through these photographs how Olhão has changed through time. On APOS TV you can watch short films showing the history of Olhão and also find out what is going on in Olhão´s daughter freguesias of Fuseta, Moncarapacho, Quelfes and Pechão.

One of my favourite sections on the website is about those personalities who either were born or lived in Olhão. Not just famous national figures such as the historian Alberto Iria, or the painter Adriano Baptista. We find that José Carlos de Maia was assassinated in 1921; there is Bartolomeu Constantino, the anarchist; Diamantino Piloto - writer and musician; there is the national athletic champion, Francisco Padinha. My two favourites are José Belchior and Felismina Inez who sailed across the Atlantic Ocean in a boat just 6.5 metres long, imitating the journey of Bom Sucesso. They sailed from Olhão to Porto Seguro in Brazil in 1959: it is a story of forbidden love!

Many APOS events give tribute to famous Olhanenses or to those that have lived in Olhão: Dr Francisco Fernandes Lopes (a brilliant scholar with an encyclopaedic knowledge - despite never leaving Olhão); Boris Sossyreff (the would-be king of Andorra who tried to escape to Morocco and ended up in Olhão); Raul Veríssimo (a strong anti-fascist). The ordinary folk of Olhão can be credited with the first uprising in Portugal against the French invaders of 1808. The Algarve became the first part of occupied Portugal to liberate itself and in 2008 the victory was celebrated in an exhibition. If you missed the exhibition, you can still buy the t-shirt.

Close to Africa, Olhão has links across the ocean. The town is particularly famous for its white Cubist houses which are unlike any other houses in the rest of Europe. With their terraces and belvederes these Cubist houses have more in common with houses in the ´other Algarve´, that is, Morocco. Olhão was also one of the last places in Portugal where you could see the bioco in use. This strange item of female clothing consisted of a kind of elongated bonnet, usually worn with a black cloak. The aim of this outfit was to prevent anyone from recognising the female wearer. Used from about 1649 until in 1892 the Civil Governor of the Algarve banned it, this peculiar clothing persisted in Olhão into the 1920s. In intention and practice, it was not very different from the burka used among Muslim women today.

Olhão´s cultural heritage is now valued and the public is much more aware of the history in the town. Over four years as President of APOS, António has successfully proved that it is possible for non politicians to provide leadership and to make things happen and he has demonstrated that effective and responsible citizenship is both possible and important. The statutes of APOS do not allow the President of the organisation to serve more than two terms in office and it is now time to hand over the leadership of this awareness raising organisation.

Dr António Paula Brito de Pina provides an inspiration to all who take a pride in their towns and in their citizenship. He is truly a living legend whose work will go down in the annals of the history of Olhão, and indeed of the Algarve.