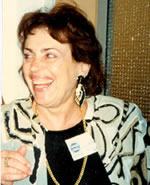 The production of an archive of ´living legends´ in the Algarve has already assumed a different character.  Many people have written to getreal  to urge that the archive should include those concerned with matters other than pure culture.  I certainly agree.

There are masses of people who are working hard and are making a difference to the way of life here in the Algarve.  One of longest serving of these individuals is Nan Richardson, who has been running the Refúgio dos Burros (Donkey Sanctuary) in Estômbar for nearly 20 years.

She receives great support from her partner Peter Lee Lander.  Donkey Sanctuary is something of a misnomer because the sanctuary also accepts dogs and cats.  At present it is sheltering more than 100 dogs and over 50 cats as well as 16 donkeys.  Nan admits that on one occasion she also accepted a hedgehog and on another a seagull.  Ther have always been many cases deserving of the help available at the Sanctuary, but since the announcement of the closure of the animal rescue home at Goldra, Nan, Peter and their helpers have noticed even more pressure.

Nan has lost count of the total number of animals she has dealt with over the 29 years she has been active in animal rescue work.   Nan and Peter lived in the Algarve for 12 years before they bought the 3.5 hectare Quinta São João "to provide a bit more space and we could then stop annoying the neighbours,"  says Nan.  In his previous life, Peter was a farmer and he used to breed horses, and his animal husbandry skills have come in very handy in caring for so many distressed animals.  Peter and Nan are aided by 3 full time volunteers and other volunteers who help on a part-time basis.  Tending the animals, changing their bedding and feeding them is more than enough work for the volunteers who are equally committed to the goals of the Sanctuary. Accepting the necessary visitors and guiding them is a major part of their work

Peter travels all over the Algarve to collect items donated to the Sanctuary.  These items are put up for sale in one of the three charity shops in Lagoa, Corvoeiro and Monte Carvoeiro.  Each  is open every Saturday and Sunday from 10am until 4pm. The other is located in the Commercial Centre of Monte Carvoeiro and is open every day except Sundays, from 10am until 4pm.

Nan and Peter have each invested their own financial resources in their work.  " Even with the contributions made from our shops, it is still difficult to ensure that there is enough money to feed and give medical treatment to the animals," says Nan.  "We have had car boot sales and coffee mornings and we have accepted funding from animal welfare organisations and private individuals. We have had some very generous donations of expensive items, and to make maximum advantage of them, I would really like to hold an auction."  But of course a high class auction needs a high class auctioneer.   Nan and Peter would also be very pleased to hear from anyone with any other ideas of to raise money.

Now that Nan is 81 years old (and Peter is of a similar age), she is looking for someone who can share the management of the Sanctuary and bring energy and drive to make things happen.  She and Peter are concerned for the fate of their Refúgio and its animals when they are no longer there to manage it.  Their ideal would be to create a trust of 3 or 4 people who would commit themselves and their efforts to meet the objectives of the Sanctuary for the foreseeable future.

When Nan and Peter arrived in the Algarve in 1981, they were horrified to find unwanted pups and kittens just abandoned by the roadside.  Great numbers of cats and dogs produced litter after litter, season after season.  At that time the simple Algarvian never thought of any different way of life and in any case there were only three veterinary surgeons in the whole of the Algarve.  "Since then, there have been major improvements in animal welfare," said Nan.  "Every town of any size now has at least one veterinary clinic and there are even travelling vet services. Young people are also more educated about how to deal with animals humanely." The Sanctuary receives frequent visits from students from schools and universities. Nan continued, " Just look at the differences in the shops - in the old days it was not possible to buy special food for cats or dogs, and supermarkets now devote shelves and shelves to pet products."  But even taking into account changing attitudes, animals often arrive at the sanctuary in a pitiful condition.

Some donkey owners behave like the worst dog owners.  When their animals are no longer capable of heavy work, they either sell their donkeys to circuses or leave them to die on old building sites or remote fields.  In this way, owners save themselves the expense of a vet´s fee and the cost of hiring a JCB for the burial.  This problem has happily been brought to the attention of the public and now that the Donkey Sanctuary is more widely known, more people bring old donkeys to the Sanctuary to give them a few years comfortable retirement. Whilst the number of donkeys at the Sanctuary is relatively small, it is difficult to relocate  donkeys to new homes since not only do they need a lot of room but, because they are social animals, it is often better to rehome donkeys in pairs.

Nan and Peter face a continuous battle to withstand the pressures on the resources they have at their disposal and they welcome offers of help, of whatever kind.  For example, the website of the Donkey Sanctuary is an important means for making new contacts, and they have been pleased to accept an offer to update the website and the information it holds.

Nan made an immense impression on me through her commitment and her ability to keep going no matter what difficulties she faces.  When I commented on the on-going nature of the animal welfare problem and her heartbreak at seeing some of the worst cases, Nan said, " I would do it all again!"  Nan Richardson and  Peter Lee Lander and their voluntary helpers deserve pride of place in the annals of Algarve history.  In terms of making a difference, Nan and Peter have certainly improved the quality of life for thousands of Algarvian animals over the last 30 years.  Their example has provided a lead for animal lovers in the Algarve, and they must surely have been instrumental in the change of attitudes towards animal welfare.  But there is still so much to do and there always will be. Despite rehoming an average of only 3 or 4 animals a week, Nan and Peter will ensure that each dog, cat or donkey goes to a good home.

It is with regret that shortly after this feature was published, Nan Richardson died. The following notice was published in Algarve123

"Nan Richardson, one of the leading lights in animal rescue work in the Algarve, has died peacefully aged 80 following a long illness.

When their villa was “overflowing with animals”, they formed APAA (the Association for the Protection of Animals in the Algarve) and shortly afterwards, established The Donkey Sanctuary at Estômbar - still going strong today with the help of volunteers and supporters.

Friends and volunteers intend to build a new puppy pen in Nan’s memory at the Donkey Sanctuary."