Folk Dance Group Of Odiáxere - The Identity Of Our People

To absorb the knowledge of our people and to understand the life they lived, helps us to identify with our culture. This heritage rooted in clothing, music and choreography led Mar d'Estórias to contact Luís Morgado, President of the Folk Dance Group of Odiáxere (Rancho Folclórico e Etnográfico de Odiáxere), to rediscover the daily life of the Portuguese people long ago.

As its name suggests, it is called folklore because the customs, and stories of a community, have been passed through the generations by word of mouth. And we, Portuguese, are fortunate to continue to be in touch with our traditional roots and customs. "We were privileged to have been spared in the two World Wars and the consequent mass displacement of communities" (1)

That is why many of our experiences remained intact, allowing the folk tradition to continue, practically, as it was at its origin, until the end of the twentieth century.

Legalised on the 17th of March 1984, by Luís Bandarra, the Odiáxere Folk Dance Group keeps the folklore of the county alive. To do this, it has been and continues to be necessary to dig into the tradition of the county, through the investigation and gathering of various folk elements. This constant research is made by consulting the local senior people to understand their experiences, the clothing, the traditional dances, the songs and the musical instruments used in the old days:

“We went directly to people's houses; we would take three or four people and an accordionist, and we would talk to them. If they knew how to play, they would pick up the accordion and show us how it used to be. We would take tape recorders and record them, and reproduce later" says the President of the Odiáxere Folk Dance Group, Luís Morgado. After all this data collection, Luís Morgado organises and choreographs the dances. The songs are played with four accordions, triangles, harmonica, castanets and the Portuguese guitar. All playing songs for almost 60 dancers which make up this group. For the latter, it is up to them to dress according to the era. For this, it is imperative to look for representative 19th-century fabrics and ask the seamstress to make replicas of the original costumes, trying to make them as faithful as possible to the outfits of the time.

We realize that this is, undoubtedly, a thorough investigation that captures the spirit of all the villages of the county - "we base what we do on agriculture, the art of fishing and the canning tradition so important, in Lagos". The outfits represent the daily life of former times:

Either in the day-to-day representation of people's work:

And also with their best garments worn on Sundays or on celebration days - see photo on the right. 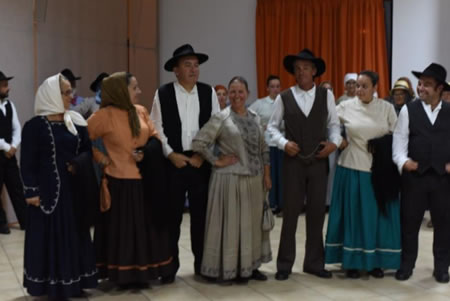 All materials acquired by the folk group over the years have been carefully catalogued in the Ethnographic Museum of the Odiáxere Folk Dance Group, housed in the headquarters of the group.
The truth is that, throughout this small country, there are different experiences from place to place, making the Portuguese cultural heritage even richer. In the North of the 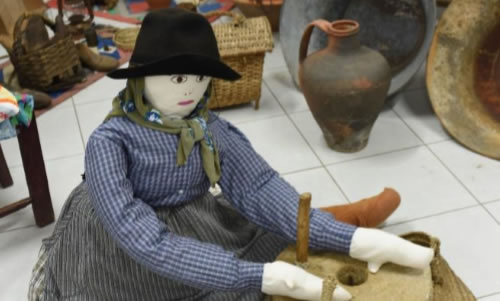 country the tambourines and the drums dominated, in the South the sounds of the strings and the accordions prevailed.
These and other details are analysed by the Federation of Portuguese Folklore so that a group can become federated.

Here, in Odiáxere “We want to make our group known and raise the bar " , hence the costumes, that were initially worn, are nothing like those used today. Today "the outfits are different because they represent the nineteenth century", mentions the President.

A folk group takes all the knowledge of rehearsals and shares it with the world. The spirit of community of these groups is extraordinary, since they do it usually, without great means. Invitations are made between folk groups to perform in their villages, in Portugal or abroad, always with the promise of a future visit by the hosts to 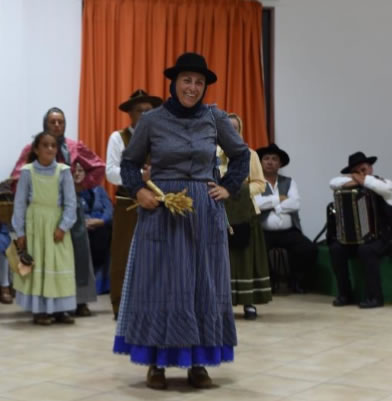 the guests: "Every year in August we hold a Festival where we bring 5 groups. I already have almost everything organised for the 2019 event, "says Luís Morgado.

Another particularity that gives strength to the group is the existing family connection between its members. Many members encourage their children to participate, and they also take their children to the choreography: "We have them
all! Three generations of families to keep the folk group alive. (2)" This is the authentic way of discovering the importance of tradition and the spirit of a place is to" throw a ball" (manda baile), as people of folklore say.

1 Contextualization of Dr Daniel Café (President of the Federation of Portuguese Folklore), in a television interview for the program "A Praça", 27-07-2018.
2 Mentions Luís Morgado in an interview with Mar d’Estórias.

Mar d’Estórias intends to be an innovative place that values everything Portuguese with special emphasis on the Algarve. It was planned to provide a balanced passage between the different areas of the shop, the café/bistro, the art gallery and crowned by the roof top terrace bar with a sea view.