Portugal is rich in fine edifices and down here, on the Algarve, there are some wonderful examples to be found, many with a long and fascinating history, others simply inspired by a passion for decoration. Here are just a few favourites...

There is a small building in the back streets of Faro opposite the Teatro Lethes. The exterior of theatre itself is no beauty. It looks like a South American mission church. But the inscription written large in Latin upon its front wall Monet Oblectando (Education Through Entertainment) is the key to its importance.

The interior is long and narrow and reminiscent of an Amazonian paddle steamer.There are four full tiers of boxes carved from wood, lush upholstery and wrapped around the ground floor auditorium giving it a unique intimacy. The ceiling (see page 12) is something of an art treasure. The Algarve Theatre Company stages a great variety of productions here and it is considered to be one of the most beautiful small theatres in Europe.

But back to the building on the street corner outside. In architectural design terms there is a perfect ratio that creates an aesthetically pleasing rectangle; it is called the ‘Golden Ratio’ and defines the perfect proportions. This building exhibits the phenomenon on both its front elevation on Rua Lethes and its side elevation on Rua de Portugal. The entrance doors and the windows display the same characteristics. There is a fine arched window on the first floor on the front. The entire building is clad in azulejos and a frieze at the top is decorated with ‘Rosalha’ wild flower motifs. The building is topped off with a beautiful ceramic balustrade. It is a modest building that houses a number of small businesses including a barber and a solicitor’s office but it is the symmetry of the design that makes it a stand-out. 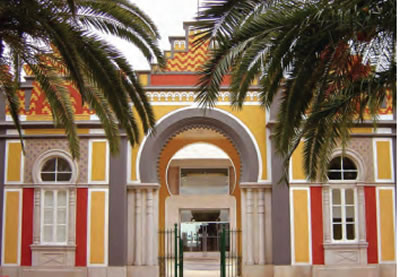 On the river in Vila Real do Santo António stands a magnificent hotel built in in the Belle Époque style. Once known as the Hotel Guadiana, it was reborn as The Grand House with its recent renovation. Originally opened in 1926, it was the first hotel south of the river Tagus and was the brainchild of the fish cannery industrialist Manuel Garcia Ramirez. The Ramirez family were pioneers of the fish trade and contributed greatly to the region’s wealth; now in their fifth generation, they run the oldest canned fish business in the world.

Manuel Ramirez saw the need for a splendid hotel in Vila Real and commissioned the Swiss architect Ernest Korrodi to design this iconic building and invited one of the country´s most successful managers, Konrad Wissman, to run it. It was a resounding success but fell into dilapidation in the early part of this century only to be renovated in the past few years to its current 5-Star status (see the interior on page 26).

Further along the coast we come to Tavira which is a collection of fine buildings with a distinctly eastern feel about its rooftops. The town is a like a museum of architecture with too many exhibits to mention here, but it is a night time that two riverside structures take on a different mantle. The Ponte Romana and the old market building stand out floodlit and reflecting on the river.

On the eastern side of Olhão close to the camping ground stands an intriguing building arranged over three floors and quadrangular in the shape with four façades. The poet João Lúcio Pousão Pereira was born in Olhão in 1880 and was publishing his poems at the age of 12. He later went to Coimbra to study law and returned to the Algarve where his powers of oration drew large crowds to the cases he represented. He conceived the idea of his Chalé in order to concentrate on his poetry following the accidental death of his son.

He sought spiritual isolation in the design of his ivory tower. The four facades face the four points of the compass and the elements of earth wind and fire were represented on the exterior of the building. He moved into his Chalé before it was completed, contracted pneumonia and unfortunately died at the early age of 38. The building is now under the care of Ecoteca and is a centre for environmental education and also a museum dedicated to the poet.

Also in Olhão is the ornate and much-photographed corner building in the main walking street, Rua do Comercio. Built in 1920 and considered to be one of the most emblematic structures in the town, it is topped by a great turret with three arabesque arches, and boasts intricate window detailing and elaborate decoration.

Many fine buildings in many cities have been rendered plain and undistinguished because of their ground-floor tenants. Large plate glass windows at street level filled with garish posters take the soul out of the what should be magnificent spaces. The Hotel Guadiana suffered from the ‘vandalism’ of corporate logos and downtown Faro hasn’t been spared either. But there is one building still known as the Banco de Portugal which is now home to Câmara Municipal de Faro. It is located close to the waterfront at the marina and it is a beautiful building with a masonry portal with a horseshoe arch and a Neo Arab tiled ceiling within, ‘battlements’ at roof level and stone framing around the windows in a neo- Manueline style.

Also in Faro is an unusual edifice that is now the Bibliotéca Municipal de Faro but is also known as O Antigo Matadouro or Slaughter House. It has a curious Islamic-style design and is located in the small Parque de Alameda where peacocks strut freely. The library itself, contemporary and convenient, backs on to it and is accessed from a street behind. Bringing the old and the new together in this way introduces a special personality to the surroundings.

And then there is the remarkable, fairytale-like Palace de Belmarço, heading towards the Faro old town and near the municipal car park.

It was five years in the building, from 1912 to 1917, and the vision of Manuel de Jesus Belmarço, who was born in Faro and made his fortune in Brazil in the coffee and cereals business. He hired renowned architect Manuel Joaquim Norte Júnior to create a vertitable palace, in the revivalist style of the time, with layer upon layer of detail, wrought iron balconies, tiled panels representing national monuments and landscapes and the head of a woman, carved in limestone, beside the main door.

Today, and after considerable rehabilitation works, it is the business headquarters of businessman João Rodrigues who is also looking to transform the former primary school in the area into a luxury hotel.

The inland town – or rather city – of Loulé is rich in beautiful buildings, from its castle that dates back to the 1249 to the sumptuous Gama Lobo Palace which now houses the Loulé Criativo initiative.

But visitors to Loulé cannot miss what is probably the most dramatic market building in the entire country. It was completed in 1908 on a site that was a source of dispute between the two parishes in Loulé , São Clemente and São Sebastian. The cost of its construction was going to exceed the budget and so two turrets were removed as were all the proposed tiles for the cladding. The Arabian-inspired revival style design received a boost when the original plans from 1905 were reborn in the early years of this century and the two grand turrets on the southern elevation were finally built.

The Golden ratio or Phi works in many aspects of life. It has a basis in mathematics but also in aesthetics in that relies on the eye of the beholder. 1.168 is the magic number (if you want to have a go).

In coming months we will be visiting more of the buildings that intrique, enchant and often amaze  – places worth visiting, viewing and photographing. If you have a favourite, let us know.