Brexit from an Expat Perspective: British Living Abroad Want to Stay in the EU

An InterNations survey among more than 1,800 British expats shows that 72 percent are in favor of remaining in the EU.

A survey conducted by InterNations (www.internations.org), the world’s largest network for expats, shows that almost three-quarters of British expats who say they are eligible and planning to vote in the referendum are in favor of remaining in the European Union. Expats’ most common sources of information are British media publications, with more than nine out of ten respondents consulting them, as well as friends and family: according to 53 percent of the Britons living in another European country, their loved ones provide them with insights about the upcoming election.

Eight in Ten Expats Think Brexit Might Change Their Life
Even though 67 percent of respondents have been living abroad for five years or longer, almost all of them are aware of the vote that is about to take place in their home country: an average of only 0.3 percent of British expats questionned say that they had not heard of the referendum.

As many as 94 percent of British expats think that Brexit concerns them personally and of these, over eight in ten state that Britain leaving the European Union could potentially change their personal living situation abroad. Therefore, it comes as no surprise that close to 60 percent of the Britons living in another European country — according to the latest UN estimates, there are about 1.2 to 1.3 million of them — are planning to vote. Of these, 72 percent want the UK to remain in the EU; a result which is 20 to 30 percentage points higher than the opinion of the broader public, as suggested by pollsters such as YouGov or ICM. Similarly, a mere 19 percent state that they are in favor of the UK leaving the EU, as opposed to 40 to 50 percent of the British population saying the same in official, country-wide polls. Nine percent of respondents were still undecided at the beginning of June 2016, when the InterNations survey was carried out. 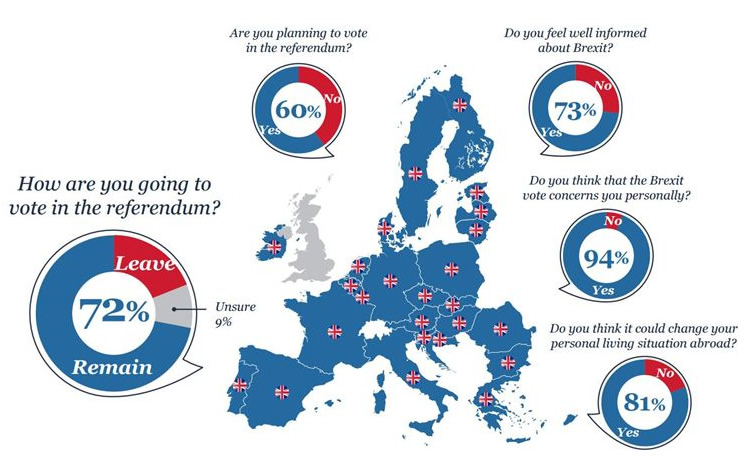 Expats Do Not Feel Well Informed by British Media
Almost three-quarters of British expats living abroad feel well informed about the election, whereas 27 percent disagree with this statement, mainly because they think they are not provided with the necessary information — 57 percent mention this as a reason for their insecurity. Britons living in Sweden seem to suffer the most: there, close to half of the respondents state that they do not feel well informed about the upcoming election.

When asked about their most common sources of information about the referendum, 91 percent of the expats say that they consult British media publications, with 74 percent of them even considering them their primary source. Following on second position are friends and family, with mentions from 53 percent of respondents, followed by English-language media in the expatriates’ current countries of residence (38 percent). Media in the local language of the expats’ new home countries as well as work colleagues seem to be less important sources of information for British expats and were both mentioned by less than one third of the respondents.

Two-Fifths of Expats Not Expected to Vote
More than 40 percent of the expatriates who were questioned in the InterNations survey are not planning to vote. When asked about specific reasons for this decision, the lack of voting rights clearly dominates the picture, with eight out of ten expats who are not planning to vote stating to be in this situation. Survey data shows that this is mainly due to the fact that British expats who have been living abroad for more than 15 years are not eligible: 70 percent of respondents who are not voting are affected by this ruling. British media publications suggest that this is the case for approximately 700,000 people in total.

“I, like many other British citizens living long term in EU countries, have been utterly disenfranchised from a vote that potentially has a greater impact on us than most,” states one of the survey participants. “If we have lived away from the UK, we lose our right to vote — even in the referendum on this very specific point.”

Apart from those who are not allowed to vote, 18 percent of British expats not planning to do so say that they find the matter too complicated to deal with. Another 15 percent state that they do not feel informed enough to make a decision. A lack of interest or influence are each mentioned by 9 percent to be the primary reason for having decided not to take part in the election.

About the 'Brexit from an Expat Perspective' Survey

For its Brexit from an Expat Perspective survey, InterNations asked more than 1,800 British expatriates living in one of the member countries of the European Union to provide insights concerning their information behavior and voting preferences about whether the UK should leave or remain in the European Union (Brexit). The online survey was carried out from 3 to 6 June 2016.

With 2.1 million members in 390 cities around the world, InterNations (http://www.internations.org) is the largest global network and information site for people who live and work abroad. InterNations offers global and local networking both online and face-to-face: At around 4,000 monthly events and activities, expatriates have the opportunity to meet with other global minds. Online services include country and city guides created by a team of professional writers, guest contributions about life abroad, and discussion forums to help members with topics such as local housing and job searching. To ensure the quality of the network, InterNations membership is by approval only.