One of Lagos’s most famous, if unofficial, tourist attractions the “Ferry Cat Refuge” has recently received a complete make-over, writes Patrick Street. The facility supported by The NANDI charity, on the banks of the Rio Bensafrim at the Ferry embarkation point on the Meia Praia side, has been in existence for as long as most people can remember.

Serviced by volunteers from the charity the “Ferry” is home to anywhere up to thirty cats at one time. They are fed daily and are taken for veterinary treatment as needed.

In 2011 alone, the charity paid for the sterilisation and emergency treatment of almost 1500 cats and dogs in the Lagos area, and found homes for many more. 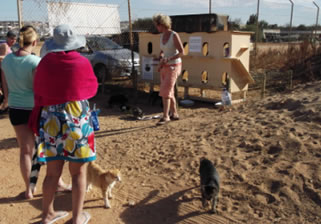 Recently a new kennel has been constructed on the site to house the animals. A spokesperson from the charity told me, “The old kennels were dilapidated and dirty and, consequently, not fit for purpose. It was decided that the site would be cleared and sanitized and a new kennel constructed. The volunteers got together to design, sourced and built the new facility knowing that in the present economic climate the charity’s support for animals will be needed to an even greater extent. In the last month alone nearly a dozen animals have been dumped at the site, and as cats in Lagos come into season many more kittens can be expected later in the year.”

While at the facility visiting with one of the volunteers I was amazed at the positive interest shown in the new facility, particularly by foreigners and Portuguese holiday makers alighting from the ferry. Many, especially those with children, return everyday to interact with the cats, all of whom after a few days in residence are tremendously friendly and like all cats, are well disposed to being spoiled.

The most famous regular visitor, apparently, is a Dutch lady who insists her husband drives to Lagos in their Camper Van every year to see the cats and leave a donation of food, regardless of where they intend to spend their vacation. Seemingly, NANDI has earned an international reputation.

The charity hope that one day the growing number of responsible animal owners will out-number those not so caring in the area, but until then the Ferry Refuge will remain a lifeline for abandoned animals, as well as a vital support for the Municipal Kennels, which is frequently bursting at the seams with guests.

If you feel you would like to donate to the charity, perhaps cat food or goods to be sold in the shop, or if you can spare a few hours a week to become a volunteer, the charity would be pleased to hear from you at:

+1 #1 Helen Taylor 2018-07-21 09:23
While on holiday in Lagos this has been one of my daily things to do, visit the cats. I think you are all doing an amazing job looking after the cats and I hope it spreads across the world. A truly wonderful act of kindness x
Refresh comments list