A Gala Dinner was held at the Conrad Algarve on Wednesday to celebrate the efforts of the students and staff of Escola EB 2/3 Dr Antonio de Sousa Agostinho, Almancil and Escola Dra Laura Ayres Quarteira who participated in the 2019 cookery competition sponsored by Almancil International Rotary Club (AIRC) and the Conrad Algarve Hotel. 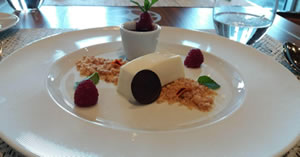 The competition, now in its 6th year and organised by AIRC Community Services Chairman Peter Hinze began in November last year. Two teams of chefs from each school were given a list of ingredients by the Executive Chef of the Conrad, Osvalde Silva who instructed the students to practice preparing their own interpretation of three dishes, a salmon starter, chicken main course and panacotta dessert using those ingredients.

The finals took place on 28th February at the Conrad where the students were given all the ingredients and the use of the Conrad kitchens with minimal guidance from the professional chefs.

The students had to wait until Wednesday to discover which team had won. The dinner was attended by the students, parents and school staff together with Rotarians and guests. Peter Hinze explained that the competition this year had been of the highest standard ever giving the judges a hard time deciding which team should win. In the end it came down to one point and one of the teams from Escola Dra Laura Ayres Quarteira was declared the overall winning team and presented with the Winners’ cup by AIRC President Brian Giles. George Miguel from the Almancil School was presented with a flambé set for his school.

In addition, extra prizes were suggested by the Conrad chefs who were present on the day of the finals. Gustavo Gomes from the Quarteira School was considered by the chefs to be the most promising student with Malina Ioan and Diogo Guerreiro from the Almancil School and Inés Almeida from the Quarteira school being highly commended. Each of them was presented with a Jamie Oliver cookbook and a certificate reflecting their achievements by the Conrad chefs. All the students who participated were given a certificate and a personalised apron in recognition of their efforts.

In honour of the students, the Conrad chefs prepared a meal with their own interpretation of the ingredients for the Gala Dinner.

President Giles thanked everyone who had contributed to making the contest a success with special thanks to the Conrad, Peter Hinze and the schools staff for yet another successful competition and the hope that the event would continue for many more years.

In the photo with the students: