An insight in to GNR life...

At a recent Almancil International Rotary Club meeting, the guest speaker was Corporal Daniel Dias from the Guarda Nacional Republica (GNR) Loulé, who, together with his colleague Sgt Luis Tavares also from the GNR Loulé gave a presentation on policing in Portugal.

The responsibilities of the GNR range from, but are not restricted to, dealing with traffic violations  acts of terrorism, assisting the bombeiros with evacuations when necessary, customs enforcement a bomb disposal unit; horse unit which makes regular checks in the Loulé area, a dog unit, coastal patrols and a ceremonial horse unit.  The GNR has also provided detachments which have participated in international operations in Iraq, East Timor and other countries where there is conflict. In general, the GNR’s purpose is to protect the community. 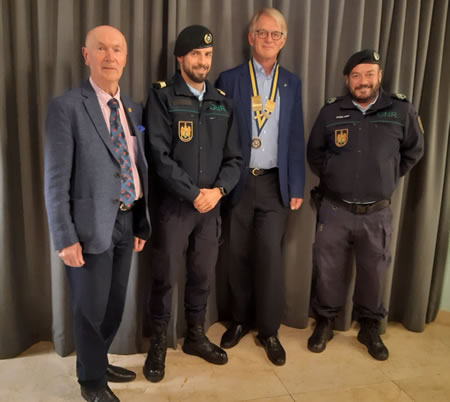 Corporal Dias explained that whilst many people are aware of the GNR through their day-to-day activities (hopefully not through traffic violations) many may not be aware that in addition to the GNR there are four other police organisations in Portugal namely, the Public Security Police (PSP) the Judicial Police, Maritime Police and SEF - Serviço de Estrangeiros e Fronteiras which many of us are involved with when applying for or renewing residency permits.

Corporal Dias’s primary responsibility is to head up the Safe Residency program originally started in 2006 by Rotarian Peter Hinze and GNR Officer Frederico Fragoso allocating each property in the Vale Telheiro and Poço Geraldo areas in Loulé a house number and GPS coordinate to assist the GNR in providing a rapid response in cases of emergencies.  It isn’t only the GNR which adopted the system.  It’s also being used by other emergency and rescue services which now also have a way to find remote locations.  There can be nothing worse than having a heart attack and the ambulance not able to locate the patient.

The scheme grew to other outlying areas in Portugal and has been extended to a Safe Residents and Safe Schools program in the Loulé area organised by Corporal Dias.

Rotary Club President Volker Biebesheimer complimented both officers on a very interesting and enjoyable presentation. “The fact that Portugal is considered one of the safest places in Europe to live is one of the great achievements of the GNR and the other law-enforcement organisations” he said.