In early October, three members from the Algarve Senior Bikers (ASB) made their way up north to Chaves, to meet a group of six Italian fellow riders from the Moto Club Orte (MCO), and accompany them on their way through Portugal.

On the way up north we first drove into Spain from Alentejo and crossed the wide parched plains of western Extremadura Province. From Ciudad Rodrigo, a beautiful medieval town that is famous for its excellent ham, we had a spectacular ride on narrow twisty roads through rugged terrain and steep mountains to the Salto de Saucelle above the Douro river valley that forms the border between Spain and Portugal (see photo). We continued our ride through the panoramic high plateau of the Parque Natural do Douro Internacional with its chestnuts, walnuts and olive groves, on to Bragança, the capital of Trás-os-Montes. From Bragança a twisty road (N103), that is perfect for experienced motor bikers, leads to Vinhais and Chaves along the Parque Natural de Montesinho.

PHOTO RIGHT: The upper Douro valley at the Salto de Saucelle looking from the Spanish to the Portuguese side.  By Walter Kollert

Chaves is the starting point of the national road 2 (EN2/N2), nicknamed the Route 66 of Portugal. N2 takes you from Chaves in the North through the center of Portugal to Faro in the South covering a distance of 738 km. It was 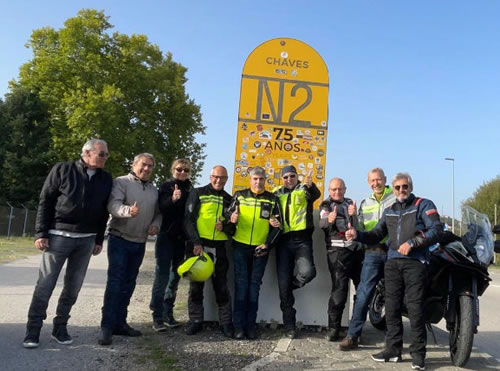 completed in the 1950´s, and is the longest continuous road in the country crossing 4 mountain ranges, 11 rivers, 29 municipalities, and passing 4 UNESCO World Heritage sites.

Meeting our fellow riders from the Moto Club Orte (MCO) in Chaves was a joyful event. They had started out from Italy for a longer tour through the Iberian Peninsula covering in total 4500 km.

We set out together to hit the N2 that winds from Chaves into the mountains before heading into Vila Real and Peso da Régua, from where we made a short detour on the N222 to Pinhão to marvel at the spectacular vineyards on the steep slopes of the Douro river valley.

PHOTO LEFT : The group of riders from the Moto Club Orte (MCO) and the Algarve Senior Bikers (ASB) at the start of the N2 in Chaves: António, Éric, Anne, Saro, Peppe, Alberto, Sergio, Walter and Paolo (left to right). By Paolo Brescia 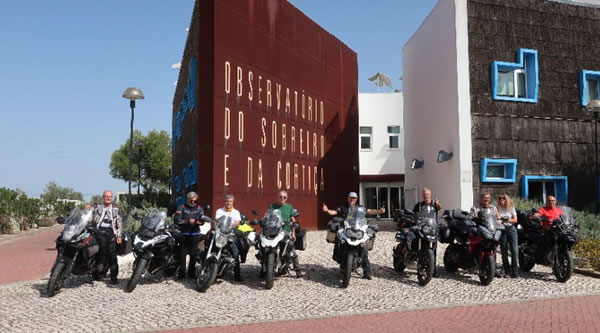 Following the course of the N2 to the south we entered the area of the Dão river, another well-known wine region south of Viseu. From Viseu down to Vila Nova de Poiares it turned out to be rather difficult to stay with the N2, as this old road had been overbuilt several times by modern motorways.

We left the N2 after passing the Lake of Montargil, which showed an appalling low water level, and turned towards Coruche, where the very knowledgeable Dr. Carlos from the Cork Oak Observatory gave us a guided tour through the museum exhibits.

PHOTO RIGHT: The group of riders in front of the excellent Cork Oak Observatory near Coruche. By Walter Kollert 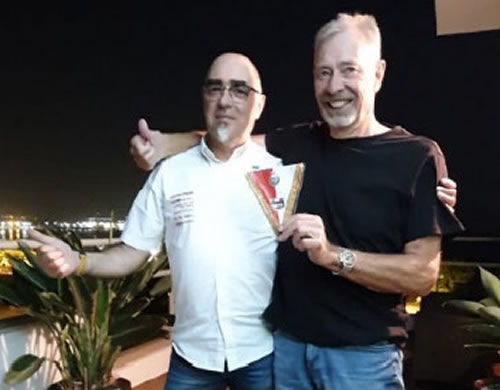 After a well-deserved rest in Setúbal the group crossed the Sado estuary by ferry boat, and went deep into southern Alentejo on the small twisty N120.

That led us through open Montado forests and cattle pastures to Sagres, where we concluded the tour with a spectacular sunset at the Cabo de São Vicente, the southwestern most point of Portugal and mainland Europe.

Finally, as a token of appreciation, the Algarve Senior Bikers (ASB) and the Moto Club Orte (www.motocluborte.org) made an agreement to support each other´s efforts in promoting motor bike trips in Portugal and Italy, and to mutually help its members in organizing and implementing them.