The Tiny Shelter is asking for Micro-donations!

Animal rescue centre, TheTiny Shelter in Albufeira got it’s name because of the size of the shelter. Initially dogs were rescued and looked after close to an old ruin in central Albufeira. However, when the land was sold, a kind benefactor allowed Isabel Searle the use of her land, and a small shelter was built in a few weeks.

Isabel and her army of animal advocates rescue animals from all over the Algarve, but primarily Albufeira and surroundings. Most of them are in a desperate state, from neglect, abuse, starvation, leishmaniases, mange, tick fever, heartworm - and the multitude of other illnesses that stray dogs are susceptible to.

Once rescued they are immediately treated and when sufficiently recovered, moved to the shelter to recuperate. In the shelter we have a huge group of local and foreign volunteers who run the shelter on a purely volunteer basis, helping to look after, exercise, train, and care for all the dogs at the shelter. They also go to huge efforts to rehome dogs, both in Portugal and abroad.

The Tiny Shelter is not an official charity (yet), but a group of animal protectors and activists that does what we can to save and home every animal possible - to give them the best possible chance of a life with a family.
The shelter as it stands now is a collaboration amongst nationals from around Europe, with the shelter being on private land.

They now have more than 2000 fans on their Facebook page, which is fantastic, - but this sparked an idea - if every one of their Facebook fans donated only 1 Euro per month, the Tiny Shelter would be able to help more dogs and pay our food and vet bills during these difficult times. So, The Tiny Shelter have created a 'teaming' group for micro donations of 1 Euro! Less than a burger!

Become part of the Tiny Shelter family by registering HERE to donate €1 per month, and help them to help the dogs. Maybe even invite your friends and family to join us as well. Thank you so much!

And if you aren’t able to help by donating - please consider fostering one of the dogs, especially during this Covid-19 crisis 🐶🐾‼️

Via paypal to: albufeira.tinyshelter@gmail.com
Via bank transfer to:  IBAN BE84 9670 2358 0359
Make a micro donation at: https://www.teaming.net/tinyshelteralbufeira-portugal 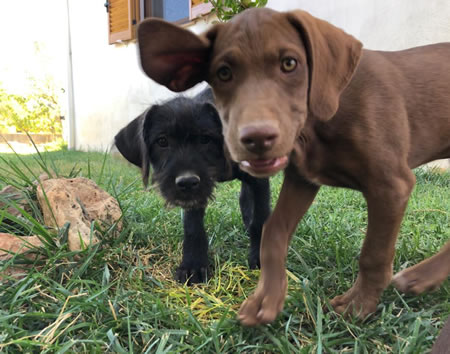 The Tiny Shelter currently have dogs of all ages for adoption and fostering.
These two chaps are just a couple of the dogs who have been fostered by one of The Tiny Shelter team, along with their mummy, but are now looking for their forever homes.

Guinness (black) is lively 'drama queen', with a little monster streak! He has his own mind and makes it very clear what he wants and what he doesn't. He is very cuddly, then he is heading for the next adventure - or jumping on his mummy or starting a little play fight with his brothers.
As sweet as he is, whoever adopts this little chap will need patience to train him.

Wookie (brown) is already quite 'obedient'. He also loves to play and jump (he can jump really high!) and run around, but he is often happy to do this all alone, just coming for a short play with his brothers then going his own way. He was the first one of the litter who learnt to sit for a biscuit! He is ok with cuddles but doesn't love them as much as Guinness does - his favourite thing is to play with you, especially fetching the ball.

If you can offer one, or both, of these little chaps a loving, stable home, please contact The TIny Shelter via Facebook, or via the contact form at the bottom of their website Home page.