An oasis in the ecological desert

A bit more than a decade ago, Rita Margalhães and Sérgio Correira started cultivating a plot of land close to Alvalade in Alentejo. In the beginning, they didn’t know anything about farming. Today, they are feeding eleven families in the area every week. “About eighty percent of the food we eat comes from the garden”, says Rita, as she is making lunch for the volunteers.

She is an environmental engineer who decided to abandon her academic career and become a farmer. When her partner Sérgio’s father bought the land in 2006, there was nothing on the three and a half hectares except for some olive trees.

Building trust and cutting the middle man
This year, excitement revolves around starting an AMAP, also known as CSA, or Community-Supported Agriculture. The AMAP/CSA model means that consumers become members of the farm, signing up for a part of the weekly harvest. This ensures that the farmer gets a guaranteed income from the members, and the members will have a guaranteed share of the harvest. Basically, it’s about sharing the responsibilities and risks as well as the benefits. It is also a way to get rid of long distribution chains and middle men, like supermarkets. 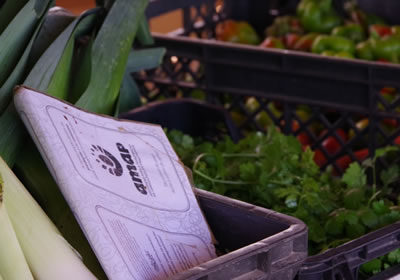 “It’s about building trust”, says Rita about AMAP. “We have people on a waiting list, but right now we want to make sure that the members we already have are getting enough. And just like the members need to be able to trust us to deliver, we need to be able to trust them to show up and pay. We don’t want to be ‘the big AMAP’ of the area”, she adds, “and we are hoping that more will be popping up soon”. There are currently only nine registered AMAPs
in Portugal.

For the farmer, the AMAP model makes a big difference.

“It gives us farmers a much greater security than selling in the market, where you never know how much you will sell”, says Sérgio. “With AMAP, you don’t need to look for customers, all your produce is already sold.”

“And the member pay their fee regardless of what the harvest is”, Rita adds. “Sometimes there will be an abundance, like during the summer months when there is a lot of tomatoes. Then they need to know how to preserve food, because in other times of the year there will be a scarcity, just like in nature. Preserve when there is a lot to eat when there is little. It’s a different way of doing things. In the global food system it’s common that there is more food
than people can buy and it simply gets thrown away.”

Surrounded by an ocean of intensive farming
It’s the time of picking olives and in one day Rita, Sérgio, four woofers, a friend of Sérgio’s father and the youngest daughter Lia, who admittedly contributes with entertainment more than anything, have collected ten sacks as the sun sets behind the trees on the farm.

The farm, called Monte Mimo, is surrounded by vast fields of industrial agriculture. The majority is genetically modified corn for animals, tomatoes and “super-intensive” olives. The olives are planted very close to each other, “more like a vegetable than a tree”, Sérgio comments, and are watered much more often than ordinary olives. Entering Monte Mimo, with its many different kinds of trees and sections, feels like swimming ashore to an island of diversity in an ocean of monocultures.

Large-scale agriculture in Alentejo is however, not news. The region is historically known as the “bread basket” of Portugal and has been relying on agriculture, livestock and forestry for centuries. Since entering the EU in the eighties, the landscape has also been heavily shaped by CAP, union’s Common Agricultural Policy, that favors large farms and basically put a pin in the traditional subsistence style of farming. “This whole area used to be covered in forest”
says Rita. “There is a chronicle of some king that had a property close to Colos, and it says that on his way here from Lisbon, the sun didn’t touch his skin even once because of all the trees. And now look,” says Rita and makes a gesture towards the window and the vast plowed fields beyond Monte Mimo. “It’s madness.”

Planting with a plan
When the couple first came, there were only some olive trees on the land. They started growing some things for themselves, built a house and organized access to water. They eventually began growing and selling products from tomatoes, peppers and eggplants. But after a while they felt something was wrong.

“We were basically only planting vegetables from the solanum family and it just didn’t feel balanced. We weren’t giving anything back to the soil. So we decided to diversify”, says Rita. They planted a small agroforest, with trees and plants that would help fertilize the garden with biomass, feed humans and improve the structure of the soil. Walnut, medronho, poplar and much more was planted to support the productive system of the garden. “Like the
comfrey for example,” says Rita and points at a plant with thick, vital leaves. “it opens the soil up with its roots and prevents compaction.” 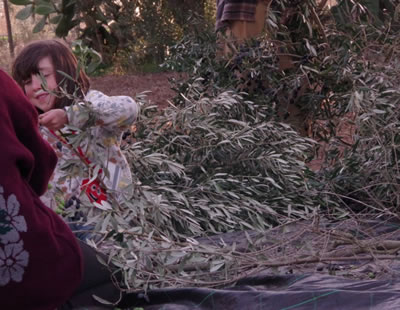 They even planted eucalyptus, a tree that has become persona non grata in alternative forestry. But Rita insists that the tree itself is not bad. “The eucalyptus is a very generous tree”, she says. “It creates a lot of biomass and cover material for the garden. We are looking at how it can function within our ecosystem.” Another less known use of the eucalyptus leaves is putting them together with crops that you want to store, since the highly aromatic leaves are a natural bug repellant.

A different life
For Monte Mimo, there are both pros and cons living close to industrial agriculture. On the upside, neighbors sometimes lend them machinery that they have bought thanks to the subsidies they receive as big farms. Another neighbor brings lemons when there is an abundance. On the downside, they are feeling the negative impacts of large-scale agriculture as well. “Our water has been polluted by the pesticides and fertilizers of the surrounding farms”, says Rita, “so we have to bring our drinking water from outside.” And seeing as there are almost no other trees around, Monte Mimo has become something of a refuge for birds.
“We have many birds here” says Rita with a smile that turns into a frown, “but they take a lot of the fruit as well.”

Rita was working at the university of Porto when she had a realization that would change herlife forever. There were big civil protests against a company that was doing test fields of genetically modified agriculture in the north. “As a researcher of the university I went around talking to local people in order to understand the situation better”, says Rita. “I was shaking hands with an old farmer and just as we were letting go, he looked down at my hand and said: ‘You are not a farmer, what do you know about growing food? Maybe you should try it yourself so you’ll know what it is about’. And I knew he was right.”

By then, Rita and Sérgio had met while picking apples in France. In 2006, Sérgio’s father bought the land close to Alvalade and the couple decided to move there together. They continued picking apples for a few months every year to have an extra income. Today, the couple and their two daughters live off what they produce on the farm, as well as a modest income from Sérgio’s part-time job as a groundkeeper in the community Tamera. “We are not making a lot of money, but on the other hand I haven’t bought tomato pulp in ten years”, Rita says.

What about retirement?
“It is definitely something I am thinking about”, says Rita, “but I haven’t got any answers. I am hoping that by then, we will have a stronger community around us. But the way things are right now, I am not sure our generation will be able to retire anyway, so I’d rather live like this and do something different, a kind of land reform”. Then she starts laughing at what she just said. The post-revolution land reform doesn’t bring associations of success to mind.

Planting trees
While harvesting olives, Sérgio reflects on the question he just got. What is his advice to someone wanting to do what they have done? That is, starting from nothing and create a place to live, a garden for food as well as a source of income. “Well, I guess I would say to try and understand what you have, and what you want to do with it.” He turns quiet for while and then changes the subject. “People will go to march against climate change, but on their way home they will pass in the Pingo Doce to buy food. There is something wrong with that”. Then, with an olive branch in his hand, he suddenly has an insight. “Oh, the first thing to do is definitely to plant trees. And to have some kind of thought behind it. And don’t forget that you will want to have some open spaces in between the trees.”