New advances in ‘marine-based’ biotechnology involving algae, crabs and prawns could help tackle the global plastic crisis, according to a major EU study.

A detailed report released today by a consortium of leading European scientists shows that biodegradable biopolymers created from the sea have the potential to compete with traditional plastics - while crucially offering a more environmentally friendly alternative.

The study on ‘Marine Industrial Biotechnology’ is part of the €1million KETmaritime project, funded by the Interreg Atlantic Area Program, via the European Regional Development Fund.

“We are witnessing a major global movement as countries around the world are looking to prohibit or limit the use of conventional plastics,” she said. “There is growing pressure to find more sustainable and environmentally friendly alternatives. Recent advances in the production of biopolymers from marine sources such as algae, crabs, shrimp and prawn waste are proving hugely successful. A key attraction is the ‘biodegradability’ factor which could help reduce the problem of marine litter - considered by the European Commission as one of the largest current threats to the environment.

“Our latest study highlights a number of companies who are already putting the technology into practice including Netherlands firm Studio Klarenbeek & Dros working alongside Atelier Luma in France to develop algae-based biopolymers to compete with traditional plastics. The material can be applied on an industrial scale and processed like traditional plastic. It has proven to be suitable for injection moulding with 3D printing processes. Meanwhile, in Italy, Algamoil and Teregroup are also working on the development of 100pc biodegradable plastic made with algae in the form of filaments.” 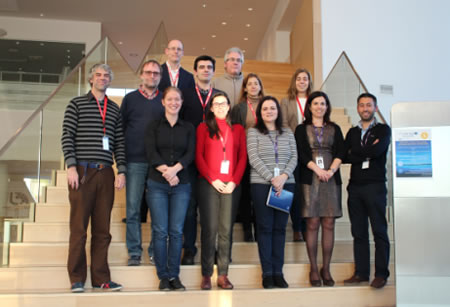 The most important bio-based biodegradable biopolymers are PHAs (Polyhydroxyalkanoates) and PLAs (Polylactic acid). PHA polymers are thermoplastic and can be transformed by means of injection-moulding to produce films and sheet, fibres, laminates, nonwoven fabrics and adhesives. PLA is also a thermoplastic polymer that can replace traditional polymers such as PET, PS, and PC for packaging applications.

The latest KETmaritime study was led by Spanish technology centre IDONIAL in collaboration with Marine South East in the UK and the INL in Portugal.

David Santos from IDONIAL said other naturally occurring biopolymers present in marine biomasses include ‘chitin’ and ‘chitosan’. Both can be produced through a chemical extraction processes involving crabs, shrimp, and prawn wastes.

“The exploitation of fish and shellfish biowastes to produce chitin and chitosan presents a large business opportunity for the EU market,” he said. “The global chitin market is expected to reach $2900m by 2027. The healthcare segment is projected to grow at the highest rate, with waste and water treatment applications offering significant growth opportunities.

“Chitin films have also proven to be very effective in food preservation. They can be used as active packaging material for the quality preservation of a variety of food, or as antimicrobial films to provide edible protective coatings. Researchers at the Georgia Institute of Technology have recently developed a material from cellulose nanocrystals and chitin nanofibers. The resulting material shows up to a 67pc reduction in oxygen permeability compared to some forms of polyethylene (PET), which is one of the most common plastics employed in food packaging, improving food preservation.

“While the bio-based plastics sector is developing rapidly it remains expensive in comparison to conventional fossil plastics. The price is mainly driven by the cost of feedstocks and processing steps. In order to harness its true commercial potential experts in this area will be working hard over the coming years to reduce production costs right along the value chain.”

The KETmaritime project is being delivered by a consortium of seven partners across Europe in an effort to identify ‘Key Enabling Technologies’ to support the future needs and demands of the Atlantic maritime industry. It involves five detailed reports.

For more information on the KETmaritime project visit the website www.ketmaritime.eu, phone +351 253 140 112 or email Ana Vila on Ana.Vila@inl.int

KETmaritime is a €1million project that aims to transfer Key Enabling Technologies (KETs) to the Maritime Industries of the Atlantic Area. Focused on building a cooperative network that stimulates innovation and competitiveness, the project embraces the challenge of increasing the capabilities, skills and knowledge on KETs in an integrated and cross-national approach. The consortium brings together seven partners from five countries that, under the framework of the project, work closely with industries and businesses. The ultimate goal is to bring to market new processes, products and services. Partners in the consortium include French multidisciplinary research laboratory CIMAP (CEA group), Portuguese maritime economy cluster Fórum Oceano and Spanish industrial design centre IDONIAL. Ireland’s national centre for marine and renewable energy MaREI and UK marine cluster organisation Marine South East are delivering further support, alongside Spanish non-profit research association AIMEN. KETmaritime is a project funded by the Interreg Atlantic Area Program, supported by the European Regional Development Fund.