Pego do Inferno 'not worth visiting'

The repair of the Pego do Inferno waterfall and pool in the countryside near Tavira has not happened, despite talk, more talk and years of promises to restore this much loved tourist destination.

A new video on YouTube concludes that 'the site is not worth viisiting, holidaymakers would be better off heading to a beach.'

Such has been the sloth of the authorities which claim to have tourism as a priority, until they have to spend any money, that a petition has been set up stop the site falling into to further disrepair.

The destruction of the area around the pool in the 2012 fires was extensive yet nothing has been done to restore one of the most charming tourist attractions in the Tavira area. 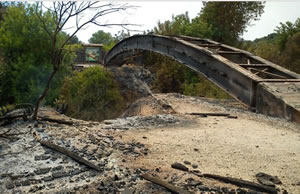 The Pego do Inferno is a waterfall that often plunges into a deep pool and is a much loved cool alternative to the crowded summer beaches. Currently the trickle of water and choked pool lies testamant to Tavira council that is not interested in fixing the access to the site which used to draw thousands of summer visitors.

The access paths were blocked off by the council in 2002 but dedicated bathers and walkers naturally have ignored these and have found alternative ways to get to the oasis, to be met with a scene of dereliction and lack of care.

A newsletter from the Tavira Science Center has launched a public petition available for 30 days to collect signatures of those who agree that the attraction should be restored to its former glory.

Other bodies now concerned at the continuing lack of action are Tavira council itself and the Geography and Regional Planning department of the New University of Lisbon.

These bodies, under a European project, are starting initiatives to 'gauge usage of the site' and want to draft a ‘charter of principles’ for the use of space.

Such a charter will stress the need to seek funding sources "that are not just public funds, but that also involve synergies among organisations and citizens concerned about the current state of Pego do Inferno and the surrounding area, for example by getting money from crowdfunding."

These worthy organisations say that the site is important for the enjoyment of future generations "as a recreational area and for environmental and cultural education," and that the degradation of the area surrounding Pego do Inferno "must be halted immediately, and interventions made to the access routes to the site.

Pego do Inferno should be defined, "according to its load capacity, limiting and regulating uses and functions (such as camping and beach use) calling into question the value of the site and the safety of users."

Also that "a model of recovery and management involving not only the Municipality of Tavira, but also citizens that are concerned about the preservation of the Pego do Inferno," should be found and that a management model that respects local characteristics is developed.

The local municipality "should intervene in order to ensure greater speed in solving currently existing conflicts of interest and mediating those interested in developing the area surrounding Pego do Inferno."

There we have it, more worthy management waffle while the damaged tourist site lies in a state of neglect because those in charge have done nothing except block off the access routes and talk about 'solutions' while doing as little as possible, hiding behind the catch-all phrase 'no money.'

Tavira council now has allied itself to those wishing to solve the problems that in part it has created.

Following the mantra that ‘someone else always pays’ the petition and unnecessary ‘charter’ looks for public support and funds from ‘other organisations’ when the council could have sorted out this area years ago to the benefit of visitors and locals alike.

The fact that the council has done nothing, and now wants someone else to do all the work, says a great deal for local council management and priorities.

The conclusion that Tavira council clearly is not interested in tourism is hard to avoid.