It’s the first time in the history of the prestigious Portuguese guide Boa Cama Boa Mesa that a single resort takes away all three awards in a year: Platinum Key, Platinum Fork and Chef of the Year, the top prizes awarded by the Expresso national newspaper group. 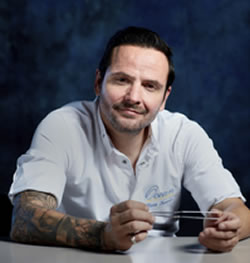 For Hans Neuner, “this award is the recognition of many years of hard work, with an amazing team, which has been key in helping me learn about the exceptional products of this unique region, to be able to present them in an uncomplicated form to our clients.  When the product is of great quality and is used with the respect it deserves, it doesn’t need much to shine”.

In the words of Kurt Gillig, Managing Director at VILA VITA Parc, “the awards for best resort and best restaurant confirm our vision to show the world our Portuguese identity, and especially our passion for the Algarve, with the best it has to offer: the hospitality, gastronomy and quality of its products. These are the true values of this region that we offer on a daily basis to our guests, with a smile!”

The award ceremony took place yesterday, on April 8, at the headquarters of the Impresa group in Lisbon, and as usual it was presided by Pinto Balsemão, chairman of the Grupo Impresa, owner of the Expresso newspaper, who handed personally the prizes. The awards distinguished 61 of the best hotels and restaurants in Portugal, amongst hundreds of other excellence establishments in the country.

Austrian-born Hans worked at leading hotels such as the Carlton in St. Moritz and the Dorchester in London, together with Restaurant Tristan in Mallorca, before joining the Hotel Adlon in Berlin and then the Süllberg in Hamburg. With the aim of achieving recognition in his own right, Hans came to VILA VITA Parc in Portugal as Ocean’s Executive Chef in 2007, setting the restaurant on the path to Michelin success. Ocean won its first Michelin star in November 2009, followed in November 2011 by its second star, which made it one of only two restaurants in Portugal to hold the honour of two Michelin stars, at the time.

Hans prides himself on a contemporary, fresh and individual cuisine, with a local signature, focusing on fresh fish and seafood from the Atlantic Ocean, fruit, vegetables, meat and wines from the heart of Portugal, as well as the wines and organic products from Herdade dos Grous, the resort’s sister property, only an hour away, in the Alentejo. 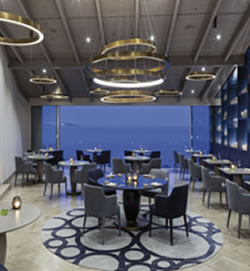 Created eleven years ago under Kurt Gillig’s (VILA VITA Parc’s Managing Director) strategic vision, who has successfully managed to put the Algarve on the international gastronomic map during the past years, Ocean offers spectacular Atlantic views and the perfect combination of sublime food, seamless service and an atmosphere of casual elegance.  After a dramatic transformation, Ocean re-opened its doors in the Spring of 2016. The restaurant’s stylish renovation reflects the artistry of Chef Neuner’s food, and enhances the singular dining adventure offered. Hanging crystals from Murano line the hall, guiding diners into the restaurant, and the natural palette of colours used in the interior design, evoke the deep blue of the sea, the sky and the golden sands of the Algarve itself. Crafted wooden floors and silk carpets, custom-designed tables, chairs and banquettes and large bronze circular ceiling lamps and a feature wall of precious African corals complete the strikingly contemporary update.

Alongside the à la carte selection, are Chef Neuner’s characteristically creative amuse-bouches and acclaimed seasonal tasting menus, which highlight superlative Portuguese and Iberian dishes crafted with modern techniques. In each dish, much more than “simple food”, is the result of a thorough research and experimentation executed by a dedicated and curious team and of the direct and daily contact with small local producers, with the people, their memories, and emotional and historical references.

A sample of Ocean’s current menu can be downloaded here.

VILA VITA Parc is a five-star luxury hotel and resort with a breath-taking cliff-top location in the centre of the Algarve, Portugal’s most southerly and sunniest region, and one of Europe’s most popular destinations for leisure, golf and business travel.  A member of The Leading Hotels of the World, VILA VITA Parc has 170 rooms, suites and villas, a 2-Michelin star restaurant, a further 10 restaurants and 6 bars, a Sisley spa, a private yacht, and a wide range of sports and leisure facilities.

Between 5 and 13 May 2019, the resort will welcome back the 4th edition of the VILA VITA Fine Wines & Food Fair, featuring a spectacular constellation of Michelin starred chefs, award-winning winemakers and gourmet producers all under one roof for 9 days of delectable gastronomy.