On April 21st, members of the Rotary Club Estoi Palace International paid a visit to the salt pans in Tavira run by Rui Simeão.

Located in the Ria Formosa Natural Park these saltpans have been in his family for over 150 years.

We were met by our guide Marianna who explained to us how the water enters the pans from the Atlantic Ocean at high tide and how it is filtered to produce top quality Flor do Sal (Flower of Salt).

The business produces 1000 tons of salt per year of which 40 tons is Flor do Sal. Flor do Sal is hand-harvested by workers who scrape on the top layer of salt before it sinks to the bottom of the salt pans. As it dries, it forms small sheets that easily crumble between the fingers. Flor do Sal is considered an artisanal food product. Due to its labor-intensive production it is one of the most expensive salts.

Despite some outlets offering different grades of Flor do Sal, Marianna explained that this is not true, as it cannot be graded in that way. The Rui Simeão Tavira Sal Company exports worldwide to places like Canada and Malaysia and has received numerous awards for their Flor do Sal.

The work is labour intensive during the summer months when the salt is ready to be harvested, and the company employs between 20 and 40 people, whereas in the winter there are just 5 people employed. We had a stroll around the salt pans, which are currently being cleaned out after the winter months, in preparation for the salt production during the coming summer season.

The most notable differences between sea salt and table salt are in their taste, texture and, of course, processing. 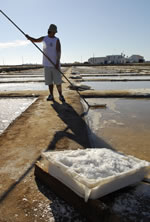 Sea salt is produced through evaporation of ocean water, or water from saltwater lakes, usually with little processing. Depending on the water source, this leaves behind certain trace minerals and elements. The minerals add flavor and color to sea salt, which also comes in a variety of coarseness levels.

We followed this informative visit with lunch at a local restaurant, enjoying their specialties of monkfish rice and piri piri chicken.