November 11th - Peter Booker looks at 'the Armistice in Portugal'

The legitimate republican government of Portugal had been overturned in December 1917 by a Germanophile major, Sidónio Pais. He presided over a dictatorial regime, and enjoyed a surge of popularity as he promised unachievable improvements to the economic life of the Portuguese.

Always uniformed, and with a greater retinue than enjoyed by any of Portugal´s recent monarchs, he gave the appearance of authority and certainty. Elected President of the Republic (he was the sole candidate) in May, 1918, he was however unable to satisfy the country´s desire for political and economic stability, and in particular he was unable to force down inflation.

Sidónio Pais, during his year of power, had done much to undermine the morale of the Portuguese forces in France. He brought back to Portugal officers who were not then allowed to rejoin their units at the front; he refused any kind of reinforcement from Portugal to the two front line divisions; and he would not allow the troops in Flanders any home leave. 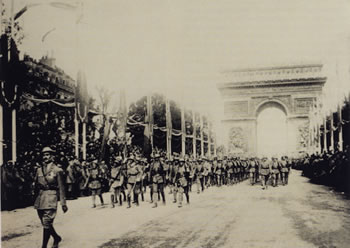 Decisively humiliated at the Battle of La Lys on 9 April 1918, the CEP (Corpo Expedicionário Português) had lost its morale and will to fight. On that dreadful day, the CEP lost 7 500 officers and men, killed, wounded or taken prisoner.

During the remaining eight months of the War, Portuguese troops became unmanageable, and some even turned their guns on their own officers. The Armistice of 11 November, 1918 could not come too early for the Portuguese forces in Flanders.

Mirabile dictu, Portugal was on the side of the victorious allies, and Portuguese troops took part in the Victory Marches in Paris and London, as well as that in Lisbon, over which President Sidónio himself presided.

But Sidónio´s style of autocratic government had lost support, and the return of the victorious troops did not increase the narrow base of support among the military which he enjoyed.

Less than one month after the Armistice, on 5 December, 1918 a young democrat fired a revolver at Sidónio as he arrived at Rossio Station in Lisbon. He escaped unharmed. 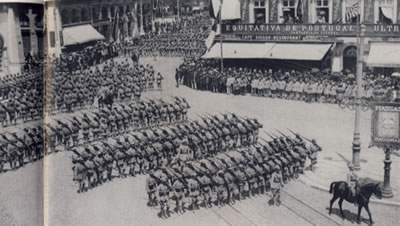 Exactly a week later, and in the same place, an ex-sergeant used his military training to better effect, and fired two fatal shots at the President, to whom Fernando Pessoa had referred as presidente-rei. There is no other way to get rid of a dictator, and Portugal´s latest attempt at dictatorship had failed after less than twelve months.

Portugal´s main war aim was to safeguard her colonies, and in this she was successful. She even managed to regain the Kionga Triangle, (Triângulo de Quionga), a speck of territory in Northern Mozambique, which had been occupied by German troops for nearly 25 years. And Portuguese officers and men returned home triumphant, their chests bespangled with medals. 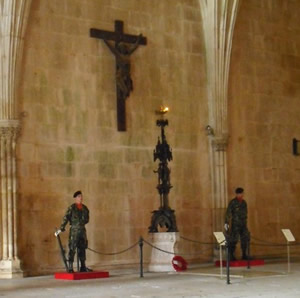 Monuments to the Unknown Soldier became fashionable after Britain had buried an unknown soldier in Westminster Abbey in 1920. Other countries quickly followed suit, and Portugal´s Soldados Desconhecidos (one from France and one from Africa) were interred in the Chapter House at Santa Maria da Vitória at Batalha in 1921. The Monument to the Unknown Soldier, in Lamego, was inaugurated much later in 1932.

Thank you Peter. More thanks to all who died, or were wounded, and the bereaved, in defence of freedom from tyranny.
Refresh comments list