Since the 1300s, there had always been English merchants living in Portugal, and many of them lived in Lisbon, while there were also significant communities at other times in Porto, for example, and in Faro.  The community based in Lisbon was called a Factory, meaning not a manufacturing plant but a trading association.

Before the Reformation in England, English people in Portugal were considered to be co-religionists of the Roman Catholics of the country.  After Henry VIII´s Reformation, English people were regarded as heretics, and for the next 160 years English people in Portugal had enormous religious problems.  The Inquisition (founded in in Portugal in 1536) objected to Anglican services, baptisms and burials.  For some years therefore, Lisbon English buried their dead either in the sand below the high-water mark, or at sea, or secretly on the southern shore of the Tagus. They were permitted to hold their services only in the Envoy´s (Ambassador´s) house and nowhere else.  There are instances where the British consul was reprimanded by the Inquisition for permitting services to be held when there was no Envoy in residence. 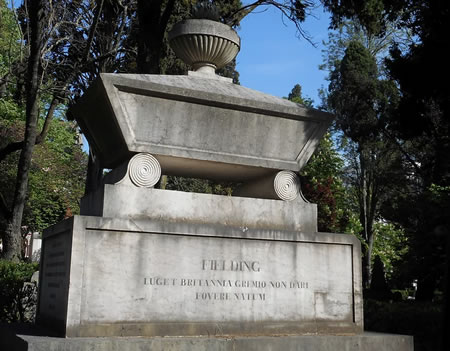 The Treaty of 1642 between the restored D João IV and King Charles I permitted English Protestants the right to practise their religion in their own houses or ships.  That Treaty was reinforced by another between D João and the English Republic in 1654.  This second Treaty declared that English subjects living in Portugal should also have a plot of land allotted to them which would be fit for the burial of their dead.  The relevant Article in this Treaty was clearly one which was important to the English members of the Factory in Lisbon, but although the King had agreed to this particular arrangement, he was unable to overcome the resolute resistance of the Inquisition.  Not even the marriage of D Catarina de Bragança with King Charles II made any difference.

It was not until the early 1700s that any change could be made, when in 1717 the English Consul Poyntz managed to arrange a permanent lease on a suitable plot for a graveyard. The Dutch Factory managed soon afterwards to lease an adjacent plot from the same landlord, and the two Protestant Factories combined to acquire more land for the same purpose in the five years 1729 - 1734.  The change of attitude of the Portuguese authorities could have been linked to the increasing economic importance of the English (or by now British) Factory.  The leased plots were well outside the built up area of the city, and located next to the orchards belonging to the Benedictine monastery which would later be the site of São Bento, the National Assembly.  The leased plots had formed part of the Quinta belonging to Gonçalo de Almeida e Sá. The English part used to be known as O Cimitério dos Ingleses, but it is now the British Cemetery.

The Great Earthquake of 1755 devastated much of Lisbon and the neighbouring Benedictine monastery was ruined, but the cemetery itself was almost untouched by the disaster.

A dispute arose in 1779 between those British responsible for the British part of the cemetery and Daniel Gildemeester, the Netherlands consul.  He wanted to erect a large monument over the tomb of his son Jan Gildemeester in the British part of the cemetery, just where the British representatives wanted to open a new separate entrance.  This dispute was eventually resolved by the British consul, who advised his fellow-countrymen to back down, and in return the Dutch financed half the cost of the mortuary chapel, as shown by the inscription over the door Surrexit impensis Britannorum et Batavorum MDCCXCIV [Erected at the cost of the British and Dutch 1794]  Gildemeester´s monument remains in situ to this day.

During the Peninsular War in 1810, there was a British army in and around Lisbon.  It was sheltering behind the Lines of Torres Vedras from the invading French army of Marshal Soult.  Inevitably, there were deaths among the British formations and the army looked towards the British Cemetery for burial plots.  The original cemetery was far too small for this new purpose, and so the Factory acquired a larger piece of contiguous ground.  The responsibility for the whole area gradually passed into British hands, and although the boundary line between the original cemetery and the military portion is still there, eventually the difference between the two areas faded into insignificance.

Soon after the end of the Peninsular War in 1814, the owner of the Legation House indicated that he wished to repossess his leased property.  It was in this house that Anglican services had been regularly held under the terms of the Treaty of 1654.  The British community eventually decided to build a Chapel in the centre of the military section of the British Cemetery, and the Chapel of St George the Martyr was dedicated in 1822.  Through its life, this jerry-built chapel required more and more repairs and in 1859, another earthquake rendered the building unsafe. After yet more repairs, the whole building was destroyed by fire in 1886.  The then chaplain, Canon Thomas Pope, energetically raised £1000 towards a new building, which was completed and consecrated within three years, and that replacement chapel is still in use today.

Strangely, the Second Boer War (1899 - 1902) is also commemorated in this cemetery.  During that war, some citizens of the two republics (Orange Free State and Transvaal) escaped the hostilities by fleeing into Moçambique where they were interned by the Portuguese authorities.  Many of them were then brought to Portugal and most were held at Peniche, Caldas da Rainha and Alcobaça.  Of the roughly 900 interned Boers, thirteen died while in Portugal, and in 1913 a monument was erected in the cemetery to their remembrance.  This monument was fashioned out of red Portuguese marble, and stands still on its original site.  At its inauguration, the British representative in Lisbon said that those internees who had died had suffered the loneliness and boredom of exile until the bitter end, and were buried far from their familiar homes in a friendly but foreign country. 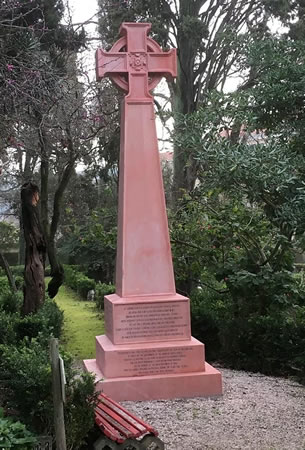 During the Second World War, some British and allied servicemen lost their lives on Portuguese soil. Some were naval personnel and others airmen.  There are thirty-one graves in the British Cemetery modelled on the design common to those graveyards under the control of the Commonwealth War Graves Commission.

The boundaries of the cemetery remained unchanged until the 1940s.  At that time, under the powerful and electrifying leadership of Duarte Pacheco, the Minister for Public Works, the Câmara of Lisbon was modernising the city and its street plan.  One of the major changes introduced by Pacheco was the building of the coastal Marginal road between Alcântara and Cascais.  The Câmara also planned to build a new road between the British Cemetery and the Estrela Gardens, and in order to achieve its aim, it was necessary to use a part of the grounds of the existing cemetery, about 770m2 in area out of a total cemetery area of over 20 000m2. They would need to rebuild the boundary wall and some 35 graves would need to be moved to a new position.  Some trustees from among the British community unwisely chose to object to these plans, not recognising that Minister Pacheco was determined to have his way.  Eventually an agreement was reached in 1950, some ten years after the first proposal had been made.  The alteration to the cemetery followed Pacheco´s plan and was a major event in its history, and the money realised in the expropriation of the small plots of land were used to extend the cemetery to the north.

The new road to the south of the cemetery was named Rua São Jorge, and the reconstructed main entrance now gives onto that road.  The old carving of the British Royal Arms which graced the original entrance is now positioned over the new main gateway.

The entire cemetery was originally surrounded by trees, in particular cypresses.  It is reputed that the Inquisition had insisted on the trees in order to hide the graves of the heretics from the eyes of the faithful.  Many of the original trees were uprooted during the devastating cyclone of 15 February 1941 which ravaged mainland Portugal, and were then replaced.

The earliest extant gravestone is for Francis La Roche, a Huguenot who died on 5th February 1724.  There are graves of people who are important in the history of Portugal.  For example, William Stephens who died in 1803 was the founder of the glassworks at Marinha Grande which supplied much of the necessary glass to the rebuilding of Lisbon after the Great Earthquake. One of the most notable graves is that of Henry Fielding, the English magistrate, novelist and playwright who was the author of 'The History of Tom Jones’.  He came to Lisbon in 1754 suffering from consumption, gout, asthma, cirrhosis of the liver among other complaints and it was thought that the climate in Portugal would somehow bring about a cure. He wrote a journal of his trip entitled 'Journal of a Voyage to Lisbon’, but it was the last trip he ever made, as he died in Lisbon on 8th October 1754.  In 1830 a subscription was held for a monument on his grave, and because there was no surviving record of his burial, the cemetery authorities essentially had to guess at its location.

The British Cemetery, despite its name, contains the graves of people of many nationalities and faiths.  There are Dutch, Portuguese, American and German graves, among many others, and there are Protestants, Catholics, Jews and Baha´i interred within its walls.  The Dutch connection has remained, and for many years the Sunday services in the chapel still included prayers for the King (or Queen) of the Netherlands.

The British Cemetery is usually open to visitors and visiting hours are shown on the website. https://www.britishcemeterylisbon.com/.