The word Portugal derives from the Roman-Celtic place name Portus Cale. Around 200 BC, the Romans under general Decimus Brutus took the Iberian Peninsula from the Carthaginians during the Second Punic War, and in the process conquered Cale and renamed it Portus Cale around 136 BC.

(Port of Cale, at the mouth of the Douro river, modern day Porto).

Portugal traces its national origin to 24 June 1128, the date of the Battle of São Mamede. Afonso Henriques proclaimed himself Prince of Portugal after this battle and in 1139, he assumed the title King of Portugal. In 1143, the Kingdom of León recognised him as King of Portugal by the Treaty of Zamora. In 1179, the papal bull Manifestis Probatum of Pope Alexander III officially recognised Afonso I as king. After the Battle of São Mamede, the first capital of Portugal was Guimarães, from which the first king ruled. Later, when Portugal was already officially independent, he ruled from Coimbra. 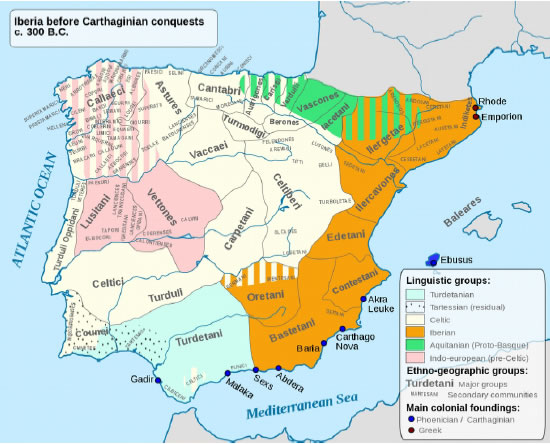 Lusitania in the south, Gallaecia in the north (Gal ==> Gale ==> Portus Gale / Porto ==> Portugal)
First Roman invasion of the Iberian Peninsula in 219 BC. <200 years, almost the entire peninsula had been annexed, starting the Romanisation of Hispania and Lusitania.

The Carthaginians under Hannibal were expelled from their coastal colonies in the Punic Wars by Scipio Africanus from 202 BC onwards. 205 BC Olissipo (Lisbon) was occupied. Portus Cale (Porto) on the Douro
River thrived as a commercial port between Olissipo and Bracara Augusta.

150 BC Lusitanians under Virathus re-took control. For years undefeated, Virathis' allies were bribed and he was killed by his own ambassador in 139 BC.

In 406 AD Suebi, Alans, Vandals overran Gaul and Hispania, establishing the Kingdom of Suebi (aka Gallaecia) in NW Spain and Portugal. Independent until 585, when annexed by Leovigild of the Visigoths as the 6th province of their empire.

A small civil war resulted in King Rodrigo's (last king of the Goths) enemies in Ceuta appealing to the Ummayad for help. After they invaded, Rodrigo was defeated and killed at the Battle of Guadalete in 711.

In 711-716 an invasion by the Islamic Umayyad Caliphate under the Emirate of Cordoba, comprising Berbers from North Africa and Arabs from the Middle East plus other Muslims from all around the Islamic world. Under the command of Tariq ibn Ziyad, they conquered the Visigoth Kingdom (capital Toledo) and founded the Islamic State of Al Andalus (from “Vandals”).

The Kingdom of Asurias, founded in 718 by nobleman Pelagius, defeated Ummayad in 722 at the Battle of Covadonga, the beginning og the “Reconquista”.

At the end of the 9th century, a county based in the area of Portus Cale was established under King Alfonso III of Asturias, and by the 10th century, the Counts were known as the Magnus Dux Portucalensium (Grand Duke of the Portuguese). Lisbon and the rest of what would become Portugal, was reconquered by the early 12th century.

Initially a vassal of the Kingdom of León, Portugal grew in power and territory and gained de facto independence during weak Leonese reigns.

In 1071 Garcia II of Galicia was declared King of Portugal and in 1095, Portugal broke away from the Kingdom of Galicia.

Henry's son Afonso Henriques proclaimed himself Prince of Portugal on 24 June 1128 and King of Portugal in 1139 with Coimbra as his capital {Guimarães (Vimarens) from 1131-1133}. The Templar Kinights joined to participate in the Reconquista and fortify the country, creating the Linha do Tejo line of castles across Portugal. In 1147 the 2nd Crusaders re-took Lisbon from the Moors.

In 1179 a papal bull officially recognised Afonso I as king. The Algarve was conquered from the Moors in 1249, and in 1255 Lisbon became the capital. Portugal's land boundaries have remained almost unchanged since then.