Christmas 1914, the First World War. On the front lines in Europe, there was a truce. That word does not mean much to many now, but over 100 years ago for the men in the trenches, it meant everything.

It was the worst and most violent conflict the world had yet known. At the time they called it the Great War, since they did not know there would be another. It was truly a war between empires in the old world sense – French, Russian, German, Austro-Hungarian, Ottoman and British. In 1917 the Americans would join them.

It had started over the fatal shooting of a duke and duchess of Austria, Franz and Sophie, in June 1914 by Serbian terrorists. Yet, the war plans had been laid by the commanders over a decade before.

Millions of ordinary people like you and me had been called up in nations all over the world over to serve. They had been farmers, clerks, shopkeepers, salesmen, mechanics and nurses. Their armies used the most modern weapons ever devised: massive cannons, machine guns, land mines, poison gas. The newly developed submarine, tank and airplane would also be deployed to make war on a truly industrialized scale. 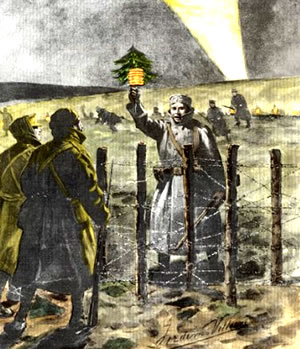 There would be nearly another four more years of fighting until it ended. By November 1918, over 37 million soldiers and civilians had been killed or wounded. Such was the carnage that the author Henry James called the conflict “too tragic for words”.

To the men in the field, it was being fought over stretches of pitted, muddy ground, if only to gain a few yards at a time. In the trenches, you could be killed by an exploding shell, poison gas or a sniper’s bullet at any moment. Death and pain were ever present.

In the holiday spirit many soldiers from both sides began to wish each other “Merry Christmas” across the lines. It is said that on Christmas Eve and Christmas Day 1914 in many places such as the British sector in Ypres, soldiers stopped fighting and met each other in the forbidden “no man’s land”. Many exchanged gifts, said prayers for the season, shared meals, and showed each other pictures of their families.

Some war photos and paintings will occasionally show a decorated Weihnachtsbaum, a German tradition that started as far back as the 1400s in Europe. We call them Christmas trees.

Many of them sang Christmas carols as well. One of the more famous was a song called Stille Nacht, Heilige Nacht, written by the German lyricist Joseph Mohr in 1816. The music was composed by Franz Xaver Gruber two years later. You and I would know it by the name “Silent Night, Holy Night”. Hence, soldiers on both sides would have been able to sing along.

The 1914 Christmas Truce was unplanned. No one told them to do it. In fact, the following years their army commands specifically forbid them to repeat the events since it was “bad for the war effort”. Yet, for a small time, there was a silence and a sharing. It has become iconic as a symbol of peace and humanity in a time of bitter struggle. 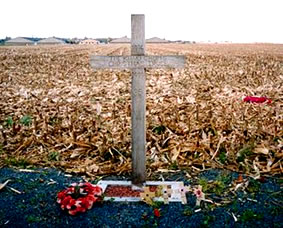 We cannot imagine the scale of death as ordinary people safe in our homes today. To be sure, five months earlier, hardly any of them could have either. For those men it was a daily struggle of pain and bloodshed, but to us it is now just words on a page, a distant history.

Death came easily in the trenches of the First World War. It does not seem to have stopped for some in the world. There are still daily reports of carnage in the world, and our loved ones continue to serve in battle zones like Afghanistan and Iraq far from their families.

Yet, on that cold Christmas day in the trenches, soldiers who had been killing each other for months paused to shake hands and show good will towards men, if only for a moment.

They celebrated the birth of a small child, who came to show us that in the midst of the strife, the hurts and the uncertainties of the world, we might know a stillness, a wonder and a peace.