The Brazilian couple Rosa and Raquel moved to Alentejo two and a half years ago and have not been wasting any time. They decided to start a sourdough bread bakery on their land and it quickly became a success. In the center of production is the old woodfired oven next to their house and the grain comes from local farmers “so that the money stays”.

Making about 200 kilos of bread a week, business is going well. But their journey from the other side of the Atlantic has been anything but straight. 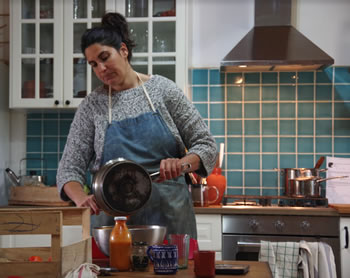 Raquel is a fifth-generation bread maker, who learnt the art of baking from her grandmother. She prepares the dough by hand in a small building next to their house. “But that’s gonna change!” she says and slaps her hand on a brand-new baking machine. All the bread is made with sourdough, or “mother dough” as it is called in Portuguese, and most of it is delivered to the Tamera village 25 kilometers away. The rest is sold to friends and in local markets. As much as possible, they want to keep money in the area by supporting local businesses. It’s their way of protesting against the industrial production of food.

Living the quiet life of a baker wasn’t always Raquel’s dream though. Back in Brazil, she was working for the television network Rede Globo, making and editing films and documentaries. But she is not looking back. Instead, she wakes up at six in the morning on baking days, puts water for coffee, lights a fire in the oven and starts working. By nine, the dough is finished. Getting it just right has involved a lot of trial and error. “Everything needs to be carefully calculated”, she explains. “The bread has to be ready exactly when the oven is at the right temperature.” When the oven is hot, she removes the coals and cleans the inside from ashes with a wet cloth. She measures the temperature with a special instrument, and when it cools down to about 300 degrees, the first round of bread goes inside. The oven was built by the previous owners and has been in use for over fifty years. 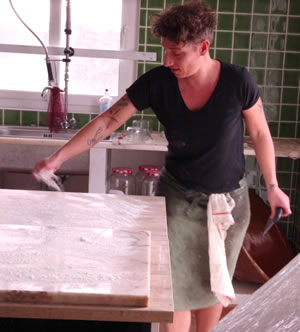 Raquel and Rosa try to work only with local farmers. The rye and wheat come from a woman who farms grain 40 kilometers away and one of their breads is made with figs from the Algarve and walnuts from Alentejo. They are also trying out kamut, an old and hardy kind of  wheat. “And this is barbela, a grain that’s very trendy right now.” Raquel points at some loafs that are a bit more yellow than the others. “It was brought to Portugal by the moors”. The barbela wheat was almost extinct after the second world war, when other kinds of wheat, with bigger yields but less nutrition, became popular.

Meanwhile, Rosa is in the house making jam from persimmon. “It’s the first time I’m trying with this fruit”, she says. “It’s from a friend of ours who has a tree that is over a hundred years old, and that was planted by her grandmother”, she explains while adding sugar, cinnamon and lemon. “And now the tree is so full of fruit she doesn’t know what to do with it. A while back we made a jam with medronho and it turned out amazing!”, adds Rosa, obviously a food lover.

Started with thoughts of cheese
Rosa and Raquel met in Canada. Rosa lived there for twelve years, making food in farmer’s markets and then spent the rest of the year travelling. Meanwhile, Raquel was studying nutrition. Eventually they decided to move to the countryside but going back to Brazil was not an option. Both descendants of Europeans, they decided to travel in their ancestral lands, Greece, Italy and Portugal while figuring out the details of their future.

They also wanted to learn some practical skills that they could use to make an income. “I always knew I wanted to live in the countryside and work with the land somehow, and not just live on it”, says Rosa. “We wanted to find a way for us to find work outside the city without having to have internet-based jobs. I never saw myself like that. We wanted to be able to produce something”. So the couple travelled to France to learn how to make cheese, and spent six months working in cheese farms, gaining knowledge and experience working with the farmers.

“We met people who were truly passionate about what they were doing”, says Rosa as she is straining the jam. “There was for example a young mother that spent the summers taking care of four borrowed cows on municipal lands, and then made cheese in a caravan. Meanwhile, she was living in an apartment in the village. Finding your own way like that really inspired us”, says Rosa.

Ending up in Portugal
After France, their plan was to return to Canada. But when Raquel’s father, who had moved back to his birthland Portugal, became ill, the couple decided to stay and care for him. By the time he tragically passed away not long after, Raquel and Rosa had already gotten used to the idea of living in Portugal. “It’s thanks to the inheritance from my father that we were able to buy this”, says Raquel, looking out over their land. “And it was only when we came to this 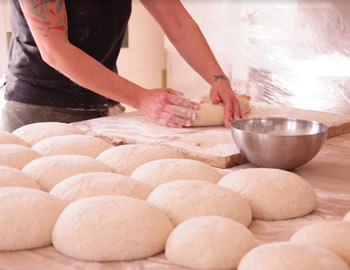 area that we felt at home”, she says, referring to the southwest. ”It was like seeing another side of Portugal. I think it was the mix of locals and all the foreigners that have come here recently that attracted us the most”, she says.

But it would soon turn out that legal restrictions make it almost impossible to produce cheese in a small scale in Portugal. “You have to be industrial here”, Rosa explains. ”When we went to the municipality to ask what was required to make a small cheese business, the man simply told us that ‘this is not France’. Then we sat there talking for two hours but he didn’t have any answers.” And while the prospects of a cheese business grew darker, another door opened. They saw an increasing demand for Raquel’s homemade bread. So they decided to go for it.

Why is it important that the money stays here?
“I think it creates more power and resilience in the community”, says Raquel. “Where there is no people and big areas are left empty and abandoned, monocultures like olive and the eucalyptus tend to come.” Rosa fill in: “It is also about the social side of it. About creating personal relationships with the people here. Sure, you can buy an artisan product from France but you will have no relationship whatsoever to the person that made the product. And if people here can get by economically from producing something, it means that more people can stay. And that’s really one of the big challenges here, finding a way to make a living. So the more we consume here, the more is needed to be produced and eventually, this can bring a better quality of life for the people.” 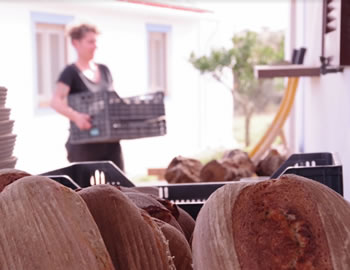 They also came with an idea to be part of the whole circle of production. “When we work together with the producers, we learn a lot about the seasons, the grains, the mills and the process from grain to flour to bread. If we’d just go and buy the industrial flour we wouldn’t learn anything”, say Raquel.

The couple believe that the recolonization of the land will keep the local culture alive and monocultures away. “Local economy, knowledge and culture will disappear unless there is someone here to take care of it”, says Rosa. “We want to support techniques that are dying, for example by taking our grain to a local wind-powered mill.”

“The global food system today is designed so that you will consume industrial products, but it is possible to do things in another way”, she continues. “It is not about being against technology, but about keeping things in a human and personal scale. Besides, the feeling of contributing to keeping the local culture alive gives a great sense of joy to our lives, and that has a value of its own - knowing the people that grow the food you eat.”

According to Raquel, producing food in a small scale is “pure resistance”. “I see this region as a laboratory”, she continues, “where people are coming back to the land and try to find new ways to make a living.”