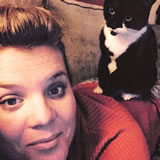 Veterinary surgeon Scott Miller, well known to hundreds of pet owners across the Algarve, is the star of Vet on the Hill which launches on UK TV’s More4 this coming Monday evening, March 7 at 9pm.

Emma, who was educated at Barlavento English School and the International School of the Algarve, began her nursing training with Scott when he was a partner in the Lagos VIP Veterinary Surgery.

After the Miller family returned to the UK a few years ago, Scott convinced Emma to join him and she is now the Head Nurse of his three bustling practices in Richmond Hill, St Margarets and Old Isleworth.

Emma comes from an impressive veterinary lineage and longer-term Algarve residents well may remember her grandparents, Dr Robert (Bob) Townson MRCVS, and his veterinary nurse wife Jennifer, who together ran the Ladeira da Nora veterinary clinic, near Alvor, from 1970 to 1986.

Bob, a founder of the British Small Animal Veterinary Association and a renowned international show judge, was the first English veterinary surgeon to practise in the Algarve. In the early 1960s, Jennifer was a founder member and first chairwoman of the British Veterinary Nursing  Association in the UK, and was instrumental in getting veterinary auxiliaries recognised as ‘nurses’ and in establishing a proper training scheme for the profession.

Emma’s dad, man of action Steve Townson, is no stranger to the media spotlight as the extreme fishing expert’s Fishing Adventure Amazonia TV series was broadcast worldwide including on Discovery UK. Emma’s mother, Jane, a journalist, was Editor of Algarve Magazine and Algarve News in the 1980s.

Vet on the Hill, follows the day to day life of Scott and his dedicated veterinary team, giving a genuine insight into the highs and lows of a small-animal practice. Viewers will warm to big-hearted, charismatic Scott, his delightful family, his endearing patients and their loyal – and sometimes famous – owners.

And for Emma, there’s an emotional on-screen reunion with her own horse, Va-Va-Voom, which she had to leave on livery in Portugal when she moved to England.

Scott, a passionate animal welfare advocate, has an impressive track record as a television presenter and documentary film maker.  In Britain he has been a regular veterinary expert on This Morning, The Paul O’Grady Show, GMTV, BBC Breakfast News, Blue Peter, CBBC, Sky 1’s Pet Nation and, more recently, a lead presenter on children’s programme, Who Let the Dogs Out.

“Filming Vet on the Hill has been an exhilarating and challenging experience. A normal day at the clinic is hectic enough – but when you have a film crew following your every move, that’s another story! Our veterinary team is extremely passionate and caring and I think this comes over really well in the series,” said Emma.

“It’s also wonderful that my family and friends back home in Portugal can get to see what I do every day at work.  And I am extremely proud to be part of the veterinary nursing profession that my grandmother helped to gain recognition.”

You can get More4 on: