The Sound Of Music - Aljezur Style!

It may have been the Swiss Alps rather than those in Austria, but the hills still came alive to the Sound of Music - Aljezur style!

As we all know, the Von Trapp family secretly fled Austria into the Swiss mountains. But popular Aljezur band Off The Lip were last month secretly whisked INTO the Swiss mountains for one of their most glamorous gigs, on the snow-covered slopes of the rather swish Swiss ski resort of Verbier.

Verbier is an alpine village located in the canton of Valais, south-west Switzerland, a holiday resort and ski area recognised as one of the premiere "off-piste" resorts in the world.
It attracts such luminaries as Prince William and Kate, the Duke and Duchess of Cambridge, Prince Harry and Sarah, Duchess of York, who owns a chalet there with her daughters, Princesses Beatrice and Eugenie.
But recording stars like James Blunt and Diana Ross who also frequent Verbiers have now been joined by Aljezur’s own recording stars, Off The Lip.

In an atmosphere of total secrecy three members of this west coast band—Jack Golds, Hugo Fontainhas and Ricky Brogden—were flown out to Verbier to perform one of their energetic shows.
The fourth member of the band, Jack’s brother Louie, was already in Verbier where he works during the ski season for luxury chalet company Bramble Ski, totally unaware that his colleagues were on the way to join him for the company’s end-of-season party.

(Jack, a trained lifeguard who has worked on all the local beaches, and Louie live in Aljezur and went to school there. Louie is a keen snowboarder, and both brothers are also surfers who enjoy riding the west coast waves). 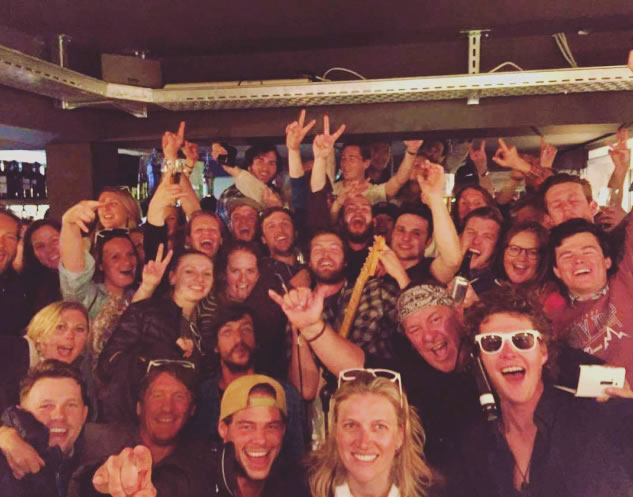 The event in Switzerland was organised at the resort’s famous Le Shed venue as a thank-you to Bramble Ski’s staff after a successful winter season. The owners of Bramble Ski didn’t just know of the band through Louie; they also have a home in the Aljezur area where they first became aware of Off The Lip.

Harmonica player Louie, who thought he was performing one of Off The Lip’s original songs solo to a backing track, was caught totally by surprise when his brother Jack and the other band members appeared through the crowd and joined him on stage.
It took a moment to recover from the emotion of all being together after a five-month break. But the new arrivals, who brought guitars but borrowed the rest of the equipment from a local group the Dicktators, then joined a shell-shocked Louie to play their second single release 'Reggae in the Morning' as his ecstatic crowd of work colleagues cheered them on.

But the show was only getting started as Off The Lip went on to perform a full set showcasing their brand of unique Algarvian surf rock and roots style music in front of a packed audience, many of whom who, by the end of the night, were dancing on the tables!

Bramble Ski enthused on their Facebook page: “What an epic end to a brilliant season!”

And the band, who spent their last day on the snow slopes before heading back to Portugal, posted: “Thank you everyone for last night—our first international gig, a surprise end of season concert that had everyone rockin’ with us in Le Shed!”
Louie declared after the party: “I am the happiest man in the world! It was one of the biggest shocks of my life when Jack, Hugo and Ricky emerged from the audience. I really have to thank Bramble Ski for flying them out.
“It was the best night of my life; a truly epic end of season staff party!”

Guitarist Richard Brogden told us: “Everything was organised by Bramble Ski. We flew from Faro to Geneva, where we boarded a shuttle link, we drove out of Geneva alongside the lake to the village of Le Chable, where we were met by Colin, a director of the company and taken to a beautiful apartment.
“Overall, we stayed in Switzerland for three nights. The apartment balcony looked out across valleys and snow-covered peaks and in the field right below us there was a herd of cows with those typical heavy Swiss cowbells around their necks, clanging away.
“On the day of the show Louie and the staff were having drinks up the mountain before going down to the surprise party at Le Shed. The three of us had to hide in a nearby pub (no great hardship there!) while they arrived in the village and went into Le Shed.
'It was wonderful to see the surprise on Louie’s face. He didn’t see the rest of the band approach until we were standing on the stage! When the crowd realised the significance, they went wild too!
“What an experience the whole thing was! Absolutely fantastic and something we’ll never forget”.

Now Off The Lip are busy back in the studio putting the finishing touches to their debut album "Local Foreigner" which is due for release in June.

All in all it was a fantastic couple of days for the band, who were the talk of the town - so much so that plans for a select Swiss tour are taking shape to promote the upcoming album, as their phones started to ring before they even got back home here to the Algarve’s west coast.

Below you can see the story of the band’s Swiss experience in a short 5 minute video.