I am determined to bring to fruition a project into which I have put a huge amount of work during the past ten plus years, writes Michael Pease.

This would honour those Portuguese who rescued from the sea not far short of 2,000 people of many different nationalities during WWII. My proposal is for the placement of a Memorial in Faro and, futuristically, perhaps a replicate in The Açores, to commemorate one specific incident on November 30th, 1943, in which two local fishermen saved the lives of six American servicemen, the only survivors from the eleven-man crew of a US Liberator bomber [See attached short summary of the incident].

The overall proposal has received widespread verbal and written  support from sources both in Portugal and externally, including from the Portuguese community in the United States. Critically, the proposal has also received the written support of the former Mayor of Faro and the former Regional Directors of Tourism and of Culture.

But this support has not translated into significant financial contributions other than those that have permitted such as brochure and folio production together with mailing, especially to the United States.

A quite excellent and appropriate site for the Memorial was agreed that overlooks Faro harbour. This is especially appropriate to the specific incident and would be a focal point of attraction in the City of Faro. 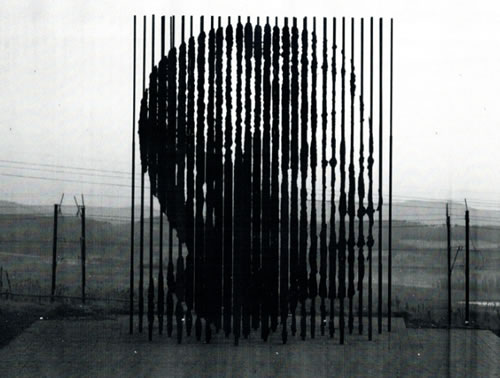 The original sculptor proposal that was generally acclaimed amongst others that I received would have cost €65,000 to construct and erect, inclusive of lighting and water. Now, because the funding support has not yet been forthcoming, the sculptor has proposed an imaginative concept similar to that of The Nelson Mandela Memorial (see image right). This revised proposal would cost about €20,000 all inclusive.

So, I am writing to some on this mailing just for information and to others asking if you would be prepared to support what I propose with a contribution commitment. I am not seeking funds at this juncture. I just need a financial commitment. My wife and I are prepared to contribute substantially from our own resources but, as she has said, on the basis that others contribute significantly.

Once I have sufficient funding commitment to meet at least the cost of the modified sculpture proposal it is my intention to seek a meeting with the current Mayor of Faro at which I will not only request his confirmatory written support, given originally by his predecessor, but will also seek financial backing from the Câmara (Local Authority) which, after all, will be the principal beneficiary of the proposal, to either the original or updated designs.

With kind regards and my hopes that you will be prepared to support what I believe is a worthwhile demonstration of regard for Portuguese efforts during WWII.

A HEROIC TALE OF FARO FISHERMEN

On November 30th 1943 a US Liberator bomber, crashed into the sea some 6 miles south of Faro, Southern Portugal following a navigational error and lack of fuel. Five of the 11-man crew were killed in the crash; six survived. The wreck was not discovered until 2007. 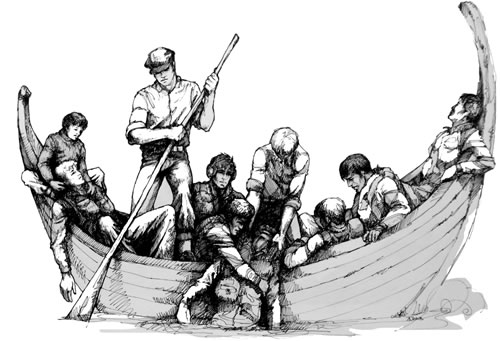 The crash occurred close to a 5m open fishing boat manned by Jaime Nunes, José Mascarenhas and the latter’s 13-year old son, Manuel. They immediately abandoned their nets and set about rescuing the five survivors, two of whom were badly injured.

Conditions were bad on a moonless night. Nunes and Mascarenhas provided what succour they could to the drenched and shattered crew by providing them with what limited provisions and clothing that they had on board. But they were obliged to wait for the incoming tide that would permit them to row their heavily-laden craft back to shore. So they did not reach the fishing harbour until 3.15 a.m. on December 1st.

Once on land, the airmen were taken to the nearby hospice for medical treatment. Subsequently, the surviving crew were evacuated to their home base in Morocco.

Regrettably, Jaime Nunes and José Mascarenhas were sidelined by the authorities despite their courage and devotion to the rescued airmen and their personal costs in lost clothing.

Much later, in July 1999, due to the persistence of a Faro journalist, Carlos Guerreiro, Jaime Nunes was honoured for his actions through the presentation of a plaque at Gambelas University attended by dignitaries from the United States and Portuguese governments. The Mascarenhas’, father and son, had died prior to the event.

It is now proposed to erect a monument overlooking the marina, that captures the heroism of Jaime Nunes and José and Manuel Mascarenhas in particular but which also pays homage to the many Portuguese fishermen from the mainland and the Atlantic Islands who rescued combatants and non-combatants from the sea during WWII (1939-1943).

The proposed monument would be constructed in bronze or steel (dependent upon funding availability), incorporate water and lighting features, and have a separate explanatory stand inscribed in both Portuguese and English. The Monument would be a major feature in Faro, attractive to citizens and tourists.