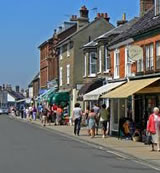 Britain’s high streets are changing as a result of the changes in consumer shopping habits.

In the first half of this year, an average of 15 stores closed every day. At the same time, the number of new shops opening was at its lowest level in five years, according to a new report on Britain’s retail sector.

The rise in popularity of online shopping has hit more traditional shops, particularly those offering garments and fashion, with many shutting their doors for the last time.

In their wake have been tobacconists, estate agents and jewellers. Other retailers filling in the gaps have been health care operators, food and beverage operators and discounters.

The pressure on shops has been the result of a greater propensity to buy items online as well as increases in business rates.

The report, from accountancy firm PwC and Local Data Company, found that 2,656 outlets closed and 2,153 opened on Britain’s high streets between January and June this year. This was a shortfall of 503 stores.

New openings were at their lowest rate since 2011, a time when the Great Recession was really biting.

Fashion outlets took the greatest hit. During the period, 206 closed with only 119 opening.

Consumer research group Kantar warned last week that fashion sales were now suffering another marked decline in addition to that during the financial crisis. Consumer spending on clothing, shoes and accessories was down £700 over the course of January to September this year compared with 2015.

Some analysts believe the trend will impact further next year.

The biggest net drop (164 shops) was in Greater London. The north-east of England was the most stable, with a loss of just five stores, but there was no region which could claim an increase in shop numbers.