A juvenile Iberian Imperial Eagle has been released after a period of intensive treatment for baldness.

The young bird, the progeny of one of only 15 breeding pairs in Portugal, was under a surveillance regime and was observed to lack the necessary feathers to fly, a distinct disadvantage as a two-month-old keen to leave the nest and strike out for independence.

An assessment led to some quick thinking and the eagle was captured and taken to Lisbon council’s Wildlife Rescue Centre where a team started treatment.

The youngster is now six months old, has a full set of feathers and has been set free in the Special Protection Zone of the Guadiana Valley, near his home in Mértola: he also has been receiving some basic hunting tips having recovered his feathers and his dignity.

Now the eagle is free to roam, he will be closely monitored by a team from the League for the Protection of Nature and the Institute of Nature and Forest Conservation who will follow the eagle’s early flights to ensure his successful reintegration.

"We will also use remote monitoring technology, which includes GSM transmitters and VHF transmitters, which will complement direct observation," said staff from the League for the Protection of Nature.

This juvenile eagle is one of only 18 born in Portugal in the 2016 breeding season, 13 of which reached the point where they were able to leave the nest. This week's rescue and release "will contribute to reinforce the small Portuguese population of this species that is so threatened," said a team spokesman.

This dedication to the preservation of the Imperial Iberian Eagle species, also known as the Spanish Imperial Eagle or Adalbert's eagle, is all down to the Imperial LIFE Project, which involves a consortium of institutions committed to the eagle’s conservation.

The Iberian Imperial Eagle (Aquila adalberti) has a vast wingspan of up to seven feet, lives only in the Iberian Peninsula and is one of the most endangered bird species in the world with only about 500 couples left in Portugal and Spain. It has the dubious honour of being Critically Endangered in Portugal and Vulnerable Worldwide.

In 2016, 15 couples nested in Portugal in Special Protection Areas including the Guadiana valley but until a nesting couple was confirmed in 2003, Portugal was likely to have had none.

Since 2003, these magnificent eagles slowly have been increasing in numbers but remain critically endangered. 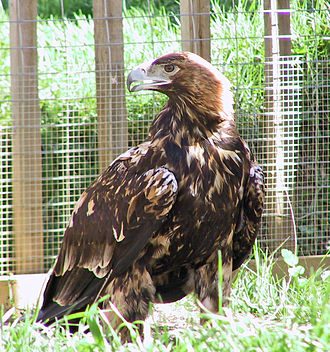 Iberian Imperial Eagles repopulate Doñana wetlands
(News)
The Iberian Imperial Eagle population is said to have been brought back from the threshold of extinction. The historic boom in numbers is due, in part, to the birth this season of 15 chicks in Andalusia’s ...
Created on 10 August 2016
EC protection for Spain's Doñana Park - what about the Algarve's Salgados area?
(Salgados 'Praia Grande' development)
... unique biodiversity in Europe, featuring a great variety of ecosystems that constitute the habitat of critically endangered species, such as the Spanish imperial eagle and the Iberian lynx, as well as ...
Created on 11 May 2016

Wait a minute, it was not an American Bald Eagle on a covert mission, was it? And taken in for questioning?
Refresh comments list