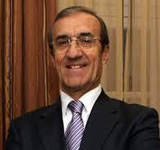 Former Olhão mayor, Francisco Leal, and his former head of Urban Management, Ditza Reis, have been accused by the public prosecutor's office of corruption in the licensing of the Village Marina site.

Leal says he has "a clear conscience" and that “no one corrupted me while I was president,” between 1993 and 2013, the latter claim causing much hilarity among local residents.

The investigation by the Department of Investigation and Criminal Action in Évora relates to to the licensing of the 'Village Marina de Olhão' development, built by the company Construções Largaça.

The project was approved by the council and the developer paid out €490,000 as a compensation fee to the council due to the use of public space as part of the building project.

The compensation calculation was carried out by the council architect Ditza Reis. The prosecutors consider that this amount does not comply with the municipal building regulations and that the real compensation figure should have been in excess of €7 million.

The prosecutor claims the municipality was financially harmed and the defendants "acted in order to benefit the company."

The former mayor says that "the calculations were made by the technicians" and that his role was limited to "signing the license."

The investigation was carried out by the Judicial Police in Faro, which found evidence of corrupt payments but this case was archived.

"No one corrupted me while I was president," said Francisco Leal, who had already been accused of corruption in public office due to the illegal licensing of a villa in Fuseta.

Continuing suspicion as to Ditza Reis' probity continues, currrently over her dedication to oversee the modernisation of Olhão's historic centre using a set of plans from a Lisbon-based firm of architects, Baixa Atelier.

In the face of stiff local opposition from concerned locals, notably at a November public meeting, Reis' behaviour was indicitaive of a public official who already had made her mind up and than any questioning or disagreement with the planned expenditure was not to be tolerated. With a multi-million euro project in the offing, the chances increase that illicit payments may form a covert part of any contract.

The current Olhão mayor, Antonio Pina, quickly picked up the crowd's mood at this public consultation and, being aware of the opposition in the local press and the number of signatures on an international petition to 'save Olhão's historic centre,' he scrapped plans for the erection of a 22 metre viewing tower and conceded that the Baixa Atelier plans needed drastic revison before they had any chance of being acceptable.

Why is Ditza Reis allowed to hold an important position of influence as Borough Architect in this local authority whilst under investigation for corruption?

Pina, surely you can find an untarnished suitable candidate for this role and restore credibility and confidence in the Council.

Seriously?
+4 #5 Dobs 2017-01-02 14:19
Why is Ditza Reis allowed to hold an important position of influence as Borough Architect in this local authority whilst under investigation for corruption?

One has to wonder what juicy jobs are lined up for them. Macario did pretty well after his "departure".

In Feb 2015 he received the Order of Merit from President Cavaco Silva and in July 2016 was appointed as regional coordinator in the Algarve for the Socialist Party. It's not so much 'having a clear conscience' as having no conscience at all. He ran Olhao for years like a personal piggy bank for him and his mates. Hopefully, Evora prosecutors will nail him once and for all.
+10 #1 TT 2016-12-27 20:08
One has to wonder what juicy jobs are lined up for them. Macario did pretty well after his "departure".
Refresh comments list