The bookies’ favourite sung, ‘Amar Pelos Dois’ at the competition hosted in Ukraine at the International Exhibition Centre in Kyiv.

Sobral’s victory is the first ever gold for Portugal, clearly helped by millions of prayers during the recent papal visit and has ended Portugal’s record of having the most appearances without a win.

Portugal participated in the Eurovision Song Contest for the first time in 1964, represented by Antonio Calvario with the song 'Oração.' The closest Portugal ever came to winning the contest was in 1996, when Lúcia Moniz finished 6th.

This year’s final came down to Portugal and Bulgaria’s 17-year-old Kristian Kostov but Sobral accumulated a staggering 758 points for his song.

The Portuguese singer described the win as a "victory for music, with people that make music that actually means something.”

'Amar Pelos Dois' was written by Sobral's sister, Luísa, who finished third in Portugal's version of Pop Idol, a contest in which the Eurovision winner had finished seventh.

Compère, Graham Norton, noted that the Portuguese singer looked as “nonplussed now as he has throughout this competition” despite poor odds at the start of the semi-finals when Italy was the favourite.

An estimated 200 million viewers tuned-in their TVs to watch the contest. On YouTube, the final was followed by a 4 million people, breaking previous records.

Salvador was joined on stage by his sister, who also wrote and composed 'Amar Pelos Dois,' when performing the reprise of their winning song. Luísa covered for her brother during many of the rehearsals, as Salvador himself could not be present in Kyiv for the full two weeks due to health problems.

How the result was determined

The 26 finalists were made up of 20 qualifiers from the first and second semi-finals held on the 9th and 11th of May, and six automatic qualifiers including the so-called 'Big Five' countries - France, Germany, Italy, Spain and the United Kingdom - and the host country, Ukraine. 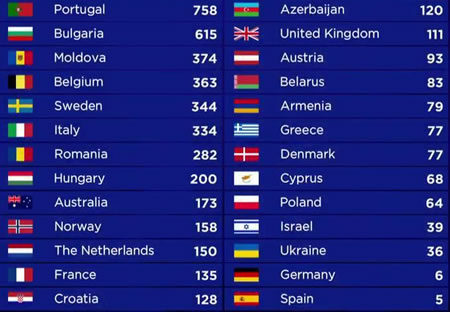 Portugal held the record for the most appearances in the contest without this 2017 win in Ukraine with Sobral's ‘Amor Pelos Dois.’

Portugal's debut entry was António Calvário with "Oração", it was not a successful debut for the country, with Calvário coming last in the contest. Since then Portugal has come last on two further occasions, in 1974, when Paulo de Carvalho sang "E depois do adeus" and in 1997 when Célia Lawson performed "Antes do adeus".

Despite its last-place finish in the contest, "E depois do adeus" had at that time gained national notability for being one of the two musical signals to begin the Carnation Revolution against the Estado Novo regime.

Prior to Moniz finishing sixth in 1996, Portugal's best result in the contest was two seventh-place finishes, for Carlos Mendes in 1972 and José Cid in 1980. Despite having some really weak results the 90s were the most successful decade for the country reaching the top 10 four times.

Portugal had admission to take part in the 2000 and 2002 contest but refused. Its place was taken by Latvia both times, which ended up winning the contest in the latter year.

Since semi-finals were introduced in 2004, Portugal had failed to reach the final eight times, including from 2004 to 2007.

The score of 758 points beat the entry from neighbouring Spain which managed 5 points and came last.

How posh is he?

Sobral was born in Lisbon, into a former noble family, the son of Salvador Luís Cabral Braamcamp Sobral and Luísa Maria Cabral Posser Vilar. He is the grandson by paternal side of Salvador José de Almeida Braamcamp Sobral and Maria Elisa Perestrelo de Matos de Figueiredo Cabral, and by maternal side of João Luís Posser de Andrade Vilar and Luísa Maria de Melo Breyner Freire Cabral. His fourth great-grandfather was the politician Hermano José Braamcamp de Almeida Castelo Branco. So, rather posh then...