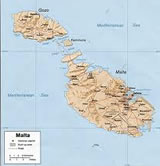 Malta, a fiscal paradise for the Italian mafia, Russian loan sharks, the Turkish elite and 423 Portuguese national who have taken full advantage of the local tax system in this 'pirate base.'

After the Panama Papers, we have the Malta Files which show who is behind around 50,000 companies registered in an island within the EU but that fails to meet fraud prevention requirements, thus actively encouraging those wishing to evade tax.

"In addition to benefiting from the advantage of being a member of the EU, Malta also welcomes large companies and wealthy private clients seeking to evade tax payments in their countries," according to the Times of Malta this Saturday, May 20th.

In an investigation carried out by a network of investigative journalists,* led by the German Der Spiegel, of which Portugal’s 'Expresso' is part, thousands of documents have been analysed that show how companies use this tax system to full advantage, using Malta as a 'pirate base' for tax evasion within the European Union, according to the Maltese daily.

In data from 1965 to the end of 2016, Expresso journalists found 465 Portuguese citizens who are shareholders of companies in Malta.

"Of these, 381 are resident in Portugal and directly control 257 companies in that country, and there are 89 people who are registered as Portuguese but live in other countries."

"In the list are some well-known businessmen who in the last decade had been indicted for fiscal fraud, for example, Joe Berardo, Miguel Pais do Amaral, the Sacoor brothers - and many owners of busiensses with large debts in Portugal such as Nuno Vasconcellos of Ongoing, João Gama Leão of Prebuild, Eduardo Rodrigues of Obriverca, and Alfredo Casimiro of Urbanos."

Over 90% of these companies set up in Malta by Portuguese residents were established after 2007 when the Maltese government introduced a scheme of tax refunds for non-resident taxpayers whose income is not obtained in Malta, resulting in an effective tax rate of 5%, down from a headline rate of 35%.

The Maltese government wanted to "increase the flow of money into the coffers of local banks by developing a political strategy to stimulate the market for financial services...”

In this, it has been successful but it is now up to the Portuguese Tax Authority to check the named Portuguese with overseas assets in Malta and see if they have been declaring the correct amounts on their annual tax returns.

Whether anything ever will be done about the situation in Malta remains to be seen but the undewhelming response from the Portugurese Tax Authority after the Panama Papers revelations, leads the public correctly to conclude that there is one set of rules for the rich and another set for the rest of us.

0 #3 Charly 2017-05-24 18:21
Every country can grant "special favors" to foreign investors, foreign companies, foreign bank savings account holders, etc. and they definitelyy do.
Portugal is the offshore haven or the Chinese, Amsterdam is the offshore place for EDP Portugal, and a huge number of companies have their financial haven either in >London, Hong-Kong or somewhere else.
That is the price to pay for the GLOBALISATION OF THE WORLD and in fact as lond as the concerned people or colmpanies pay their taxes nothing is illegal !!!!
0 #2 Rog Talbot 2017-05-22 20:51
The problem with this euro currency is that it is like an asylum where the management are the loonies. Somehow its the sane eurozone citizens who find themselves locked up. When can we have a Venezuela type revolution ? 50 days agitation with a similar number dead and many more damaged and still no end in sight.
C'mon eurozone lads and lasses - don't leave it just to the UK to rock the boat !
0 #1 Peter Booker 2017-05-22 09:26
It is idiotic to have a currency-based union with different rates of tax. But as you say, Ed, it is the rich who benefit, and if they are benefiting, somebody else is paying.
Refresh comments list