Pedrógão Grande fire a month on - what do we know so far?

The fire that broke out on June 17th in Pedrógão Grande killed 64 people and wounded more than 200. A month later, the cause of the fire remains unknown, despite reports and analyses.

The Pedrógão Grande fire took a week to extinguish, spread to neighbouring counties including Castanheira de Pera, Figueiró dos Vinhos and Góis, and burned a total of 53,000 hectares.

What we know so far:

The alert was given at 14:43 on June 17th, received by the Leiria District Relief Operations Command. 47 operational and 12 support vehicles were mobilised immediately, in addition to a helicopter, according to the National Authority of Civil Protection (ANPC).

In a reply sent to the Prime Minister, the ANPC said that the fire had "a very rapid evolution throughout the theatre of operations, putting exceptional pressure on the usual communications support networks," i.e. the SIRESP (Integrated System of Emergency Networks and Security Networks of Portugal) and ROB (Firefighters Operational Network) communication systems.

The ANPC logged failures in the SIRESP network, between June 17th and June 20th, right in the thick of things and secondary communications systems has to be used.

The 'time line' of communications registered by the ANPC reveals "almost complete" failures in the first hours of the fire.

According to the 'time line’ log, it was during these initial hours of the fire that there were several calls for help from people surrounded by fire to which operational command could not immediately respond, due to communications systems failures.

In the face of this failure, a new communications plan was developed based on using the old ROB network.

In another document, the ANPC acknowledges that there were evacuations that had been identified as necessary but which could not be carried out in a timely manner, namely at Troviscais Fundeiros, Torneira, Casal Valada, Vermelho, Mó, Monteiro, Várzeas, Vila Facaia and Casalinho," due to the speed of the fire and its intensity."

The GNR did not receive any "operational decision" on the need to close the EN 236-1, nor did it receive "any information that warned of a potential or actual risk of driving" on that route. This road was only cut off after GNR personnel had found dead people in cars - this was at around 22:15 on June 17th.

The number of fatalities on this road was 33 (with 30 on just one small section of the road), the remaining 14 died "on roads and access roads to EN 236-1, to which they were forced as they tried to flee from the fire."

At 21:00 on the 17th, the GNR had 17 patrols with 37 personnel, supported by 19 vehicles and 19 SIRESP radios. They blocked the traffic at several points along the IC8.

Nearly two hours later, the national operational commander requested the reinforcement of the GNR in the theatre of operations.

GNR personnel had the "only alternative means of communication" their mobile phones which also had poor and degraded reception.

In a report made at the request of the Government, the company that owns the SIRESP system concluded that "there were no interruptions in the operation of the network, nor was there any base station that was out of service as a result of the fire."

However, the company admitted that there were "saturation situations" which were caused by "a traffic demand exceeding the available system capacity."

In a reply sent to the CDS/PP, the Government stated that the destruction of fiber-optic links, installed to ensure that SIRESP stations are linked, caused five of these 16 stations to enter ‘local’ mode.

These failures led to the use of redundant communications systems, such as the Firefighters' Operational Network, the Strategic Civil Protection Network and mobile phone networks, which ensured a degree of communication, but with clear limitations.

In another report, the General Secretariat of the Ministry of Internal Affairs, indicates that the National Authority of Civil Protection should have requested a mobile communications station "in good time" from SIRESP when it found that "the situation was becoming exceptional."

The mobile station (a self-transported base with satellite links that allows connection to the SIRESP network) was requested from the company that manages these mobile stations. This was at 21:15 hours on the first day of the fire. The unit arrived at 06:26 hours the following day and was operational by 09:32 on June 18th.

The mobile communocations station company (SGMAI) reported that when the mobile station was requested, "it was already impossible to have a mobile station in Pedrógão Grande in time to help mitigate the occurrences that resulted in deaths."

For the minister, SGMAI was responsible for the management of the two mobile units that allow connection to SIRESP, and "could not ignore that fact that one was broken and the other had been sent off for repair.”

Constança Urbano de Sousa also decided to carry out an independent study on the operation of SIRESP in the event of major accidents or catastrophes. This will be carried out by the Institute of Communications despite its funding links to telecoms operators.

The ministry also has asked the Linklaters' law firm to clarify clause 17 in the SIRESP contract which allegedly frees SIRESP SA from any failures in the emergency communication network that is due to "unpredictable and irresistible cases of force majeure."

According to the Government, in the light of the evidence collected at the site of the fire, it appears to have been started by natural causes, even though a criminal investigation is under way.

A technical report from the Portuguese weather service concluded that there is a low probability, "but not zero," that a lightning strike started the Pedrógão Grande fire.

An independent technical commission has now been set up to determine the facts about the fire. The commission, made up of 12 experts, will run for a maximum of three months. 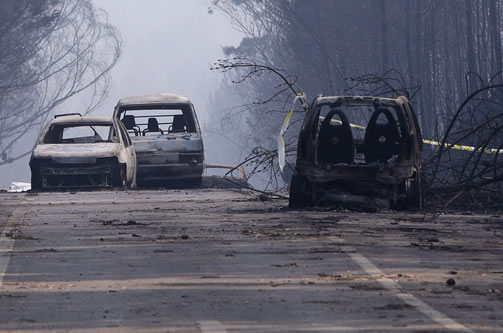 With thanks to Diário de Notícias

+1 #2 nogin the nog 2017-07-17 07:18
hmm.
The reality is, people were burnt to death in there vehicles due to receiving NO help from the GNR or
the emergency services. The present government has
a responsibility to fix these failings..
0 #1 Malcolm.H 2017-07-17 06:41
This routine of enforcing contracts that excuse the supplier of the service of any responsibility arising out of any failure of any kind to provide the service are commonplace in Portugal. They illustrate a total misconception of the purpose of supplying a 'guaranteed' service - that it needs more than InshAllah to work.

One of the more bizarre we witnessed was for a medium tension electricity transformer (that brings down the power to low tension for domestic use) whose contract twice specified in clauses that the signatories i.e. our neighbours were responsible for any claims without exception made against the specialist electrical engineer setting up the installation. Later - even the superior in EDP reading it choked with mirth.

Foreigners now look to your contracts .... check the small print. Are you too liable for your specialists incompetence ?
Refresh comments list