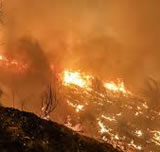 After more than a month, the list of names of those who died in the Pedrógão Grande fire has been released by the Attorney General.

Despite swirling rumours and deepening suspicion that there were more deaths than originally reported, the final figure remains at 64, with the proviso by the Attorney General’s office this this figure is to "the best of its knowledge."

One of the reasons given for the delay in publishing the list has been the time needed to question a witness who said the list was wrong and that more people had died in the blaze that started on June 17 and took a week to extinguish.

There was further confusion on Monday when the i newspaper published a list containing 73 names of those alleged to have perished in the tragedy.

This list had been compiled by a businesswoman but after analysis of this startling new information, the Attorney General said on Tuesday that there were mistakes and at least six of the victims' names had been entered twice.

The official statement is that the fire that broke out in Pedrógão Grande in the centre of Portugal on 17 June caused at least 64 deaths and 200 injuries.

The government immediately pledged all sorts of help and assistance to the victim’s families and those directly affected by the blaze but little of any practical value has been done and the promised psychological support has been absent, according the a survivors group.

The Social Democratic Party has lost little time in rounding on the Socialist government, stating today that it is pretty shameful that not a cent has been forwarded to help those families affected.

The PSD accused the Government of ‘unworthy attitudes’ over the arguments centred on the final death list and warned that "this case is not closed."

Carlos Abreu Amorim, vice chairman of the PSD, said it was “unworthy,” that the Government has postponed a key PSD bill until September which aims to introduce a special "urgent extrajudicial mechanism" to speed up compensation for the families of the dead and for those injured.

Amorim also criticised the delayed release of the list of the victims, claiming it was only due to pressure from the PDS and the media that the list has been published at all.

The PSD party, said Amorim, believes that there is no doubt that the State has failed badly in the aftermath of the fire and that someone from the Government at least "should have apologised" to the public.

With the list now published, telecoms supplier, MEO, can start to work out which of its customers is dead so as to avoid a PR disaster by sending out demands for payment.

The operator says it has been trying to get an official list of customers who died in the fires and that family members trying to cancel direct debits for deceased customers will not be charges the €140 cancellation fee.

One such case was described by a MEO spokesperson as “a lapse which already has been resolved,” and the company clarified that "MEO will not charge monthly fees nor penalties to customers who unfortunately died in the fires in Pedrogão."

The company also will not charge those "who saw their homes destroyed" in the fire and is altering its software to ensure that any customers whose homes have been destroyed will not get a bill for at least three months.

MEO has been trying to obtain "from the competent authorities an official list of its clients who lost their lives, who lost their homes or had them badly damaged" and from today should be able to do so.

It is hoped that water and energy supply companies also will adopt similar commercial sensitivity.

+3 #3 Neil M 2017-08-01 21:17
Daphne,
Please expand, so far it sounds like a best seller.
+3 #2 lizzie 2017-07-31 17:26
where is the list published.
0 #1 Daphne 2017-07-27 19:32
Good to hear that MEO have spotted that dead people and non-existent occupants of burnt out homes are not cheating the system. Not using their phones or phone lines. But Aguas de Portugal and EDP may be tougher nuts to crack. Take water - who is paying for the millions of litres poured onto these fires - if not some pro rata amount levied onto the relatives of these unfortunates? Eucalyptus may need several doses before being finally made safe.

So how do you double count a fire damaged corpse ? Why did the Portuguese media earlier refer to at least 88 corpses 'seen' in local funeral homes and a possible total up in 3 figures ? Is the Government's target keeping below a higher figure so Portugal avoids being googled as the 'worst ever firestorm dead'? Keeping its self-managed reputation as a well ordered country. Salazar would be justifiably proud of - and the EC can learn volumes from - this degree of news manipulation!
Refresh comments list