The controversial remodelling of Olhâo’s historic waterfront park and market area has been scheduled for October, after the summertime tourists have left.
According to a notice posted by the council, the Court of Auditors already has given its approval and Polis Litoral Ria Formosa has awarded the work, despite itself being closed down three years after its mandate should have ended.
The replacement of two parks and the constriction of traffic along the riverfront road could have started in April but, sensibly, "the Municipality negotiated with the various stakeholders so that the work starts in October, after the high season, so as not to harm merchants in the area, who receive many thousands of tourists up to the end of September," reads the communiqué.
The works is extensive. Conceived by the team at Amélia Santos architects, the 1960s Patrão Joaquim Lopes and Pescador Olhanense gardens are to be modernised in a move that certainly lacks universal approval, turning the area into a ‘modern multipurpose’ idea of what tourists want, rather than focussing on the historic appeal of the city.
Restricting the traffic flow along Avenida 5 de Outubro has led to uproar from the market traders who, in the absence of detailed plans, assume the worst will be imposed, restricting delivery space and parking.
The council, led by António Pina, says the city will be endowed with "a riverside front unique in the Algarve, modern but preserving the tradition, the values ​​and the soul of the Olhanense.”
The idea this modernisation has anything to do with ‘tradition, values and soul’ is countered by local blog, Olhâo Livre which points out that the iconic twin markets are classified buildings and work to, or near them must have the prior opinion of the Regional Directorate of Culture which, the blog suggests, has yet to be consulted.
The remodeling of the Patrão Joaquim Lopes gardens remains controversial as many locals remember fondly the laying out of the garden area in the 1960s and have watch trees mature into the shady haven it now brings.
The public consultation process was met with criticism that has not been addressed and the opposition’s view to this significant reworking of one of Olhâo’s main features is that it will serve to homogenise the city’s riverfront area, rather than it exemplifying any tradition, values or soul.
Local tradesmen and restaurateurs remain in the dark as to the new road system, the one way traffic idea receiving the harshest criticism in the public consultation, followed by a reduction in parking.
“Just thinking about tourism and forgetting the rest can be fatal to downtown Olhão, and the truth is that you only see people on sunny days or in summer, but the year is twelve months old,” concludes Olhâo Livre.
The mayor plans for the historic centre of the city involved machine cut paving replacing historic cobbled streets and the erection of a huge viewing tower in place of vernacular buildings.
This bizarre and poorly thought out plan, proposed by a firm of Lisbon architects, did not happen due to an uproar and a petition led by foreign residents and house owners and swiftly boosted by locals.
The market and garden areas are equally important and their alleged improvement will go ahead, whatever people may think or say - such is the power of the council mayor whose ideas of development invariably involves modernisation rather than an appreciation of what exists and what it is that visitors come here to see and experience.
The cost of the work is budgeted at around €1.5 million - €900,000 payable by Polis Litoral Ria Formosa and €600,000 by Olhão’s ratepayers.
Have a look at this run through of the new plan on YouTube - comments welcome: https://youtu.be/EFg2Xbv3QEc
See also 'Olhâo's riverside gardens to be torn up'
and
Olhão's riverfront in complete redesign 'to attract more tourists' 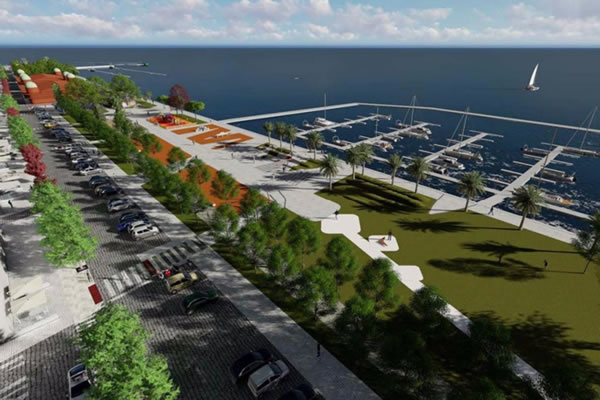