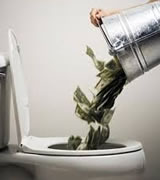 CDS-PP Vice-President, Cecília Meireles, said that "the problem with the Novo Banco sale, negotiated by the current Government, is that a blanket public guarantee was being negotiated."
The CDS-PP stated  today that the government's assurances that the sale of Novo Banco would have "no impact on the public accounts or on taxpayers" were "not true" as can be seen by the fallout after yesterday’s announcement of a €1.4 billion loss at the now privately owned bank.
"As the CDS warned at the time, the big problem with the sale negotiated by the current government is that it was negotiating a covert public guarantee," said Mierles, adding that the party’s warnings have become "unfortunately reality and the taxpayers will be called upon to make up the losses."

Cecília Meireles, who has a degree in Business Administration, said that the European Commission had warned about the management of the Novo Banco and the CDS-PP had requested parliamentary hearings with the Finance Minister and the governor of the Bank of Portugal, Carlos Costa, who controlled the bank.
"At the moment, Novo Banco is a private bank but taxpayers are called upon to cover losses because the current government decided to negotiate a sale with a public guarantee after it said in parliament that there would be no public guarantee, nor impact on public accounts or on taxpayers," said Meireles.
The politician said that if this public guarantee had appeared early in the sale process, other interested parties might have put in higher bids (than the zero euros Lone Star paiod for the bank's shares.

Yesterday’s announcement that Novo Banco lost €1,4 billion in 2017, due to impairments for non-performing loans and poor trading generally, was not wholly unexpected, coming after a  €788.3 million loss in 2016.
The Treasury now has to borrow €450 million from taxpayers to hand over the Resolution Fund, which still owns 25% of Novo Banco, a shore up the bank’s capital position. The remainder of the €792 million required will come from Resolution Fund reserves, already supplied by Portugal’s other banks.
The ‘contingent capital mechanism’ was created when negotiating the sale of Novo Banco to US vulture fund, Lone Star, and means Portugal’s taxpayers are on the hook for up to €3.89 billion if Novo Banco continues to report losses, which is likely as Lone Star prepares the bank for sale, possible in 30 months time.
Novo Banco was created in August 2014 by the governor of the Bank of Portugal Carlos ‘Mr Magoo’ Costa and was meant to hold only the good assets of the collapsed BES.
Lone Star was handed 75% of the bank in October 2017, while undertaking to supply €1 billion in funds. The Resolution Fund holds the remaining 25%, neatly ensuring taxpayers will have to continue to support the bank that already has cost €5 billion to keep afloat.
Tweet

-2 #2 mj1 2018-03-30 09:42
indeed Richard you are right, when ever did you see one of these MEPs hold a meeting for people to discuss things, or for that matter who is or are the representatives for the Algarve who sit in Parliament..when ever did you see them to meet them
+2 #1 Richard 2 2018-03-29 22:18
One of the big problems in Portuguese politics is that there is essentially no representation for the center-right or for the right. The political spectrum is comprised of the extreme left, the left, or the center-left. As a result, there is little if any fiscal responsibility or accountability.

In most democratic countries, excesses under one party or coalition are eventually reversed when governance alternates. In Portugal, no conservative party has yet to prove viable. Statements by CDU-PP leadership may be interesting but will carry no impact.
Refresh comments list