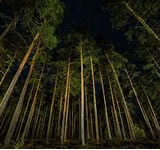 The fire that broke out last October in the famous and much loved Pinhal de Leiria forest was planned a month in advance, according to a report by TVI 24.
Involved in planning the blaze were owners of at least four of the largest timber companies in the region and owners of the factories that buy and sell lumber.
This unholy alliance met in secret to agree on the details and the resulting price of the timber.
The trees, when burned, can be bought up at a discounted rate as the State is obliged almost to give away the timber.
Special incendiary devices were used in the arson attack, according to journalist, Ana Leal from TVI 24, whose report will be a severe embarrassment to the Leiria police who, as late as January 2018, confirmed that the two fires on October 15th, 2017 were set deliberately but has failed to make arrests.
The fires destroyed more than 80% of the Pinhal do Leiria forest, on what is considered as the worst day of 2017 for fires with firefighters already stretched to the limit. The fires of October 2017 killed 49 and injured 70, destroying nearly 1,500 houses.
TVI 24 states that details of the Pinhal de Leiria fire were planned and prices were decided for timber at a secret meeting in the basement of a restaurant. As if this was not bad enough, on the day the forest fire was set, the chances of it being put out by exhausted Bombeiros crews were at an all time low.
Ana Leal's source said that "if this gets out, I will get shot in the head."
As one blogger on dn.pt commented,
We all know that most of the fires have always been a business in Portugal, whether from the lumber sector, aircraft owners and companies that buy timber at derisory prices after the fires. Only those who do not want to see this do not believe it. Why is it only now that we are discussing using the air force and the army in protecting and fighting fires?"
Tweet

That surely leaves one speechless! Very painful to read and see that some newspapers (like Público) avoid to write about it. Ana Leal is courageous. I hope there will be some action.

We can also sympathise with Amanda's rightly-emotional reaction.
May we pray for the safety of those who brought this to the attention of community-minded media.
Is there still hope for ethical business, banking and political practices?

+3 #3 Amanda Walker 2018-04-16 09:47
The owners of these timber companies should b shot, or better still, burned alive in their fires! This might stop any further attempts to create fires of this kind.
+4 #2 Dennis.P 2018-04-15 15:59
It is a well known fact and repeatedly pointed out here: fire damaged wood is bought at a substantially discounted rate when sold on to the lumber extractors, who have the specialist gear to work it. But each tree is obviously still at near enough its full weight for weighing at the pulp mills. The landowner isn't too bothered as they can re-plant with Brussels grants, or if sufficiently heavy get development permission. So build on the land. When will this scam ever end?
+11 #1 Maximillian 2018-04-14 15:45
That surely leaves one speechless! Very painful to read and see that some newspapers (like Público) avoid to write about it. Ana Leal is courageous. I hope there will be some action.
Refresh comments list