Pintadinho beach, near Ferragudo has been a local favourite for generations of sun and sand lovers. The single access road leads down to a large sandy car parking area with a beach bar restaurant for snacks and drinks.
This is about to change as a local developer is building a new restaurant and car park 'for patrons only,' severely restricting public access to an area to be rebranded, ‘Edd’s Beach.’
Groundworks already are well advanced and diggers have started removing a significant section of the headland, designated as REN, or ‘ecological’ land.
Shocked locals have pointed out that this ecological land cannot be touched, let alone dug up to create a car park and restaurant, the general public will have no alternative car parking area if they want to access the beach, prior notice of this project was not publically announced and that the extent of the removal of ecological land bears no relation to the description of the project as finally shown on a board that appeared weeks after the diggers started.
Polite enquiries at the local council have been met with zero cooperation, no surprises there, but the project was approved by Lagoa Council on August 16th last year and allows a 90.6m2 covered area for the restaurant and surrounding construction of 259.3 m2. The Building is intended for ‘Equip. Coletivo’ and work will be finished by February 22nd 2019.
This private zone will be called Edd’s Beach, after the local developer Edwin Opstelten, of Orange Sky in Carvoeiro who, at the time of publication, had yet to answer a question about the parking restrictions envisaged for his Edd's Beach development.
From the site plan it appears that most, or all, the previous public parking area will become private parking for 50 cars and a road to the new restaurant, bar, swimming pool and terrace for seating and sun beds. 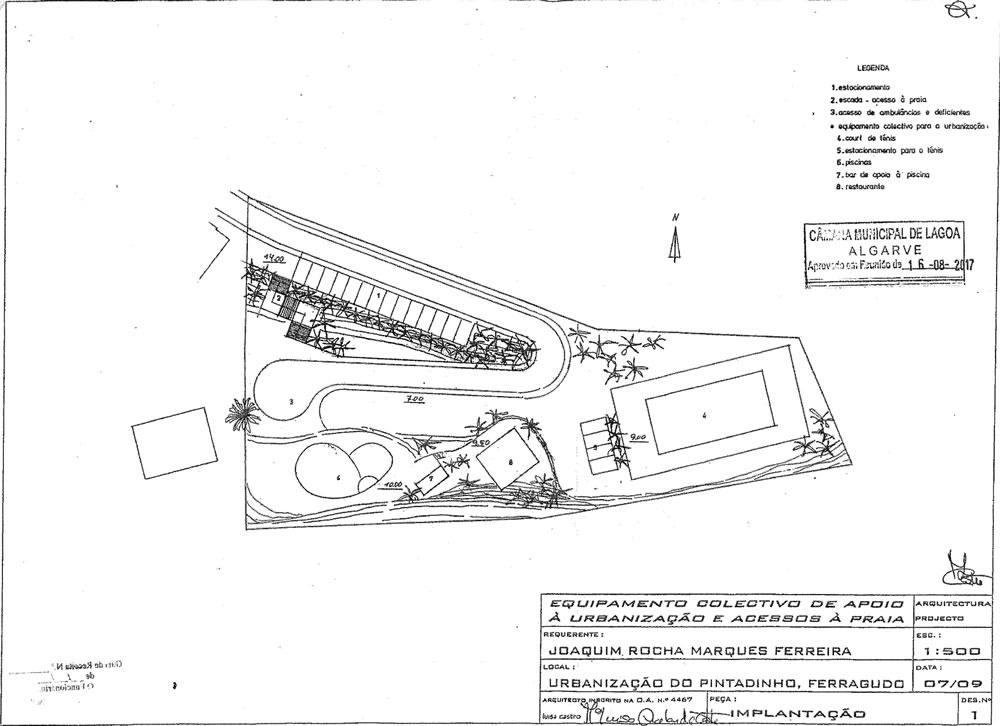 The wider plans show that the road down to the beach will accommodate 14 parking spaces which are for public use - beachgoers, including mothers with prams and the less able elderly, then negotiating a steep set of steps.
In the past, summertime parking on this access road has led to the intervention of police as the road becomes blocked when the lower car park is full, making it impossible for emergency service vehicles to get to the beach should there be an incident. This situation will get worse not better when the lower car park is annexed for private use of Edd’s Beach patrons and beachgoers park on the access road when the 14 allocated spaces are filled.
According to the Conditions of the Regional Coastal Plan (POOC) and the Local Development Plan (PDM), the area should be covered by three categories of protection: Natural Areas of Arribas (cliffs), National Ecological Reserve and Public Maritime Domain, which makes incomprehensible that any construction work was licensed in that location by Lagoa Council.
The President of Ferragudo Parish Council admitted he was aware of the process, “which has been going on for 30 years and was considered as OK by the CCDR-Algarve, the Algarve Environment Agency and the Algarve Hydrographical Management Board.”
Whatever the long history of this site and whatever the council now has authorised, it is unlikely to include the destruction of ecological land and the de facto annexing of the popular beach parking area for the exclusive use of the Edd’s Bar clientele.
Almargem pointed out that the Regional Coastal Plan (POOC) Burgau-Vilamoura is still in use but for unknown reasons does not include Pintadinho Beach so there is no Beach Plan but it does show the zone in question is in an ecological area. In the proposed POOC for Odeceixe-Vilamoura, which has not yet been approved so no work can be authorised under its terms, there is a Beach Plan but the only thing shown is the relocation of the restaurant, parking on the access road and the demolition of the old unfinished building half-way down the access road.
Part of the region’s tourist appeal is the promise of ample space for relaxing beach holidays. The restrictions being imposed by a private entity, however well-meaning, is contrary to the principles of open access to the nation’s beaches which are for the enjoyment of all.
Interestingly, the new name is not Edd’s Restaurant, it is Edd’s Beach indicating that restricted 'customers only' parking will enable Edd's Bar clients to enjoy an almost private beach area - maybe this is the plan. If so, it is unlikely to succeed but not until after a significant area of ecological land has been removed.
For a video describing the illegalities at the Edd's beach project, click HERE
Pictures below: 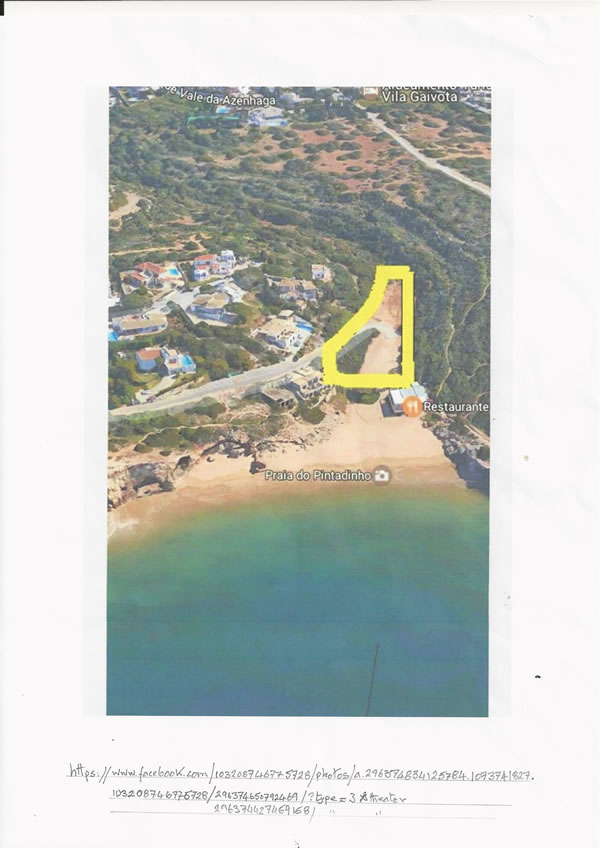 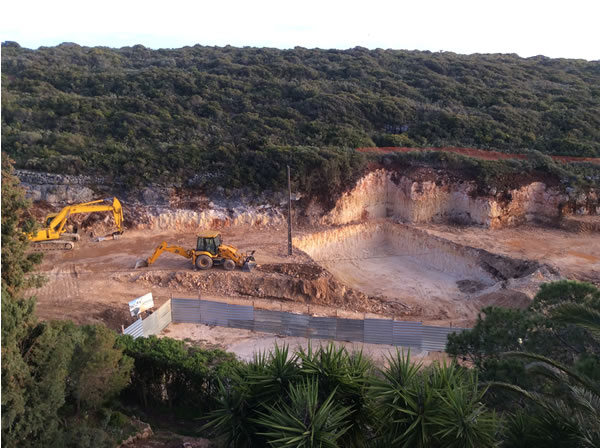 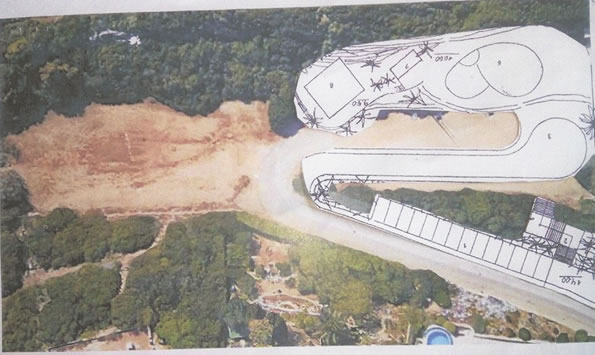 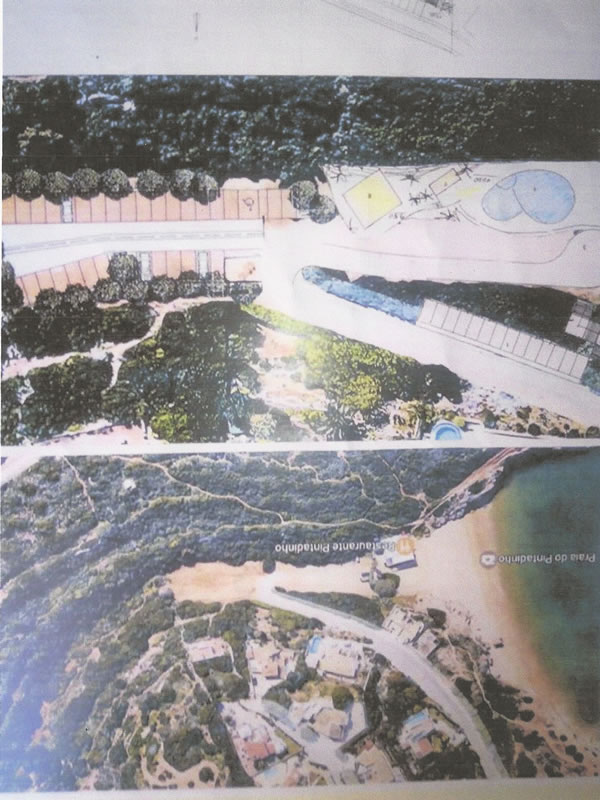 The hole shown in the picture below, ostensibly for the restaurant foundations, is approx. 169 m2. The approved project allows for 90.6 m2.
The depth is on average 4 metres, enough to accommodate one floor below ground level, when the approved project is only for one storey above ground. 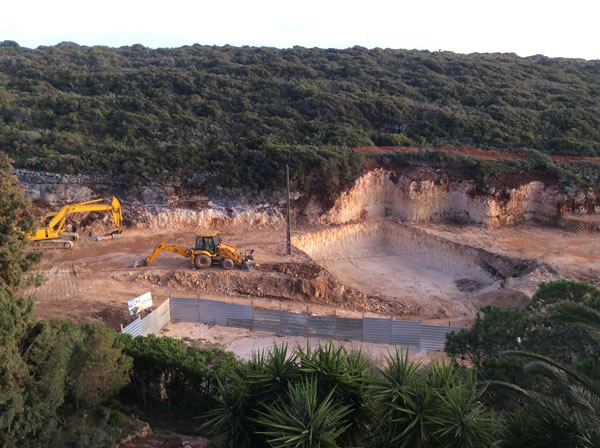 We want more concrete, more loud music, more colourful umbrellas, less noisy children, more Brighton, more Southern Spain. And, in case you mistook his motives for ripping away acres of protected ecological landscape, don’t forget EDD is “INSPIRED BY NATURE”. EDD has helpfully erected a sign on the site to remind us of this. And, as a bonus, the sign tells us EDD is “THE SOURCE OF YOUR PORTUGUESE LIFESTYLE -CLASS A”!
+15 #17 Blu3fin Tuna 2018-04-16 16:59
Absolutely disgusting abuse of power and disfigurement of the Algarve's unique and beautiful coastline. Couple this with the demolition of 10 other cliff sites, noted also by Algarve Daily News, on preposterous safety grounds in a one year. Shortly there'll be nothing of the Algarve that brought us all here in the first place to enjoy. Just the greedy, gaudy projects of shameless men. Have the residents of the region no recourse at all in these matters? What can be done?
+19 #16 Stuart Greenwood 2018-04-15 19:04
What 'mess' are you referring to ? Please tell us.
My family and I have been using this delightful little beach since the early eighties and know that the owners of the beach bar / restaurant always really appreciated our customespecially in the 'off season '. My gripe is not the fact that it is going upmarket but purely on the environmental issues, attempts at privatisation and possible planning discrepancies.
Will the elderly and infirm have access to all facilities including the beach without having to use the steep steps ?
If the Camra can allow this, why have they not authorised the total removal of the only real eyesore, the partly constructed dwellings that have been blighting Pintadinha for decades !
+23 #15 Jack Reacher 2018-04-15 12:30
Quoting Mrs Positivo:

Finally we get some great trendy places in the algarve. Let’s hope this will be an improvement for the area.

I hear Albufeira was once a quaint fishing village. Whatever the town is now is hardly an improvement. The Algarve certainly isn't trendy yet more aligned with beer swilling lager louts and handbag bashing wenches.
+30 #14 Stuart Greenwood 2018-04-15 12:02
This is an absolute disgrace and must be investigated at the very highest level !
+26 #13 Stuart Greenwood 2018-04-15 12:00
This is an absolute disgrace and the entire planning process should be fully investigated at the very highest levels.
The proposed creation of a developers dream to create what amounts to be a very select 'semi- private beach club / restaurant' on what was a beautiful and typical Algarvian .
How has it been possible to allow the destruction of this natural area ? I honestly thought that this type of carnage was a thing of the past and I wonder which beach will be next to go 'private ' !
+25 #12 Desdemona 2018-04-15 11:53
Quoting Mrs Robinson:

I don’t get why everyone is reacting so negative .. finally someone is cleaning the mess over there!

Installing a private car park may clean up 'the mess' whatever that is, but creates many access problems to a public beach. 14 public car parking spaces and a steep set of steps does not exactly encourage tourism.
+25 #11 TerryP 2018-04-15 11:48
Quoting Mrs Positivo:

Finally we get some great trendy places in the algarve. Let’s hope this will be an improvement for the area.

Not sure anyone is complaining about having an upgraded beach bar facility. What they are complaining about it 1. destruction of REN land, 2. preventing access to Pintadinho beach for the public, 3. the Edd Beach development seems to be a sort of 'members only' set up not available to the great unwashed so getting a drink of pop or an ice cream for a tired and thirsty child may need a trip to Ferragudo as, I presume, the existing beach bar conveniently is being removed by the State to enable a private club.