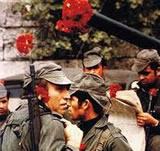 It has suited politicians throughout the decades to declare Portugal's 1974 revolution 'bloodless' with happy soldiers walking around with carnations stuck in their rifle barrels and a general feeling or relief and bonhomie across the land.
One part of this rose-tinted view of history is incorrect -  the revolution was not 'bloodless' as four members of the public died after being shot from the roof of the DGS building in Lisbon's Rua António Maria Cardoso on the afternoon of April 25th, 1974.
The Direção-Geral de Segurança, (DGS) was Portugal’s much feared political police force, responsible for the brutal repression of political opponents to Salazar’s Estado Novo regime and whose members operated without judicial control.
Six years after the death of these four men, a group of citizens paid for a plaque to be carved and erected, in memoriam.
This 1980 plaque named the men that were killed when unidentified agents, desperate after being surrounded by rebellious troops and a throng of civilians, opened fire from the top of the building. Four demonstrators were killed - the only blood that was shed during the so-called ‘bloodless revolution.'
The former headquarters of the Estado Novo political police later was transformed into luxury apartments and the plaque was taken down. It was put up again in 2009, but in a discrete area so as not to attract attention or deter buyers.
Later, the plaque again was removed but the Left Bloc MP, Catharina Martins, campaigned vehemently to have it replaced. Catarina Martins' great-uncle has been murdered by agents of the PVDE (State Surveillance and Defence Police) in July 1942.
On April 22nd, 2014, Lisbon council remounted the plaque to its rightful place on the facade of the former DGS headquarters. 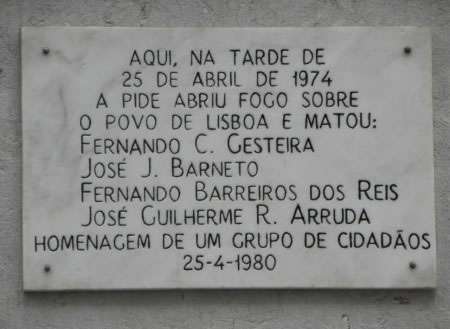 The inscription can be translated as reading,
Here, on the afternoon of
April 25, 1974
PIDE opened fire
on the people of Lisbon and killed:
Fernando Gesteira
José Barneto
Fernando Barreiros dos Reis
José Guilherme Arruda.
In homage from a group oif citizens
25-04-1980
The building was formerly known as the Paço dos Duques and had been noted for the parties held there. It is this aspect of the building’s history which the owner wished to highlight while trying quietly to remove the reminder of the State's violent repression, torture and murder of its citizens.
A DGS agent may have been killed by rebellious troops while trying to escape from the building, but details of this alleged event remain shrouded in mystery and it may not have happened.
What was the PIDE?

The PIDE or International and State Defense Police (Portuguese: Polícia Internacional e de Defesa do Estado) was a Portuguese security agency that existed during the Estado Novo regime of António de Oliveira Salazar. Formally, the main roles of the PIDE were the border, immigration and emigration control and internal and external State security. However, it became more known by its political police activities.

The agency that would later become the PIDE was established by the Decree-Law 22992 of August 1933, as the Surveillance and State Defense Police or PVDE. It resulted from the merger of two former agencies, the Portuguese International Police and the Political and Social Defense Police. The PVDE was transformed into the PIDE in 1945. PIDE was itself transformed into the Directorate-General of Security or DGS in 1968. After the 25 April 1974 Carnation Revolution, DGS was disbanded in Portugal, but continued to exist transitionally in the Portuguese overseas territories as the Military Information Police or PIM, being finally completely disbanded in 1975.

Although the acronym PIDE was only formally used from 1945 to 1969, the set of successive secret polices that existed during the 40 years of the Estado Novo regime are commonly referred to as the PIDE. Historically, this set of police agencies is also often referred as PIDE/DGS, from the acronyms of its two last designations. It is referred in this last way in article 293 of the Portuguese Constitution, which states the criminalisation and judgment of its former officers.

During its existence, the organisation was known for its actions during the Spanish Civil War, its role as a political police, its counter-espionage activities during World War II and its counter-insurgency operations in the Portuguese Colonial War.

How did people know there was a revolution?

This is a translation of the radio announcement on April 25th, 1974:

"The Portuguese Armed Forces appeal to all the inhabitants of Lisbon to stay at home and to remain as calm as possible. We sincerely hope that the seriousness of the hour will not be saddened by personal injuries.

"We therefore appeal to the good sense of all military commanders to avoid any confrontation with the Armed Forces. Apart from being unnecessary, such action would only create or aggravate serious divisions between Portuguese people, which must be avoided at all costs. It is because of our concern to spare Portuguese blood that we are appealing for a civic spirit.

"All medical personnel, especially those in hospitals, should hold themselves ready to give help, though it is hoped this will not be needed. To all political and military forces, the Command advises maximum caution to avoid any action which may be dangerous. It is not our intention to shed blood unnecessarily, but if we meet provocation we shall deal with it.

"Go back to your quarters, and wait for orders which will be given by the Movement of the Armed Forces. Commanders will be held responsible for any attempt, in any form whatsoever, to lead their sub-ordinates into conflict with the Armed Forces.

"We appeal to the forces of the GNR (National Guard) and PSP (Riot Police) - and even to the DGS (Political Police) and Portuguese Legion - who may have been recruited under false pretences to remember their civic duty of maintaining public order. In the present situation this can only be achieved if there is no reaction against the Armed Forces Attention, all military and police units.

"Since the Armed Forces have decided to take your place in the present situation any opposition to the troops which surround the city will be dealt with drastically. By not obeying this advice you could provoke a senseless blood-bath, whose responsibility will be yours alone."

My main source for the information which I show is the 2nd Edition of Operação Fim-Regime by Visão História, published in April this year. The particular article in question is by Paulo Chitas, O último bastião pp 80-83.

Perhaps Mr Darcy can show how he is so certain that the PORTUGUESE MILITARY did not FIRE A SINGLE
SHOT. What is his reason for this assertion, which he cites as fact?

Perhaps Mr Darcy can show how he is so certain that the PORTUGUESE MILITARY did not FIRE A SINGLE SHOT. What is his reason for this assertion, which he cites as fact?
-1 #23 Darcy 2019-04-28 12:11
The revolutionaries DID NOT fire one single shot, this is fact.
Although, according to Mr booker, he has "sources" that "may" suggest something different.
0 #22 Peter Booker 2019-04-27 09:05
"But the PORTUGUESE MILITARY who instigated the Carnation Revolution did not FIRE A SINGLE SHOT from their weapons and thus rendered the Carnations Revolution one of the world's most peaceful revolutions," writes Darcy.

This statement may not be not entirely true. There was one casualty among the PIDE, António Lage, a messenger aged 32, who was being searched by the soldiers after the PIDE HQ had been captured. He tried to make his escape, and he died. My sources are not explicit in how this death occurred.

yes they are
+1 #20 Darren 2019-04-25 15:37
PIDE needs far more openness about it's activities particularly as talk of it being disbanded from 1974 was, as history is written by the winners, also an invention. It became renamed and for safe keeping much of its records were squirrelled away, most recently we hear, much to the Russian KGB. But a salutary tale was told a group of us British by a Lisbon PT about his struggle to buy an abandoned ruin in Lisbon. The owners taken away secretly in a purge by PIDE several decades before and the house then vandalised. Apparently when you were 'disappeared' you not only ceased to exist but you never existed; likewise all records such as property you owned destroyed.
The first hurdle being that the Conservatoria / Land Registry needed the previous owners details. Which meant trawling round the neighbourhood asking elderlies if they had any memory of the owners; apparently both teachers with young children who had recently arrived in the area. This guy commenting on the fear and distrust still held today, particularly as he needed to get 3 of them to be witnesses and even now these old boys and girls did not want "any trouble"! This fear of secret police can still be seen today in not officially sanctioned public events like the recent climate change protest we saw on Lisbon Streets on TV the other night. A dozen or so obvious protesters with passers by hurrying past; perhaps twice that number of plains clothes police (?) unintentionally filmed when the camera zoomed out!
0 #19 Darcy 2019-04-25 13:36
Mr ed,
Please examine the dates on the comments, as the majority of them belong a report on 25th Abril commemoration from "2018".
This is 25th Abril 2019 ........
+2 #18 Daphne 2019-04-25 08:17
Particularly striking that this discussion is happening 45 years after the event but in an English not Portuguese language newspaper. With hardline Republicans still wanting to keep us foreigners in the dark about this non-Revolution and so much else like Pink Mapping, 1890 Ultumatums and the increasingly well known anthem chorus - Save our Country, attack the British!
But we have still not reached sufficient evolution to factor in an educated discussion of the symbols hijacked by those organising this, the World's First Non-Revolution. Managed by the very people most revolutions attempt to overturn so insisting on the retention of Penal laws such as Defamation that intentionally keep the Portuguese Judicial and Policing system heavily weighted against anyone complaining - 30 years after entering the EU which gives the Right to complain - and therefore be a 'nuisance. As symbols - remind ourselves that the chosen date itself is unquestionably connected to the original Italian unification, the Risorgimento, and the later post WW2 overthrow of fascism in Italy; both celebrated on 25th April in Italy and stuffing flowers into gun barrels which gave us the very name Carnation Revolution was first notably seen 1968 in an anti-war protest at Kent State University in the US. Perhaps ADN readers can supply their own examples of other hijacked 1974 symbols.
+3 #17 JamesAlgarve 2019-04-25 08:04
I think that history should never be airbrushed.
Then the people will always remember the truth about the past and hopefully will stop history repeating itself.
123
Refresh comments list