Today was Children’s Day, noted in the Algarve by a visit from the smiley PM who started his tour by hugging trees with a thousands of green T-shirted kids, ‘in defence of the forest’ at the 'Um Abraço Verde' event in Duarte Pacheco park in Loulé.

Next, Costa was off to the Monchique hills, one of the fire risk areas for the coming summer, saying to assembled firefighters and journalists that the country has pulled out all the stops to make the forests safe in the nationwide scrub cleaning exercise.

The firefighters, a forestry brigade which has been working for a year, has not yet been paid as the Government has withheld funds due to the Association of Forest Owners of the Eastern Algarve. The bill so far is €40,000 which the Council in Monchique has been helping to subsidise.

Costa was asked by journalists, how could he explain his tree hugging when at the same time allowing oil and gas exploration off the Aljezur coast, especially without the safeguard, however flimsy, of an environmental impact study.

Costa stuck to the well rehearsed mantra now adopted by key ministers, that if oil is to be drilled, only then does there have to be an environmental impact study.

On May 16, on the last day of the deadline, the Portuguese Environment Agency exempted Galp-ENI from an environmental impact study for its test well off Aljezur.

The Agency president, Nuno Lacasta, justified his decision by stating that "no significant negative impacts" had been identified for the drilling of the well.

Another ruse employed by the PM, was the old ‘saving on oil imports’ ploy whereby the government continues to dupe much of the public into to imagining that extracting oil from Portuguese territory somehow will improve the nation economy, which it won’t as Galp-ENI will sell any oil shipped to Portugal at the international price per barrel.

Costa said today that "the least we can do is find out whether we have resources or not," making it sound like the oil somehow belongs to the State when in fact it has been signed away in sloppily negotiated concession agreements that leave oil companies well set up and the nation facing environmental costs from production and spillage.

The use today of smiley, green-clad, happy children to help paint a green gloss over the government’s pro-oil agenda, marks a new low for an administration that continues to evade the truth, to deny the consequences and block open debate on oil and gas exploration. 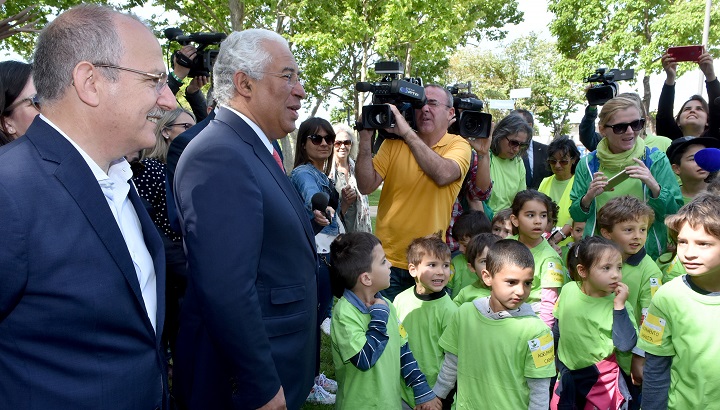 What is the betting that the politicians and government beuracrats involved in these corrupt actions or possibly members of their families, at some time in the future end up as "consultants" or some similar highly paid non-job within the oil companies being given these permissions ?

Hmm
NO Government gives oil contracts away . All you have to do is Follow the money. At some point dodgy deals have to be rewarded

-1 #6 Cicero 2018-06-03 08:09
I wonder if Costa will have a Rajoy moment sometime in the future when he tells everyone that he knew nothing about the "donations", "favours", "contributions", to his party, family and friends from the people and companies who will profit from this blatantly corrupt venture he is involved in.
-1 #5 Cynical Man 2018-06-03 07:48
What is the betting that the politicians and government beuracrats involved in these corrupt actions or possibly members of their families, at some time in the future end up as "consultants" or some similar highly paid non-job within the oil companies being given these permissions ?

+7 #4 Raif 2018-06-02 13:02
When that political pygmy Costa told the assembled firefighters in Monchique that the government was pulling out all the stops to reduce the fire hazards in the country, they should have all stepped forward with their hands out and told him that actually ensuring that they got paid for risking their lives would be a good way for him to start.
-2 #3 nogin the nog 2018-06-02 11:47
hmm
This mans time is numbered . Just like his Spanish Counterpart Mr Rajoy.