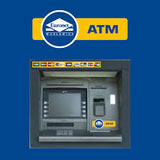 Portugal’s ATM network is being replaced, little by little, with new Euronet machines which charge high fees and commissions without informing customers what is going on.

These foreign interlopers are springing up across the country and now can be found in most high footfall tourist areas.

While normal ATMs do not charge customers who take out money, the machines from Euronet Worldwide charge for withdrawals.

The consumer is not warned of the cost and is given no clue at all that a fee has been charged. Unsurprisingly, this issue already has led to a number of complaints filed in the Complaint Portal but the company operates from the US, so good luck with that...

Portugal’s traditional ATMs, managed by SIBS, are being replaced by this insidious foreign network whose machines are programmed to treat a cash withdrawal by debit card as if it was a cash advances using a credit card – and then to charge a stiff fee.

This is because a Euronet Worldwide machine assumes everyone is making withdrawals from outside their own country, so it can charge fees without warning.

"For those who use the same card for both credit and debit functions, it is never a good idea to do ATM withdrawals from a foreign network because it is subject to payment of commissions for 'cash advance', that is, you are raising money from the credit limit which is charged for on any network because it is an operation subject to interest rates and commissions and which, as a rule, includes a fixed amount per transaction and a percentage over the amount raised. This does not happen if you go to an establishment because, in this case, the merchant asks if you want to pay with the credit or debit function,” reveals an insider.

Not all consumers are aware of the deliberate ruse and the resulting fees, until later on when they notice they have been stiffed.

According to a SOL news report, a customer withdrawing €200 from a Euronet Worldwide cash machine will be charged €15 for the privilege. A €50 withdrawal will cost €6.24 and a commission of €3.95 is paid on a €20 withdrawal.

“Cash withdrawals made in ATMs located in Portugal are subject to the same regulatory framework regardless of the network to which they belong: ATM, ATM Express or Euronet,” stated the Bank of Portugal which later admitted that none of these fancy laws cover the charging of commissions for carrying out cash withdrawals with a credit card.

Still, the regulator says that "cash advance commissions must be previously disclosed to each bank client by the institution granting the credit, in particular through price lists, allowing the cardholder to know in advance the amounts that may be charged to him for that card.”

This is not happening and the Bank of Portugal will have known about this problem since May 2015 when the first Euronet machines began to appear in Lisbon, Porto and the Algarve, all tourist hotspots where the machines do not allow withdrawals of less than €20.

There is a gap in the market for well-positioned ATMs as many sites became empty during the austerity years due to bank closures. Euronet has been bagging the best locations, it can afford to due to its eye-watering charges, mostly paid by foreign visitors who withdrew €1.9 billion last year plus fees and at appalling exchange rates in from outside the Eurozone.

Euronet is operated from Leawood in Kansas when Dan Henry and Michael J. Brown oversees 5,600 employees intent on providing a deliberately confusing and financially punishing service.

Advice to consumers, do not insert card. Even hitting 'decline conversion rate' will trigger a transaction, these machines are programmed to decieve

12
-1 #17 kevino 2019-09-20 09:07
I have a double complaint about Euronet ATM during the time I was in Romania 2 weeks ago.
1. I tried to withdraw 1000 lei which is roughly 210 euros. They charged 243 euros for that! That's right, we speak about 15% commissions for exchange rate! The ATM just behind was charging 212 euros...
2. When I tried to withdraw money, the ATM had an issue and I got a receipt "DISPENSER ERROR OCCURRED ATM COULD NOT DISPENSE MONEY YOU HAVE NOT BEEN CHARGED". Guess what? I was charged the 243 euros! It's now 10 days and the money didn't came back on my account!

Conclusion, try your luck in any ATM which is not Euronet ATM.

I’ve never been charged a cent for withdrawing from these machines using a Novo Banco multibanco card so this needs to be clarified as probably only applies to foreign cards and is not particularly unusual. Cash machines in Tavira Gran Plaza have a similar offering. I see that some vigilante has take to printing out the ADN report and sticking it next to Euronet machines in the East warning people away. Only in English of course!

I use a Euro-denominated Visa debit card and my bank does not charge for cash withdrawals. I have never been charged a cent for withdrawing money at these machines.
NOTE: My card is Visa Debit. I can only withdraw what is in my account, which is already in Euros, and I never have the option of requesting a cash advance. So, no chance of the ATM to unsuspectingly requesting credit advance for me.
+2 #12 Mary Rofe 2019-03-20 09:35

we used this machine in Rome and the exchange rate gave us less than the current exchange. The current rate is 1 eur to 1.6 aud......the machine delivered .5 eur to 1 aud.
+1 #11 Oleg 2018-12-04 13:22
I’ll tell you what. I came across this atm today at Konstanz, Germany. I tried to used it as usual, but what attracted my attention was when I tried to withdraw euros it insisted to make a conversion from dollars. And the conversion rate was at least 10 percent higher than average market rate. So though it stated everywhere during the withdrawal process that the fee is zero, it is actually a lie because they just proceeding it as a conversion with an extremely high rate.
So be warned and AVOID!
+2 #10 Jonny 2018-07-26 22:09
I’ve never been charged a cent for withdrawing from these machines using a Novo Banco multibanco card so this needs to be clarified as probably only applies to foreign cards and is not particularly unusual. Cash machines in Tavira Gran Plaza have a similar offering. I see that some vigilante has take to printing out the ADN report and sticking it next to Euronet machines in the East warning people away. Only in English of course!
+1 #9 Peter Booker 2018-07-24 08:05
Responding to Betty Jones.

I asked this question in our bank (Millenium), and received a reply which sounds strange to me. The official I asked had to consult his colleague, so clearly he didn´t know either.

The choice applies only to cards which may be both credit and debit cards; the user of such cards may then select either the debit or credit option. If your card is debit only, then it makes no difference what option you choose.
+3 #8 David O 2018-07-23 15:15
Thanks for this. I’ve put a condensed version of your article on a local machine, along with directions to the nearest proper ATMs.
12
Refresh comments list