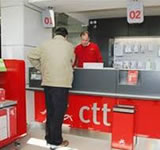 The Communist Party and Left Bloc want to nationalise Portugal’s Post Office, CTT, the future of which is to be debated on February 20th in a key parliamentary debate.

The nationalisation of CTT means triggering an existing law that can be used to take control of the business ‘in the national interest.’

The business has been in private hands since 2014, and has a concession agreement to run the mail service until December 2020.

The new management have reduced a once profitable business to one that makes marginal profits yet still pays healthy dividends by selling off property assets.

Two proposals will be debated in February with the Left bloc pushing for action during this government, not delaying matters until 2020 when the contract runs out – the route preferred by the prime minister.

The nationalisation of CTT should be done, "in accordance with the Legal Regime of Public Entitlement, approved in the annex by law 62-A / 2008, of November 11, in order to safeguard the national public interest," reads the proposal.

Nationalisation can be by using this decree-law or the state can start buying shares until it controls the business.

If the business is taken back under state control, the European Commission's Directorate-General for Competition needs to give approval if ‘state aid’ is seen to be involved.

The toothless regulator, Anacom, pointed out that the 2018 closures of CTT branches, "has led to the increase of 33 municipalities in Portugal that no longer have a post office."

The fight continues in Carvoeiro, Sagres, Praia da Luz and Aljezur to prevent the planned closure of their Post Offices, viewed by locals as offering essential community services.

The Douro Intermunicipal Community also has filed an injunction against the closure of branches in the region.

+1 #2 Peter Booker 2019-02-11 09:23
"European Commission's Directorate-General for Competition" Is there really a competitor for this unprofitable business?

The current owners will be happy with the Prime Minister´s support. I suspect they wish to asset strip valuable property, and then to make an exit in 2020, when they have had the cream. Does Costa have friends in this company?
0 #1 Elsa 2019-02-10 17:10
Common sense thinking in Portugal should lead towards a solution that the enemy put in place some 25 years ago. In the UK adapting convenience and CTN stores and even pubs to run post office counters at specified times. This move also opening them up to ungodly times like evenings and weekends. But would the relevant Portuguese Unions with their routines and superb early retirement packages buy into this?
Refresh comments list