Portugal enters pandemic mitigation phase tonight at midnight. What does this mean?

The number of fatalities in the last 24 hours (ten more people compared to yesterday) consists of patients over 70 years old, asserting that "lethality is higher in the elderly". Graça Freitas, Director-General of Health, says that the country will enter the new stage of their plan starting at midnight, which will move from containment to mitigation. "There may be turbulence", says the director-general, but she guarantees at the same time that health authorities will be ready to deal with any sudden changes.

But what is the “mitigation phase” and what levels of alert and response are there? 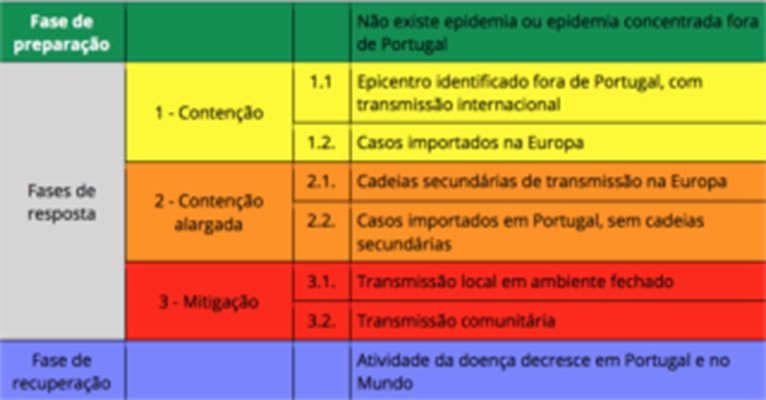 The National Plan for Preparing and Responding to Disease for COVID-19, released by the Directorate-General for Health (DGS), establishes the “strategic guidelines needed by the Health sector in the face of this threat in Public Health”.

The country’s response is split into three phases, including six sub-levels, according to the risk assessment of the virus and its impact on Portugal”, describes the document. After initial “preparation”, in which “there is no epidemic or concentrated epidemic outside Portugal”, there is the first phase (containment), the second (widened containment), and the third (mitigation).

During this phase, “the COVID-19 transmission chains are already established in Portugal, as this is an active epidemic/pandemic situation”. The containment measures are insufficient and “the response is focused on mitigating the effects of COVID-19 and reducing its spread, in order to minimize mortality - the relationship between the number of deaths caused by the disease, in a given location and period of time - and/or until an effective vaccine or new treatment appears”.

This implies, according to the DGS plan, that all public hospitals and private must be involved in the diagnosis phase and in case management, that patient isolation can be done in home and that the use of a mask can be recommended for people with “increased susceptibility” in contexts of large agglomerations or in health services. As of midnight this Thursday, hospitals and health centres will have to adapt to new and stricter rules in order to respond to the current phase of the virus in Portugal.

However, the DGS underlines that “the epidemiological evolution of the infection will determine the immediate adjustment of responses” which will be “continuously updated and adjusted as more accurate knowledge about the behaviour of the virus in human communities, transmission dynamics and diversity of responses emerges”.

The last phase is the recovery phase, a period in which “disease activity decreases in Portugal and in the world”.

So, how will this affect the general population? Well, it won’t really. Entering the mitigation phase simply allows for stricter rules to be placed within the healthcare system.