Inflation across the eurozone has reached a new all-time high of 8.9% in July, up from 8.6% in June.

A total of 10 states that use the single currency appear in double-digit territory: Belgium, Estonia, Greece, Spain, Cyprus, Latvia, Lithuania, the Netherlands, Slovenia and Slovakia.

The data from Eurostat is yet another ominous sign for the bloc's economy, which is gradually slowing down, raising the likelihood of a recession. 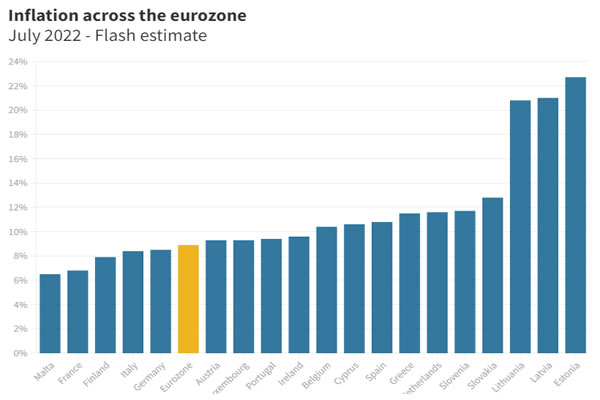 Prices in July continued to climb in most countries, pushed by the worsening disruption in global energy markets fuelled by Russia's invasion of Ukraine.

The upward trend in gas prices has spilled over to other products, including fresh fruits and vegetables.

The July reading shows a timid regression in energy inflation from 42% in June to 39.7% in July,  but an increase in all of the other indicators.

Core inflation, which excludes volatile items and gives a better idea of consumers' actual purchasing power, stood at 4%, the highest mark since the creation of the euro.

In Germany, the EU's industrial powerhouse, inflation rose to 8.5% on a yearly basis, after a small decrease last month (8.2%) that briefly raised hopes of relief.

The Baltic countries of Estonia (22.7%), Lithuania (20.8%) and Latvia (21%) remain particularly affected by the upward trend, due to their heavy reliance on foreign imports to meet their energy needs.

It is unclear when or how the energy crisis will begin to ease: the Kremlin has shown it is willing to manipulate gas flows in retaliation for Western sanctions.

Countries are already preparing for a worst-case scenario where Russia unilaterally interrupts all supplies and sends the EU into a deep, painful recession.

The latest inflation reading from Eurostat comes a week after the European Central Bank (ECB) announced a larger-than-expected hike in interest rates, the first move of that kind in 11 years.

The ECB has indicated it will continue hiking rates if the economic situation deteriorates, ditching the traditional forward guidance and embracing instead a meeting-by-meeting approach to decide its next steps.

July's inflation rate of 8.9% is more than four times the 2% target desired by the bank.

Even Malta, the eurozone member with the lowest inflation rate (6.5% in July), vastly overshoots the ECB's goal.

Partial GDP data, released last Friday, showed a 0.7% growth across the eurozone and 0.6% in the EU during the second quarter of 2022 compared to the previous period.

"Good news! Euro area economy outperforms expectations in Q2," Paolo Gentiloni, European Commissioner for the economy, said on Twitter. "Uncertainty remains high for the coming quarters: need to maintain unity [and] be ready to respond to an evolving situation as necessary."

The bloc's GDP data contrasts with that of the United States, whose  economy shrinks for the second consecutive quarter.

John,
As Russia turns the screw on German gas their manufacturing, which is financing the EU, will massively contract. Contributions to the Brussels sinkhole will disappear, handouts to the poorer nations in the south will cease and loans will be called in.
Hard times ahead as the EU implodes.
+3 #2 Margaridaana 2022-08-03 14:38
John, you have my vote!
+6 #1 John Martindale 2022-07-30 15:32
I predicted gas prices rising 5 months ago, people laughed at me, i predicted an economy on the decline at the start of the year, people laughed at me, so are people laughing at this article, let's see where the economy will be by christmas, i'm not laughing.
Refresh comments list