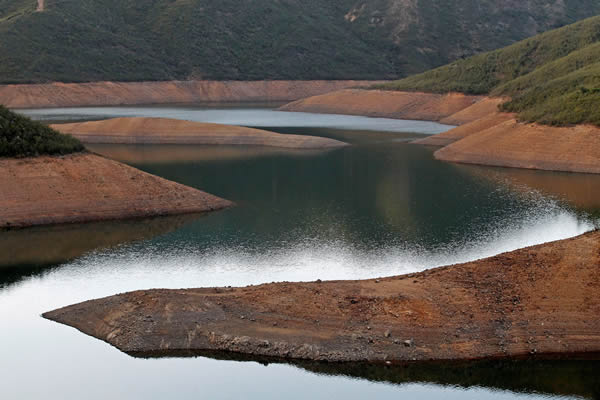 The latest rains had an almost zero impact on the water levels of dams in the Algarve and the available volume guarantees a year of public supply, according to a source from the Ministry of Environment and Climate Action (MAAC).

Asked by Lusa about the current situation of the dams, after the rains recorded in October, and about the effects of the drought in the Algarve, the ministry replied that “the total volume stored” in the regional reservoirs is 145 cubic hectometers of water and the public supply until 2023, in case the rains do not allow a recovery of the reserves.

The MACC clarified that the value of 145 hectometers refers to the total volume stored in the six reservoirs in the Algarve region - Arade, Bravura, Funcho and Odelouca, in the west, and Beliche and Odeleite, in the east - and noted that measures were adopted to promote a strategy to control water consumption and availability.

Water scarcity in the Algarve, one of the country's regions most affected by drought, is visible in the data made available on November 4th by Águas do Algarve, according to which the levels of the three dams under its management (Odelouca, Beliche and Odeleite ) oscillate between 17 and 14%.

Action is underway by those responsible in the region, accompanied by the “necessary funding” to implement “the main lines of action” via the Recovery and Resilience (PRR), which has a sum of 200 million euros for this purpose.

“The investment in progress, financed by the PRR, in the amount of 200 million euros, develops the bases of the Algarve Regional Water Efficiency Plan and favours the adoption of measures of minimizing water losses and water management, as well as the increase in water availability in the region”, said the MAAC.

“Strengthening the governance of water resources (five million euros), investing in the reinforcement and modernization of systems for monitoring availability and consumption” and “the use of treated waste water (23 million euros), through additional water treatment and transporting it to delivery points”, are other actions planned with funding from the PRR.

There are also plans to increase the “resilience of the existing high water reservoirs/supply systems (75 million euros), by reinforcing the connection between the supply systems in the east and west of the Algarve”, the reinforcement of “inflows to the Odeleite reservoir with an abstraction from the Guadiana river in Pomarão”, in the municipality of Mértola, and the “construction of a desalination plant (45 million euros)”, said the ministry.

MAAC stressed that management is being carried out “within the permanent commission for the prevention, monitoring and follow-up of the effects of drought, created in 2017, with the main objective “to safeguard public supply as a priority”.