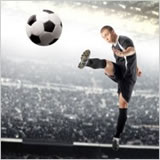 A Portuguese court is intent on putting on trial three British football fans 10 years after they were kicked out of the country.

The three are named in court papers revealed to Sky News ahead of a hearing in the resort of Albufeira on Tuesday, July 1st.

Sky Sport’s Martin Brunt wrote today that the case for the prosecution is that the fans attacked police and that one police officer needed stitches to a foot injury.

Richard Freeman and Lewis Andrews deny being involved in the clashes and Richard Freeman said today that he knew nothing of tomorrow's hearing claiming that he was wrongly arrested at the time.

Freeman was one of three dozen England fans arrested in the Algarve during several nights of violent clashes during the Euro 2004 championships. Freeman commented, "It's a farce. It's the first I heard of it. I'm certainly not going back to Portugal because they might arrest me. What chance would I have of a fair trial?”

The three fans will be only too aware of the fate of football fan Gary Mann who was extradited to Portugal and imprisoned.

According to Fair Trials International, Mann was extradited to serve a 2 year prison sentence imposed following a trial in Portugal in 2004, described by a UK court as “so unfair as to be incompatible with his right to a fair trial.”

Mann was arrested in Portugal in 2004 where he was attending the Euro 2004 football tournament and was tried and convicted in the space of 48 hours for 'involvement in a riot.'

A British police officer present at the trial described it as a farce as Mann had no time to prepare a defence and standards of interpretation were grossly inadequate.

The UK courts have repeatedly recognised the serious injustice in the Mann case but said they were powerless to stop his extradition after his arrest under the controversial European Arrest Warrant system, despite a senior UK judge describing the case as an “embarrassment.”

Mann was transferred to a UK prison on the 19th May 2011, and was eventually released from custody in August 2011.

The latest three men to be named by the court and expected to turn up for trial tomorrow, July 1st, have no intention of doing so which raises the possibility of their being tried in their absence and European Arrest Warrants being issued for their deportation to Portugal to serve time.

Most of the several dozen 2004 ‘rioters’ were held for a couple of days, deported and banned from returning to Portugal for a year.

Many then were met at Heathrow airport by Metropolitan Police, questioned and told they would face no further action.

Lewis Andrews said police had told his parents six weeks ago they had a letter from Portugal for him, but he had heard nothing directly. Andrews said, "Why are they suddenly bringing this up again after all this time? What do they hope to achieve?

The third man wanted for trial is Wayne Finney from Nottinghamshire whose girlfriend said that he knew nothing about the new court hearing.

Court papers suggest another 21 of the 2004 deportees were considered for prosecution but too much time has elapsed. The Portuguese prosecutors had until December 2014 to put the other three on trial and are intent on doing so whether the men are there or not.

+3 #3 Beryl. 2014-07-01 11:32
As already stated in several Brit expat comment websites like this one – there is a clear link between the Portuguese 'resurrecting' this nonsensical 10 year old street riot case and the Missing Maddie McCann investigation. To signal to a few die hard Portuguese nationalists that 'We will not let the British Ultimatum us again !!' Push us around without us landing a few time wasting irritations in return!!

Also – as already asked - why no accurate ID of the rioters ? Is this not a clear example of the Portuguese elite's neurosis about them being photographed doing anything illegal and the rigorous application of the Illicit Fotografia law.

And therefore exactly why – the Portuguese Police lacking any practice in photographing illegality and also not wanting to photograph someone of 'importance' in the crowd - identifying was so inept back in 2004.

And - even today - why no Police wanted posters are ever seen!
+4 #2 Wandsworth 2014-07-01 09:38
It is also strange that the 'high and mighty' - as in bank savings theft and submarine fraud - can claim 'bias' when faced with damaging evidence proving their involvement.

But ordinary Portuguese and British foreigners, in this case faced with very inadequate ID to prove they took any part in a riot ... do not have this 'defence'.

Note that back in 2004 the Portuguese police had no procedure for photographing street hoodlums .... so clearly, any bald British thuggish looking geezers, were suspect. Pulled in by the GNR and accused of being involved.

Onlookers obviously being safer to pull in than the real trouble makers .... as GNR boots were clearly not able to offer proper foot protection in a scuffle.
+6 #1 mm 2014-06-30 20:04
sky news said today that the day after they were arrested they were deported and told never to return - strange in the uk its takes years to deport people but here it takes a day
Refresh comments list