Açores - US withdrawal may cause 10,000 locals to leave 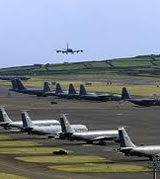 The reduction of civilian personnel at the Lajes US airbase in the Açores could lead to the eventual emigration of 10,000 inhabitants of Terceira island.

Studies released by the University of the Açores estimate emigration of between 5,000 and 10,000 people if the US military reduce its operations and associated local personnel to the level it plans and if there is no effort to create jobs in other industries on the remote island.

According to professor Tomaz Dentinho there have been three studies by the University which point to a drop in the gross domestic product of the island of between 8.8% and 12% as a result of job losses at the air base.

When adding the wider economic affect of associated job losses the affect on island GDP is doubled.

Professor Dentinho said that if the US pulls out as intended and if nothing fills the gap people simply will become poor or leave, following a long tradition of emigration to the US and Canada so that within 5 to 20 years the population of Terceira will have decreased by 10% to 20%.

The economics professor argued that it is possible to halt this scenario by arranging alternative employment on the island, but he considered it best to renegotiate the Agreement on Cooperation and Defence between Portugal and the United States, which at the moment prohibits the air base being used to land civilian air traffic which could boost tourism.

The number of Portuguese workers at the Lajes Air Base has been falling anyway but the US has never before announced such a big drop in civilian personnel.

By autumn this year the US intends to reduce the current Portuguese workforce of over 800 to 370, but trade union and local authority estimates point to the loss of 1,500 jobs when allied, dependent employment is taken into account.