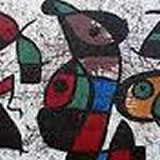 Banco Português de Negócios (BPN), was the bank that the government controversially bailed out in 2008 after reckless management and malpractice has created an initial debt of €1.8 billion.

José Oliveira e Costa, the former President of BPN is the man held mainly responsible for the financial scandal that resulted in the bank being sold off to the Angola’s Banco BIC for €40 million in 2011.

The bank's art collection, including 85 works by the Catalan artist Joan Miró acquired from a private collection in Japan between 2003 and 2006, became state property in 2008 as part of the nationalisation.

At the end of 2012, the total damage to the Portuguese taxpayer amounted to €7 billion.

More than five years later, the trial enters the stage at which sentences will be handed out for tax fraud, money laundering, forgery, abuse of credit and illegal gains.

José Oliveira e Costa was absent from the court for health reasons but is but one of the 15 accused.

The closing arguments from the State Prosecutor included a call for between 13 and 16 years in prison for Oliveira e Costa.

For Luís Caprichoso, who was second-in-command at the bank and who managed the subsidiary company Sociedade Lusa de Negócios (SLN), later renamed the Galilei Group, the prosecution has asked for 10 to 12 years in prison.

Vaz Mascarenhas, who was president of Banco Insular which was used to conceal several dodgy operations and the payment of bribes, may get 9 to 10 years in prison.

This major collapse and bailout in 2008 set the scene for Portugal’s taxpayers to fund collapse after collapse with the bankers remaining free to live lives of relative luxury while the public ended up paying for their criminal activities.

For any British still unsure of how to vote on June 23rd consider the depths of the deviousness of these particular south Europeans. Explaining so well from which nationality the '50,000' donations into the anti-McCann campaign came from. Not the British!

But also showing from where the UK Government should start reclaiming from June 24th funds to compensate the British who have been unfairly and so often illegally treated in Portugal over the last 30 years.
+2 #1 Mutley 2016-06-01 18:38
They will be fined several thousands of Euros and a prolonged suspended jail term. That'll teach them!!
Refresh comments list