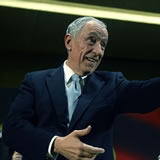 The manager, Fernando Santos, and each member of Portugal’s winning football team is to be awarded the Commander of the Order of Merit.

A delighted president, Marcelo Rebelo de Sousa, said, simply, "We are the best!'

The president made the announcement on RTP after Portugal beat France in an epic Euro 2016 final that saw Portugal's Cristiano Ronaldo stretchered off amid French booing having succumbed finally to a knee injury inflicted by Dimirti Payet in the 8th minute.

Deprived of its leader, the Portuguese team held together well and in a game that saw many missed chances, balls hitting both teams' goal posts, a deadly strike from Éder in the 110th minute had Portuguese celebrating victory across the world with just minutes to go before the final whistle of extra time.

Rebelo de Sousa commented, "I said we were the best in Europe and we are the best in Europe. We suffered a lot but we showed that we are strong, together we are able to endure anything. The predicament of Cristiano Ronaldo posed enormous difficulties, the enormous fatigue and the ability to change tactics, rethink and dominate the game. This is Portugal at its best.

“We took a joy to the people. The joy that will be there tomorrow when people show up for work – it’s the best. We are the best."

"I had decided that, whatever the outcome, I would decorate them with the order of merit. The award is going to be higher - it will be the Commander (of the Order of Merit) which is a level that has never been given."

"(Getting to) the final was already a big prize, but this victory is unique.”

Whatever commentators' views on the standard of play in this final, Portugal's determination was impressive and having been deprived of its star player, pulled it together for an impressive victory that, for a while at least, overshadows all the other national problems that normally fill the nation's papers. Ed, it is unusual for you to carry a sports story. And although sports reporters have suggested that this final was a tedious affair, it is somehow fitting that Portugal should win after the French had kicked Ronaldo off the pitch.

Not tedious at all, especially when immersed in a crowd of local 'experts' - this was edge of the seat stuff and yes, French booing and the targeted assault on Ronaldo was not the most gentlemanly behaviour...
-3 #1 Peter Booker 2016-07-11 08:11
Ed, it is unusual for you to carry a sports story. And although sports reporters have suggested that this final was a tedious affair, it is somehow fitting that Portugal should win after the French had kicked Ronaldo off the pitch.

The award of the rank of Comendador in the Ordem de Mérito was made in 2004 to the members of the pop group Xutos e Pontapés. I think that the footballers deserve at least one rank higher.
Refresh comments list