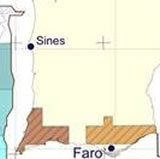 The Secretary of State for Energy, Jorge Sanches Seguro, is to use all legal means possible to reverse the oil and gas exploration and extraction concession granted to Portfuel covering much of the Algarve’s onshore territory.

This major statement by a senior government representative is the first concrete sign that it now considers tourism in the Algarve as the overwhelming priority and will now go to court to overturn the Portfuel concession which Seguro considers, “should not have been given."

"Nothing will be done in the Algarve to undermine values ​​of tourism and environmental issues. The previous government decided to allocate about 48% of the Algarve territory to a company that had no experience in oil exploration," says Jorge Sanches Seguro, echoing the call from environmental organisations that have battled to halt development of the Algarve as a petrochemical zone.

The Secretary of State considers that Portfuel should not have been given the concession, "from a legal point of view" and even less from "political point of view."

Seguro sides with the region’s mayors, saying they had not been consulted during the process, nor had the Algarve population or their MPs, adding that, until now there had been "no possibility of cancelling any contract."

Advising caution when looking at spending taxpayers’ money on legal proceedings when the outcome is not certain, the Secretary of State said that one thing is guaranteed, nothing will be done in the Algarve to undermine tourism, the environment, and the democratic participation of the people.

As for the recent ruling from the Attorney General that the Portfuel contract was valid, Seguro’s view is that the company has not met all the legal requirements in the application, including the balance sheet for the last three years and demonstrating relevant experience, when the company has no experience in oil exploration.

"In the Algarve there is a something very important, tourism. And besides, there also are environmental issues."

In addition to this good news for those determined the Algarve should remain untroubled by an oil or gas industry, Seguro also is well aware of the funding available for energy efficiency and renewable energy development and later in July will launch a competition in the area of ​​renewable energy.

+2 #3 Peter Booker 2016-07-19 08:53
Petra is right about the good news, and I hope that Sr Seguro is as good as his word when it is necessary to consult over the siting of renewable energy plant. The solar panels, for example, near the Loulé heliport are unsightly, and perhaps too close to population centres.

There is plenty of sunny scrubland in the Algarve away from population for this type of installation.
+4 #2 Christian 2016-07-19 08:32
As far as I know, he also said in an interview that the off shore concessions should remain in place. All the more reason not to rely on the politicians but to keep the protest going. Tavira em Transição invites everyone to come to the Sunset Party on 23 July at 16:00 and joint the Human Chain on 24 July at 10:30h, both on the Ilha de Tavira beach.
+4 #1 Petra 2016-07-18 22:52
Good news and well done to ASMAA for getting this hidden agenda out into the open. Sr Seguro sounds to be fully on our side - great to have an ally in a position of power. Next, the offshore contracts!
Refresh comments list